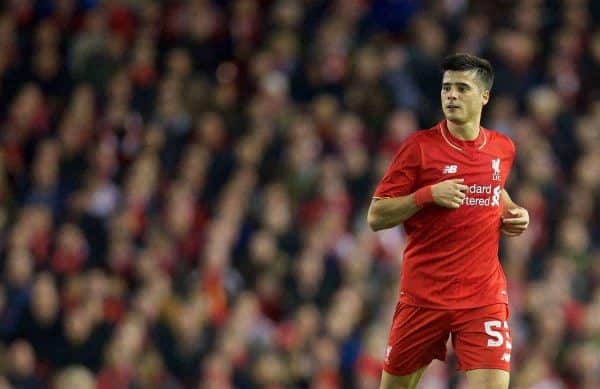 Joao Carlos Teixeira: “For now, my plans are to stay with Liverpool”

Entering the final months of his contract, Joao Carlos Teixeira is looking for more game time before he extends his terms with Liverpool.

Teixiera made a rare starting appearance for the Reds in Saturday’s 0-0 FA Cup fourth-round draw at home to West Ham United, with the Portuguese’s game time largely restricted to cups under Jurgen Klopp.

As the last months of his Liverpool contract dwindle, Teixeira is believed to have been in talks with the club about extending his terms.

But speaking after Teixeira scored his first Anfield goal, in January’s 3-0 win over Exeter City—also in the FA Cup—Klopp hinted at a possible departure for the midfielder.

“I like Joao. As a person, as a footballer,” he told reporters.

With the likes of Adam Lallana, Roberto Firmino, Philippe Coutinho, James Milner and Jordon Ibe ahead of him in the first-team pecking order, Teixeira may find his options limited.

Furthermore, with impressive Sheyi Ojo making waves in his fleeting appearances under Klopp, Teixeira finds himself under even more pressure.

After the Reds’ stalemate against West Ham, Teixeira suggested that this lack of game time could see him move elsewhere.

“I haven’t played much. I’ve been on the bench a lot and I don’t like that,” he said.

“I’ve played five times for the first team and I’ve scored my first goal at Anfield which is special. It’s been good, but I need to play more.

“I’m here to work and show I can play more.

“For now, my plans are to stay with Liverpool and play more here, but you never know what will happen in the future.”

Having made his full debut for the club earlier this season, Teixeira finds himself in a troubling position.

Now 23, the former Sporting CP talent is arguably behind on his development, but has shown flashes of true quality in his appearance for Liverpool so far this season.

Much like Jon Flanagan, Teixeira is making up for lost time in 2016, and it is up to him to prove he should remain at Anfield for the long term.