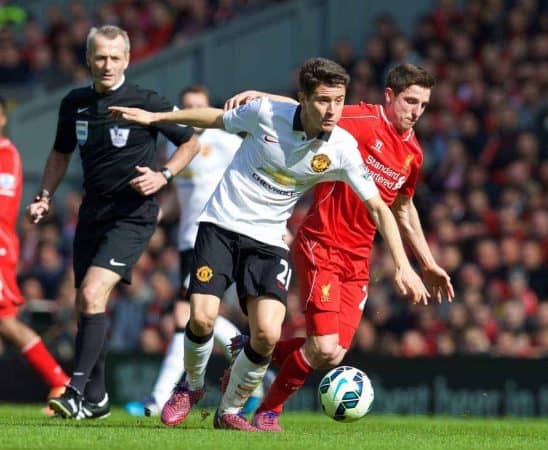 Liverpool reignite their rivalry with Man United at Anfield on Sunday as the Reds search for their first Premier League win of 2016.

Jurgen Klopp‘s Reds attempt to build on Wednesday night’s late show with a grudge match victory in the biggest game of the English footballing calendar.

Having closed the gap on fourth place in midweek, Klopp’s men look to gain further ground with a confidence-boosting win over Louis van Gaal’s side at an electric Anfield, as the Reds seek to claw their way back into the increasingly tight race for Champions League football.

The Liverpool boss is set to have a similar squad to that of the Gunners draw at his disposal for the fifth game since the turn of the year, in which Liverpool seek to end United’s recent dominance of this fixture with a first win since the Old Trafford destruction of March 2014.

The Reds have endured a miserable recent record against United, losing four of the last five games – a run Klopp’s side look to improve in Sunday’s 194th meeting between the clubs.

Liverpool have also lost two of the last three Merseyside games – last tasting victory in September 2013 thanks to Daniel Sturridge’s header – but the Reds have traditionally had the better of United at Anfield, winning 43 of 88 clashes.

The corresponding game last season came at a crucial time of the campaign with the Reds in the middle of a revival, but Brendan Rodgers’ side bottled the big occasion, slumping to a 2-1 loss in what proved a season-derailing result.

Juan Mata slotted United ahead, before a moment of madness saw Steven Gerrard sent off just 38 seconds after entering as a substitute, with Mata then doubling United’s lead prior to Sturridge’s consolation strike for the 10-man Reds and Wayne Rooney’s missed penalty.

Klopp and van Gaal have faced off four times previously, with the Reds boss losing twice but winning both of the last two meetings, a run he hopes to continue with a first Premier League success.

It’s been a poor season for United who sit three points ahead of Liverpool in 6th place and also come into the clash following a pulsating 3-3 draw, held by relegation-threatened Newcastle.

Van Gaal’s side arrive on Merseyside having ended a run of three straight defeats with two draws and a win – their only victory in eight league games.

Four of the Red Devils’ five losses this season have come on their travels which will provide optimism for Liverpool, who have lost only once at home under Klopp.

The Reds come into the game buoyed by rescuing a late point against Arsenal to avoid a second straight league defeat.

Consistency evades Liverpool, who have won, drawn and lost two of their last six games, and Klopp will hope a first win of 2016 over van Gaal’s men can provide a season transforming result.

Similarly to Klopp, van Gaal – who has won all three of his previous meetings with Liverpool – has some injury concerns and a depleted squad his disposal.

The Anfield trip is set to come too early for Phil Jones and Bastian Schweinsteiger to feature, with the pair struggling with knee and ankle injuries respectively, while Michael Carrick is also ruled out,

Long-term absentees Antonio Valencia, Marcos Rojo and Luke Shaw all remain side-lined, but Adnan Januzaj is closing in on a return to action and could feature on the bench.

The United boss could name the same XI that claimed a draw at St James’ Park on Tuesday night, though he could introduce Mata or big-money summer signing, Memphis Depay, who both entered as substitutes in the  stalemate.

Klopp enjoyed success over van Gaal when his team pressed and ruffled the Dutchman’s side, and chasing a pedestrian United team with plenty of forward runners, while dominating the midfield battle could see the Reds enjoy a good afternoon.

What the Managers say:

Klopp spoke of the importance of the game and his respect for van Gaal in his pre-match press conference:

“Sunday is important for the table because we are close together. Both teams need the points – derbies are the salt in the soup!

“It’s a special game for me and for the club. I enjoyed the atmosphere against Arsenal, but I think we can do better.

“He [van Gaal] is one of the most successful managers in the world. He has a special idea of football and you have to respect this.”

Ahead of the Anfield trip van Gaal discussed Klopp, and the significance of the game said:

“We need to be aggressive but also under control and that is always difficult because the passion to play in these games is very high.

“I know that it’s an important game for the fans. I think everybody is ready and we have to show it.”

“He [Klopp] is very capable to be a manager in the Premier League because he has shown always this kind of football and I think the fans shall love it.”

The most eagerly anticipated game of the season will be shown live on Sky Sports One for UK viewers, with the match available around the globe on channels such as SuperSport3 Africa, Sky Mexico, Fox Sports, NBCSN, Canal+ and StarSports Asia.