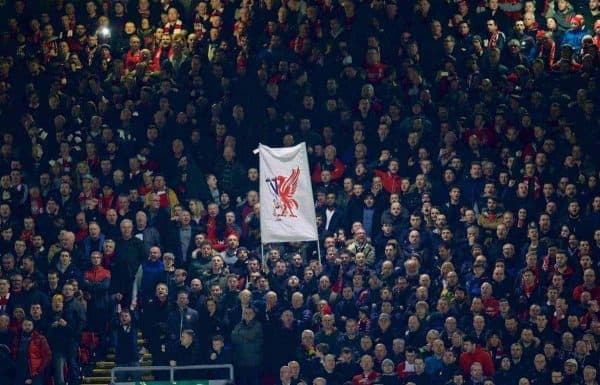 Football has taken advantage of its fanbase for too long – Where does it end?

There seems to be a divide on what is, to me anyway, something that should unite us, writes Chris Williams.

#WalkOutOn77 was orchestrated by Spion Kop 1906 in response to the news from Liverpool FC that there will be an increase in some ticket prices next season with prices topping out at £77.

Why is there any ticket price increase? With the latest TV deal bringing in over £8 billion to the league, is there any need for ticket prices to increase? Opponents to Saturday’s walk out will quote three specific examples of why not:

“What will it achieve? We should be marching on the Premier League headquarters they are the real perpetrators”.

I hate to disappoint you but this has been done already and what did it result in?

A refusal to stop milking the cows? No. Did it result in a cap of the cost of away tickets? No. This is the next level.

Liverpool FC used to set trends; it shook the Football League up with regards to commercialisation when it was the first club to introduce shirt sponsorship.

The owners had a real chance to use the extra millions of TV money to make a stand to reward its “customers” with an incentive to keep coming back. There was a real chance to cap ALL tickets at a £30 max for adults and £15 for children, not to offer a minimal amount of tickets for £9 whilst offsetting that with £69 tickets in the new Main Stand.

“Stay and support the team, you walked out we lost 2 points”.

I’m blunt with my answer to this: If the walk out cost us two points today but it comes at the benefit of future generations of fans who don’t get ripped off then so be it.

“No one has a divine right to tickets, if locals can’t afford it that’s tough”.

This isn’t about where you are born it’s about your attitude.

I can afford a hike in price; I can probably afford a further hike in prices but guess what? I couldn’t have done when I was 16 or 17 – who is safeguarding the next generation of fans? Not to mention those families that can no longer afford to go because the cost of tickets doesn’t relate to the cost of living. Do we really just want people who can afford tickets now? £77 top price today, £95 in two years time? Where does it stop?

The price of a Premier League ticket for Liverpool v Everton in the Main Stand in 1994 was £9.50, this was swiftly followed by a dramatic increase in price; we were told we needed to do it to compete. Today, 22 years later, that £9.50 will top out at £69 next season for a Cat B game. £69 is not what football was built on, £69 is not what the Premier League was founded on and the constant drive for more money has taken us there.

Where does it stop? Do tickets top out at £100 a match and if they do who goes? 54,000 people with “selfie sticks” going to one match a season? Football has a loyal base of supporters built up on over 100 years of attendance, if you think that it is fair to turn your back on that demographic because we live in a modern world then football has no place for you.

Supporters back their team through thick and thin; that is why when they are moved to walk out on something they hold so dear it should not be ignored. Customers change their allegiance to brands constantly and this is what will happen to football when your average man is finally priced out, football will morph into American football where franchises move their club’s around to fit the best deal and customers change depending who the current champions are.

This extra rise in ticket prices will bring Liverpool an extra £2 million a season, what can the club actually do with that? It’s a tiny figured argued over in transfer negations for 20 seconds but to the average man in the street a freeze in prices make it just about still affordable; a reduction in price makes it realistic.

Alan Shearer said on Match of the Day: “With the new TV deal not one fan should be facing an increase in ticket prices, tickets could be reduced to 10 or 20 quid.”

Hours earlier on a live International Broadcast TSN’s Kristian Jack said he “Fully supported everyone who walked out, enough is enough.”

He then went on to reiterate it later in a conversation to me:

The Independent, The Telegraph, The Times, Match of the Day, the Premier League’s own international broadcast partners can see it and even France’s biggest daily newspaper can see it.

When the “I’m aright Jack” contingent finally become un-alright because they can no longer afford it, it will all be too late.

In December last year I was lucky enough to go to two Bundesliga games, the tickets for two games cost less than the price for one ticket at a Premier League ground. The Germans have everything we can only dream of. This isn’t some pie in the sky fantasy, affordable football for the masses works week in week out in one of Europe’s top leagues; the home of the current World champions.

Football without fans is nothing.