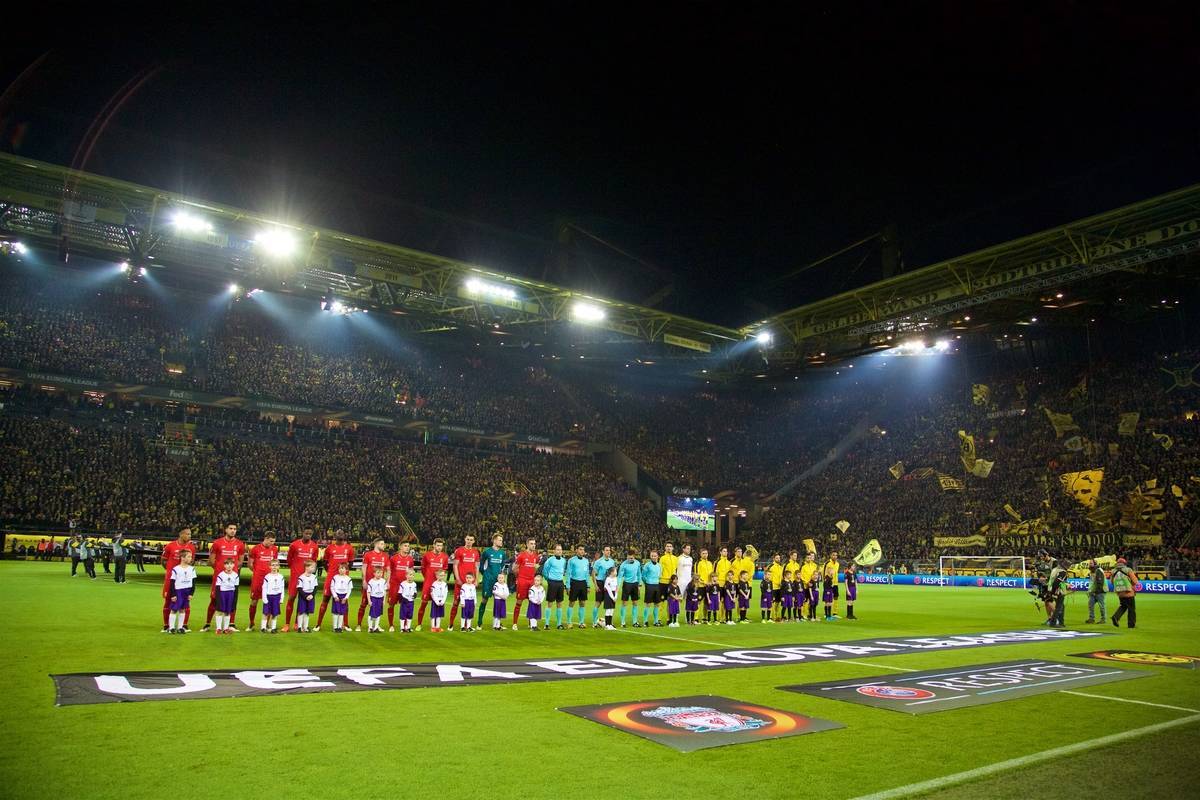 Liverpool welcome Borussia Dortmund to Anfield on Thursday evening in the second-leg of their Europa League quarter-final duel.

Nights like these don’t come around too often for Liverpool supporters and the visit of Dortmund could be a memorable evening on Merseyside.

The Reds earned a very credible 1-1 draw at Signal Iduna Park last week, with Divock Origi‘s opener cancelled out by a Mats Hummels header early in the second-half.

Jurgen Klopp‘s side showed that they can hold their own against an extremely talented Dortmund outfit, but they will have to be at their very best on Thursday, if they want to reach the Europa League semi-finals.

This is, without question, Liverpool’s biggest game of 2015/16, but the hope is that even more important games will come in the next round.

Klopp’s men warmed up for Thursday’s much-anticipated showdown with a comprehensive 4-1 victory over Stoke City on Sunday.

Origi scored twice as a second-half substitute, Daniel Sturridge also found the net and Alberto Moreno opened the scoring with his first goal of the season.

It was a hugely positive result for the Reds, with Klopp making seven changes to the team that started in Germany three days earlier.

Liverpool have now suffered just one defeat in their last 10 matches in all competitions, with the solitary loss coming at Southampton on 20th March.

Dortmund boss Thomas Tuchel clearly sees the Europa League as his priority this season, with the 42-year-old surprisingly making eight alterations for the trip to rivals Schalke on Sunday.

BVB drew 2-2 in their Bundesliga clash, despite leading twice, with Shinji Kagawa and Matthias Ginter on the scoresheet. The dropping of two points has effectively handed Bayern Munich the title.

The German giants have enjoyed a truly formidable run of form, though, and they remain undefeated in 2016. Tuchel will hope his decision to rest key players pays dividends at Anfield.

Few sides in Europe are brimming with as much confidence as Dortmund, but Klopp will take plenty of positives from how his side dealt with them in the first-leg.

Klopp has an almost fully fit squad to choose from, and Liverpool’s performances in the last few months have shown what can happen when injury problems are eased.

Jordan Henderson is definitely out, and could miss the remainder of the season, while Joe Gomez and Danny Ings continue to recover from serious knee injuries.

Emre Can will return to the midfield – he is halfway through a two-game domestic suspension – while Mamadou Sakho and Dejan Lovren will come in for Martin Skrtel and Kolo Toure at centre-back.

The biggest dilemma Klopp will have is how to line-up in attacking areas, with Philippe Coutinho, Adam Lallana, Roberto Firmino, Sturridge and Origi all potentially vying for three starting berths.

Will he go with a 4-4-2 diamond, with Sturridge and Origi up front? Does he start neither, with Firmino as a false nine? All will be revealed on Thursday.

Tuchel has similarly strong options heading into the game, with Neven Subotic the only noticeable long-term absentee.

Influential midfielder Ilkay Gundogan is likely to return at Anfield, which will act as a huge boost to the Bundesliga side.

The world-class attacking trio of Marco Reus, Henrikh Mkhitaryan and Pierre-Emerick Aubameyang were all rested against Schalke, and will be raring to go on Thursday night. Tuchel has vowed to attack at Anfield, saying his side were distracted in the first-leg last week.

“We are here to attack and here to take risks,” he said at his pre-match press conference at Anfield on Wednesday night.

“We don’t want to score one, we want two or even more. We want to see what is possible in terms of our potential.”

Klopp, speaking earlier in the afternoon at Melwood, refused to give away much on team selection, instead using the opportunity to raise the crowd.

“In my opinion, the atmosphere can be the biggest difference,” he said, claiming that the crowd can be more important than last week’s away goal.

“It is always about being brave, especially against a high-quality team,” said the manager.

“Being brave is one of the most important things in football – tomorrow night too.”

The tie could barely be more perfectly poised, and the odds very much reflect that.

Despite only managing a draw at home in the first-leg, and conceding an away goal, Dortmund are still 8/11 favourites to progress to the semis. Liverpool are evens.

The Reds are 9/5 to win on the night, which would guarantee they qualified for the last-four, while BVB are 6/4 to secure victory inside 90 minutes. A draw is 9/4.

Aubameyang, an unstoppable force in front of goal all season, is the 9/2 favourite to open the scoring at Anfield, with Sturridge not far behind at 5/1.

Origi has scored three goals in his last two appearances, so backing him to find the back of the net first at 7/1 could be a shrewd bet. Coutinho, often Liverpool’s man for the big occasion, is 8/1.

The match is live on BT Sport Europe in England, with coverage starting at 7:30pm (GMT). Kick-off is at 8:05pm.