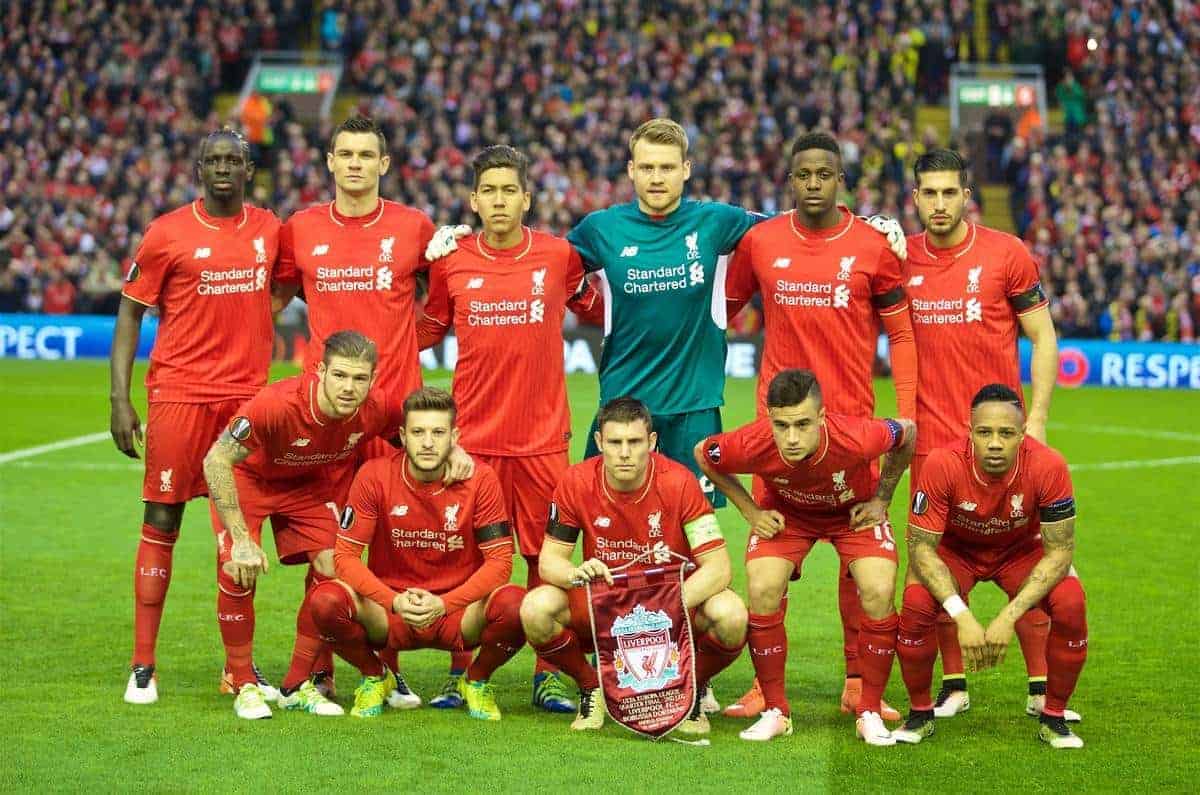 James Nalton was at Anfield and attempted to mark the players out of ten on this crazy and ultimately joyous night.

Liverpool progress to the semi-finals of the Europa League after producing another memorable comeback in European competition. Borussia Dortmund were widely regarded as the best team remaining in the competition, and at time this showed, but at times they were as defensively calamitous as Liverpool.

Made a great close range save from Aubameyang but none of his team-mates were on hand to pick up the pieces as Henrikh Mkhitaryan put away the rebound.

More of the same from the Belgian with the ball, as he was inconsistent with his kicking, but threw in the odd good save.

Defended better than most of his team-mates even though he was tested to the limit by Reus, and also made some useful contributions in attack.

Was left exposed as Reus marched past him to score Dortmund’s third. Maybe he could have engaged the Dortmund wide-forward earlier, but he had every right to expect those in front of him to deal with the situation earlier in the move.

Lovren’s performance summed up the game. He was poor in defence, but he did something at the other end of the pitch which made the night special.

The Croatian went walkabout for the first Dortmund goal and was troubled constantly by Aubameyang’s pace and movement. Was dragged out of position far too easily, and his  which left the back line ragged.

Played a good cross in for Origi at the end of the first half after finding himself high up the pitch on the right following a previously cleared corner. Made a good tackle o Reus shortly after

If he or Sakho are stepping out of the line as high as they do, then they have to get the ball, and this was rarely the case for Lovren tonight.

Appeared to relish attacking situations however, as he won a corner in the build up to the third goal, and saw a Volley fly over with five minutes to go.

Then with zero minutes to go he won the game for Liverpool with a towering header – so forget any of the negative things written in the previous few paragraphs.

As with Lovren, he was poor for the majority of the game from a defensive point of view. but contributed greatly to the events which unfolded at the end.

He played Aubameyang onside for the first two Dortmund goals, but made one great recovery tackle on the Dortmund striker which might have prevented a third.

However, he then went on to play Reus onside as Dortmund did score a third goal, and this sloppiness in the backline was a theme of his and Lovren’s play throughout the evening.

Despite his poor defensive showing, he was on hand to head in Coutinho’s corner and set up the finale of all finales.

The Spaniard runs up and down the left like like his batteries are charged to 200%. He’s always running, even when he shouldn’t be.

The left-back won a couple of recovery tackles but these were usually because he was out of position in the first place.

The German fought a lonely battle in the centre of the park, but fought it well. He looked calm in possession and strong in the challenge, and his side could have done with two of him tonight.

It was his pinpoint through-ball which led to Origi’s goal, and he led the team from the heart of the midfield before being taken off with a shin injury in the second half.

Far better in attacking positions than he was in his role in midfield alongside Can where he was constantly playing catch-up when Dortmund had the ball.

His suitability in a more advanced role was demonstrated when he played a good return pass to Coutinho for Liverpool’s second goal.

Made up for his night of poor corners by putting the ball on Lovren’s head for the winner.

Played a good ball through to Origi in the first half, but then a swipe at thin air when the ball fell to him in the box in a dangerous position left him red-faced.

He couldn’t get into the game from his position on the right, and was withdrawn as a result when Liverpool were chasing the game.

Gave the ball away for the second goal in a similar fashion to Coutinho for the first. Saw a well-executed header from a Coutinho cross sail wide.

Linked up well with his Brazilian team-mate towards the end of the first half and showed some neat touches in and around the box.

Was taken off along with Lallana after an hour.

His stray pass to Moreno led to the Mkhitaryan goal but you’d expect this to then be dealt with by the defence.

A one-two with Milner presented him with a chance to shoot from distance, and he steered it perfectly into the net in front of the Kop.

Contributed to a lot of what was good about the team with some excellent all-round centre-forward play. He held the ball up, ran the channels, linked up well, and ran hard in defence.

His flick on Milner’s cross in the first half drifted just wide, but he sent Anfield into raptures at the start of the second half when he latched on to Can’s pass and poked the ball under Roman Weidenfeller.

The Belgian was a great foil for Daniel Sturridge when Liverpool were chasing the game late on.

Saw one snapshot shortly after coming on drift over the bar into the Kop, but in general he offered an element of control in midfield which was missing for Liverpool in the first half.

Didn’t take him long to get involved in a good attacking move, as he set Countinho up for a great chance which the Brazilian turned down – choosing to pass to Origi instead

Made a poor decision of his own shortly after when through on goal, as his ball into the box was probably the most ineffective choice he could have made as it was collected easily by Weidenfeller.

Might have got a flick on the Coutinho corner from which Sakho scored, and even if he didn’t touch it, his movement confused the Dortmund defence.

Slotted into the defensive midfield position where he won a few headers and committed the odd foul.

Picked only one recognised central midfielder in the shape of Emre Can, and this showed.

His backline was also needlessly pro-active in a game which needed to be kept tight, especially considering Dortmund’s counter-attacking prowess, but the second-half changes may have made up for it.

However, his changes in the second-half fixed a few of these problems, and the introduction of Allen on the hour mark added an element of calmness in a chaotic game.

The introduction of Sturridge was an attempt to salvage a win from an almost impossible position, and though the English striker didn’t score, the shape change which his introduction forced was a big part of the attacking joy which the side had for the last half hour.

His motivation of the players from the touchline is constant, and surely played a part in the win as the players kept believing they could turn the game around – right until the last.