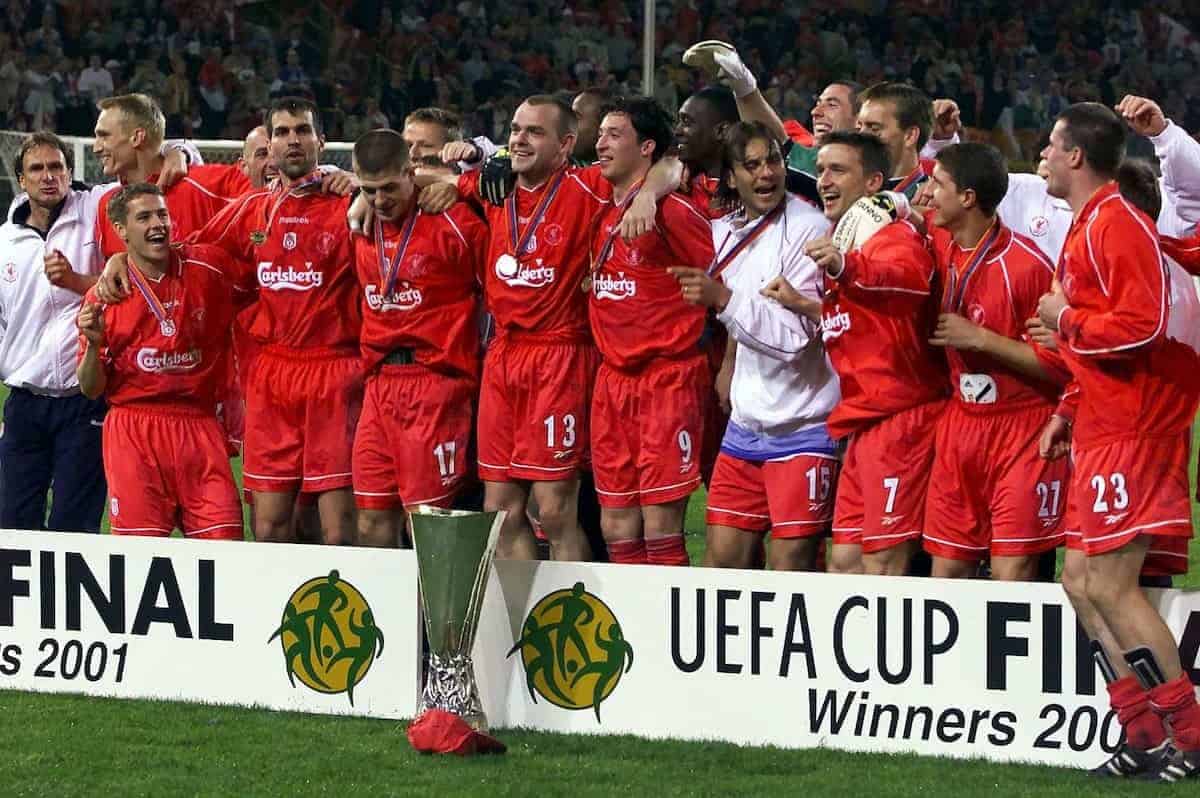 It is exactly 15 years since Gerard Houllier’s Liverpool completed a remarkable cup treble by beating Alaves in the UEFA Cup Final.

The 2000/01 season was one of the most memorable in the Reds’ recent history, following a hugely disappointing decade that preceded it.

A third-placed finish in the Premier League ensured Champions League football would be at Anfield for the first time the following year, but it was in the cup competitions where Liverpool really came alive.

The League Cup final victory over Birmingham City in February sealed the first piece of silverware of the campaign, before a Michael Owen double almost single-handedly inspired the Reds to an FA Cup final triumph against Arsenal.

It meant Alaves stood between Houllier’s men and an incredible treble, and what followed was a thrilling night at Borussia Dortmund’s Westfalenstadion.

Liverpool got off to an absolutely flying start, with Markus Babbel powering home a header and a young Steven Gerrard finishing clinically, and they appeared to be coasting towards another trophy.

Ivan Alonso’s header reduced the deficit, but Gary McAllister’s penalty, awarded after Owen was brought down by goalkeeper Martin Herrera, made it 3-1 before half-time.

Three minutes after the restart, highly rated striker Javi Moreno pulled a goal back, and soon after, his low free-kick stunned the Merseysiders and made it 3-3. Robbie Fowler looked set to have become the hero when he caressed a shot into the bottom corner after 73 minutes, but former Man United man Jordi Cruyff equalised with a header in the last minute.

The game went to extra time, and with the Golden Goal rule still in place at this time, the tension inside the stadium was unbearable.

It was Liverpool who got the trophy-clinching goal, as McAllister’s free-kick from out wide was headed into his own net by Delfi Geli.

The goal sparked joyous scenes – there were actually some Reds players who didn’t even know they had won – and unbelievably, a third trophy of the season had been won.

It signalled the end of a quite unforgettable season for Houllier and his team, and it remains a year that will be talked about forever.

Let’s hope Jurgen Klopp‘s men can bring the Europa League trophy home on Wednesday evening, when they take on Sevilla in Basel.