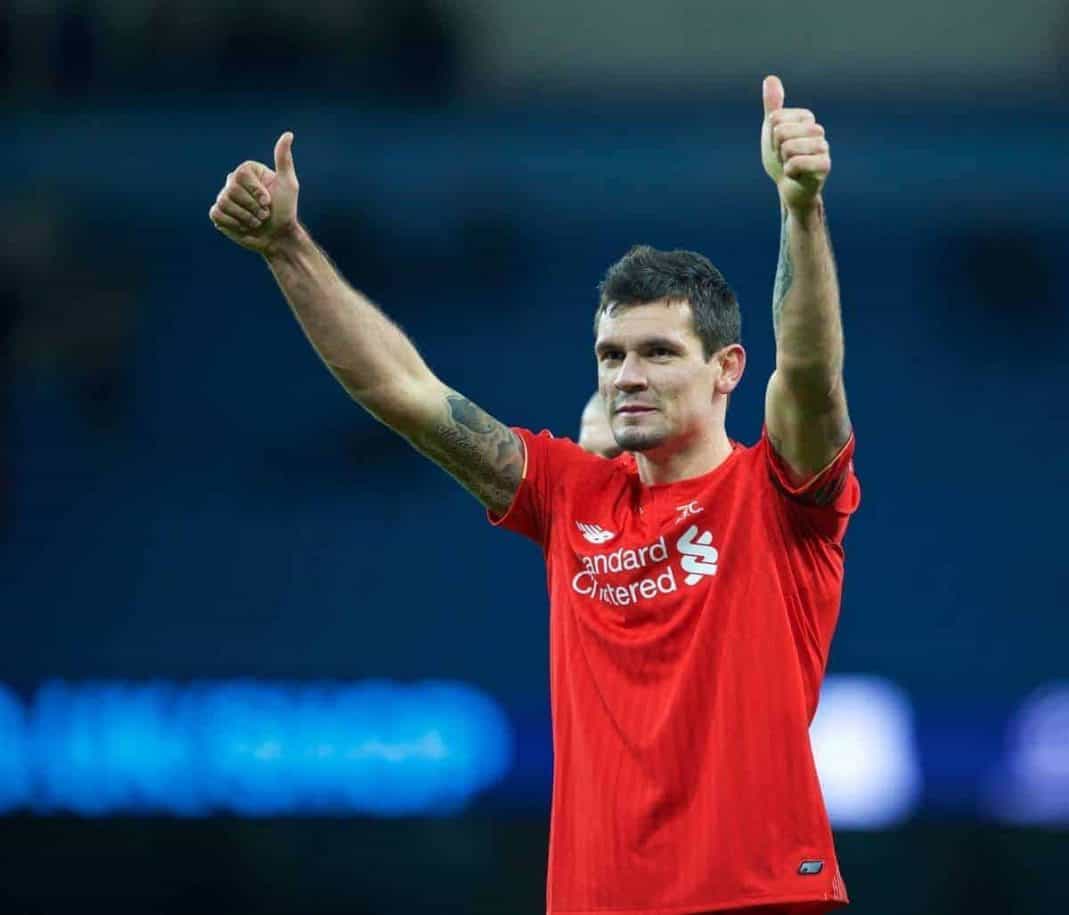 Continuing our reviews of Liverpool’s squad for the 2015/16 season, we focus on Dejan Lovren’s second year at Anfield.

After a nightmare debut campaign on Merseyside, there was an overwhelming feeling of concern as to how Lovren would bounce back for his second year at Anfield.

Positively proved to be the answer, as after a similarly ropey start to his first year, the £20 million man settled to enjoy a much improved season under guidance of Jurgen Klopp. Lovren was under intense scrutiny from the very first day of pre-season, as Rodgers again put his faith in the Croatian as first choice ahead of Mamadou Sakho, despite a disastrous opening year.

After a solid pre-season and early assured showings against Stoke – where he was voted TIA’s Man of the Match – Bournemouth and Arsenal, it appeared Rodgers’ faith was justified and a corner had been turned.

But it proved a false dawn with a horrorshow against West Ham and after another dire display in the 3-1 defeat to Man United it seemed there was no way back.

Lovren’s defending was poor, decision-making was erratic and confidence was shot to pieces – and it became hard for Rodgers to stick by him with his poor displays heavily contributing to Liverpool’s slow start, eventually leading to the Northern Irishman dropping him.

He featured only once more under Rodgers – marking the occasion with a fittingly dreadful performance in the woeful League Cup draw against Carlisle – earning a TIA average rating of just 5.75 under the former boss.

Lovren would have feared for his Anfield future at this point but the departure of the man that signed him proved a blessing in disguise, with Klopp reviving his Reds career.

Lovren missed the opening of Klopp’s reign through injury, but assured early outings and injury to Sakho opened the chance for the much-maligned defender.

A simplified approach to his defending as the covering option alongside Martin Skrtel saw a marked improvement in the Croatian, despite resuming the partnership that had often proved Lovren’s undoing at Anfield.

But the duo turned in solid displays to help claim one of the results of the season at Man City, before keeping a clean sheet against Swansea a week later, which Lovren, despite changing partners, followed up with strong displays in wins over Bordeaux and the 6-1 thrashing of Southampton.

Lovren had taken the chance provided with both hands, earning Klopp’s praise after a distinct improvement:

“I’d heard not the best things about him since but during my time here he’s looked strong and everything is OK.

“He has shown he strong he is and for me I’m not surprised about this. I knew about his quality.”

In fact, such was his performance level, when Sakho returned Lovren was Klopp’s chosen man to partner him in what would become the first-choice pairing.

Klopp made a good call in switching Lovren to a right centre-back role, breaking up the dysfunctional left-side relationship with Alberto Moreno.

Now between Sakho and the defensively stable Nathaniel Clyne, he produced a positive spell of form.

He was much more assured next to Clyne – his composure on and off the ball and decisiveness had vastly improved – showed as helped keep successive clean sheets over Christmas, including in a man-of-the-match display at Sunderland, as he settled into an improving defence.

Two injury spells at the turn of the year derailed building momentum, but Lovren made up for lost time, producing his best form in a Liverpool shirt alongside Sakho on his return.

He not only built on the promising period before injury but also elevated his game another level, clearly benefitting from a consistent partnership and a tighter defensive unit.

Though Sakho led with exemplary performances, Lovren’s form was impressive too. The duo struck up the partnership many had hoped for on domestic and European stage – writing himself into Anfield folklore with his winner against Borussia Dortmund in a signal of his transformation – before bossing at the back in the derby hammering of Everton.

Sakho’s ban saw Lovren’s form dip, but he produced another excellent display against Villarreal – famously delighting Klopp with a crunching challenge on Cedric Bakambu – as the Reds reached the Europa League final, where he signed off with a disappointing display.

Considering the tough first year, Lovren has responded extremely positively to enjoy a much better second season at Anfield – finishing the season with an improved 6.5 rating.

His performances have been much improved since Klopp’s arrival, with him more assured and commanding as a right-sided centre-back, where he enjoyed his best spell in a red shirt to date.

Having previously looked certain to leave, his upturn has likely extended his Anfield stay for at least another year, but he still has areas to work on if he wants to remain part of Klopp’s plans – most notably his positional play and one-against-one defending.

It remains to be seen whether this upturn is enough for Klopp to keep him as a first-choice pick and with the Reds boss set to recruit defensive options – Joel Matip the start of his work – Lovren is likely to drop down the pecking order.

That is not a bad thing with the way Lovren has proved himself an adequate backup, especially when alongside a dominant, imposing defender that Klopp will hopefully bring in.

There is no urgent need to get rid of the 26-year-old, who has earned trust for his improved level of performance, with replacing the ageing Kolo Toure and inadequate Skrtel higher priorities.

Keeping him as a covering option would certainly signal a strengthened back four which Liverpool need.

Regardless of what may transpire, it was a much better year for Lovren who will hope to build on this if handed the chance next season.

Best Moment: Heading the winner at the Kop end against Dortmund!