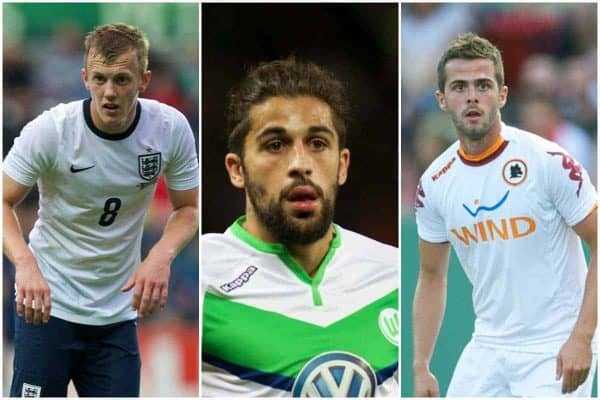 Liverpool have lacked quality from set-pieces since the departures of Steven Gerrard and Luis Suarez two years ago, could the Reds add a player capable of fixing that void?

The Reds have seemingly had set-piece issues for much of the Premier League era. Or at least that’s how it feels.

A vulnerability at defending corners has been a much discussed Achilles heel in recent times, while a lack of threat at the other end of the pitch has also been increasingly evident.

In terms of the actual delivery, Liverpool have flattered to deceive far too often.

Steven Gerrard was largely excellent, especially as he got older, and his quality during the 2013/14 season was out of this world, while Luis Suarez had the ability to curl free-kicks into the corner with ease that same season.

Gary McAllister and Danny Murphy were reliable set-piece takers in the early 2000s, John Arne Riise added some blockbusters around the same time, while Robbie Fowler and John Barnes offered the highlights in the 90s. More recently, it’s an area where the Reds have been lacking.

Last season it was particularly poor, with a constant failure to clear the front man from corners and free-kicks out wide, and just one goal from a direct free-kick.

That was James Milner‘s effort away to Aston Villa, and even that was an intended cross that evaded everyone and ended up in the net.

Jurgen Klopp could do with adding some set-piece quality to his squad, so here are five potentially realistic, logical options who could provide a fix.

Seen as one of Europe’s most exciting young left-backs, Ricardo Rodriguez has become a key man for Wolfsburg since joining from FC Zurich in 2012.

Blessed with a wand of a left foot, the 23-year-old produced three assists from set-pieces last season, and another three from crosses.

He has enjoyed a combined 28 set-piece goals and assists during his time in the Bundesliga, which for a full-back, is highly impressive.

With left-back an area Liverpool are looking to strengthen in this summer, signing Rodriguez could prove to be a match made in heaven.

Arsenal appear to be the front-runners for his signature though, while with Ben Chilwell and Jonas Hector the Reds’ top transfer targets in that area.

Seen as one of Serie A’s most talented midfielders, Miralem Pjanic is a wonderful footballer, with Liverpool linked with him in the past.

The Bosnian oozes class from his playmaker role at the heart of Roma’s midfield, and he is renowned for his exceptional set-piece delivery.

The 26-year-old scored an impressive six free-kicks in 2015/16, as well as a couple of penalties, in the highest-scoring (12) season of his career to date.

Not only that, but he also made four goals for teammates from dead-ball situations – three from free-kicks and one from a corner.

Liverpool are crying out for a midfield maestro who can dictate the pace of a game, and if Klopp fails in his efforts to sign primary target Mahmoud Dahoud, Pjanic would be an ideal signing.

The Reds would certainly look so much more of a threat from set-pieces.

A move to Juventus does appear to be nearing its conclusion, however, so a move for Pjanic may end up being nothing more than a pipe dream.

To outshine Lionel Messi and Cristiano Ronaldo is both extremely rare and an impressive feat for any attack-minded footballer.

Despite this generation’s two greatest players being superb from set-pieces in their own right, Hakan Calhanoglu is widely regarded as the world’s best in that area currently.

The Turkey and Bayer Leverkusen attacking midfielder is outrageously talented from direct free-kicks, with the 22-year-old threatening to reach the incredible levels of former Lyon set-piece genius Juninho.

Like Pjanic last season, Calhanoglu scored a remarkable six free-kicks in 2014/15 – he only actually scored one in 2015/16 – and he is at an age where he should only improve further.

Liverpool are fairly well-covered in attacking midfield areas, assuming Philippe Coutinho doesn’t up ship and leave this summer, but Calhanoglu would still add undoubted quality, and an ability to cut in from the left onto his deadly right foot.

A few years back, James Ward-Prowse was being touted as one of English football’s most exciting talents, and he made his debut for Southampton at the age of just 16.

Now 21, his Saints career has stalled a little, often having to settle for a place on the substitutes’ bench, behind more established teammates.

One thing that is for sure is that Ward-Prowse has fantastic set-piece delivery – not dissimilar to David Beckham in his prime, in terms of style.

The pace and whip that he gets on the ball is undefendable at times, and unlike many current players, he also has great consistency with his delivery.

He scored one free-kick last season – a sumptuous effort against West Brom – and he also laid-on three assists from dead-ball areas.

Ward-Prowse has just signed a new deal at Southampton, and there are question marks about his overall ability, but given Klopp’s preference for improving young players, Liverpool could certainly make worse signings this summer.

I can hear you all screaming at your laptops and phone from here!

Of course, the chances of Mario Balotelli returning to Liverpool from his loan spell at AC Milan and being kept on by Klopp are slim, but he does at least know how to take a free-kick.

Whether it’s delivery from out wide or free-kicks from 30 yards out, the 25-year-old can be a menace from these situations, when on top of his game.

He has scored 29 set-piece goals in the last seven seasons – admittedly 19 have been penalties, but he’s still among the best.

An impressive set-piece record should not be the be all and end all – realistically there is no chance of him remaining a Liverpool player – but he would at least cost nothing.