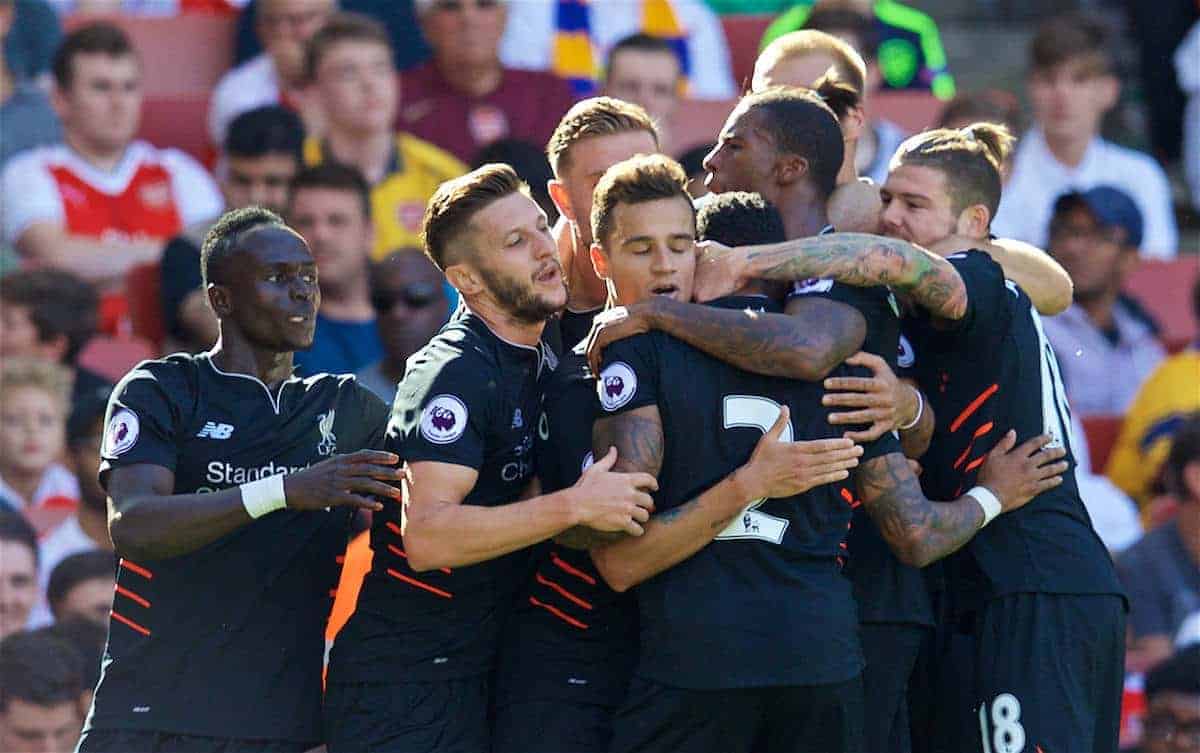 Liverpool’s thrilling 4-3 win over Arsenal was a great way to start the 2016/17 campaign, but there is so much more to come under Jurgen Klopp.

Even by Liverpool’s standards, their Emirates Stadium triumph was dramatic.

There were plenty of imperfections about Jurgen Klopp‘s side in north London, but their dazzling attacking play outweighed a continued sluggishness in defence.

Much was made of Arsenal‘s weakened starting lineup, with Calum Chambers and Rob Holding paired at centre-back—but what about Liverpool?

They went to one of the toughest grounds in the country with a relatively second-string team of their own, and passed with flying colours.

A fair number of the Reds who started proceedings were not in supporters’ best possible XIs in the summer, so it is very exciting when contemplating what Klopp’s strongest lineup could be capable of. Football is very subjective, and fans will understandably have their own favourite players, but there is a strong argument to say that Liverpool only had one first-choice starter in their back line on Sunday.

The general consensus in the lead up to the new campaign was that Loris Karius was ahead of Simon Mignolet in the goalkeepers’ pecking order, prior to breaking his hand late last month.

Mignolet did little wrong against Arsenal—some, perhaps unfairly, feel he should have done better with Alex Oxlade-Chamberlain‘s deflected goal—but Karius feels like the solution moving forward.

The German is yet to play a competitive game for the Reds, so it would be wrong to get too carried away, but he is more suited to Klopp’s style than Mignolet.

James Milner was favourite to start at left-back prior to injury, and is expected to replace the under-fire Alberto Moreno against Burnley on Saturday.

At centre-back, the injured duo of Joel Matip and Mamadou Sakho may well be the first-choice pairing, once fully fit.

Ragnar Klavan has come in and done well so far, while Dejan Lovren remains much improved, but neither possess the all-round class that Matip and Sakho do.

Both will have to prove themselves upon their return, though, with Klopp never being one to pick players on reputation. Missing from the start on Sunday was Emre Can, who was deemed not quite fit enough to feature for all 90 minutes against the Gunners.

Although only 22, the German has already matured into Liverpool’s most influential midfielder, and he is now a shoo-in to be one of the first names on Klopp’s team-sheet.

Can not starting at the weekend had the potential to throw a real spanner in the works, but the rest of the midfield really shone in the second half, following a poor start.

Jordan Henderson was very good at times, and showed more leadership than we have seen in the past, while Georginio Wijnaldum grew into the game more than most.

Adam Lallana recovered from his error that played a part in Theo Walcott’s goal, and was superb after the break. He took his goal brilliantly, and looks like a player with more substance to his game now.

It is testament to the squad Klopp has built that Can did not need to be risked—last season he was rushed back for the Europa League semi-finals, due to a lack of depth.

The fact that Liverpool went to the home of one of their biggest rivals and scored four goals is impressive in itself, but to do it without Daniel Sturridge and Divock Origi is a real eye-opener.

Admittedly, the attacking unit of Philippe Coutinho, Sadio Mane and Roberto Firmino failed to click in the opening 45 minutes, but after the interval they were mesmerising at times.

They blew Arsenal away in a 15-minute spell in which the Reds scored three times, with some of the passing, movement and trickery out of this world.

Despite this, Sturridge and Origi are both more than worthy of featuring regularly this season, and they no doubt will.

Firmino was preferred up front, but is not a natural striker, and Origi’s ability to stretch the opposition defence and bully them with his physicality will often be the better option for Liverpool this season and beyond.

Sturridge is being carefully eased back in, in order to avoid further injuries, and we all know what a special footballer the 26-year-old is.

When in full flow, Sergio Aguero is the only superior striker in the Premier League, and he makes the Reds look a completely different animal.

To be in a situation where two of Firmino, Origi and Sturridge may be sat on the bench perfectly highlights the strength of this Liverpool squad. An opening victory always give you an extra spring in your step, but to win in the manner Liverpool did against Arsenal felt extra special.

It wasn’t perfect, by any means, and there is plenty to work on, but Klopp is continuing to make the Reds more of a force by the week.

The 49-year-old fielded a team that didn’t include Karius, Matip, Sakho, Milner, Can, Sturridge or Origi, all of whom are likely to be regular first-teamers in the months ahead.

In the past, Liverpool could never have won at Arsenal without so many key men, regardless of the Gunners’ own personnel issues.

Not everyone would start with those mentioned above, which is perfectly understandable, but isn’t it great to have such options available now?

Calls for a new left-back and defensive midfielder will not go away until the end of the transfer window, but there is so much to be positive about.

Sunday was just a sign of things to come, and as 1970s rock group Bachman-Turner Overdrive once sang: You Ain’t Seen Nothing Yet.