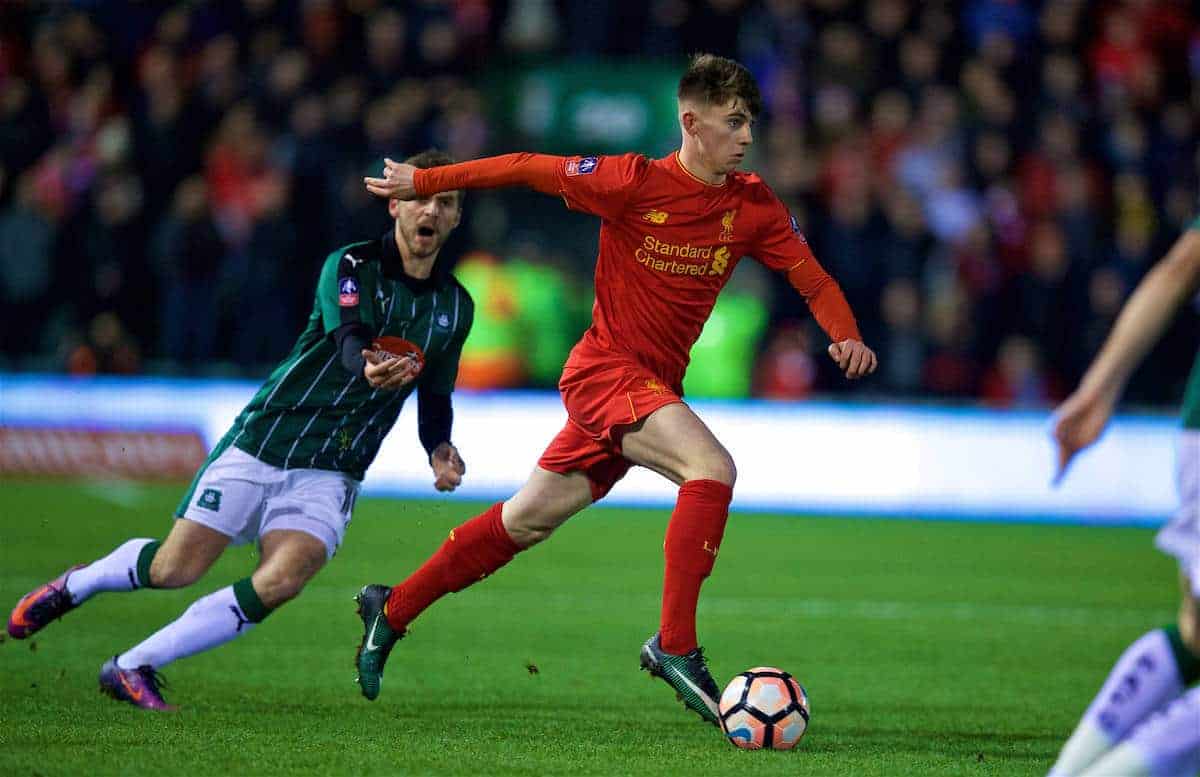 Liverpool scraped past Plymouth Argyle in the FA Cup third round replay on Wednesday night, with Lucas Levia’s header proving the only goal of the tie.

There were a number of fresh faces in the Liverpool squad as Harry Wilson, Jordan Williams, Paulo Alves and Connor Randall were all named on the bench.

Daniel Sturridge, Divock Origi and Philippe Coutinho started for the Reds who made two changes to the side from the 0-0 draw at Anfield.

Unsurprisingly, Liverpool dominated the early stages but the opening goal came from the most unlikeliest source as it was centre-back Lucas who netted his first goal in seven years.

There wasn’t too much to get excited about after that but Wilson came on as a substitute in the second half to make his debut for the club.

Plymouth almost scored an incredible equaliser with 20 minutes left to play but it smashed off the post before Liverpool had a chance to double their lead with a penalty in the 86th minute.

However, Origi fired straight into the hands of the keeper which summed up a tough night for the striker and Liverpool held on to win 1-0.

None of Jurgen Klopp's Liverpool senior squad were at the club the last time Lucas Leiva scored. #LFC pic.twitter.com/tf3iwgKYQA

I hope Lucas' goal motivates him to stay at Liverpool, at least until June. He is a great character to have in and around the squad. #LFC

Fans were delighted to see Wilson make his debut…

All the best brother @harrywilson_ made up for you???

Sturridge and Origi’s performances were not impressive…

Sturridge has been terrible tonight. Huge fan, but doing his future chances no good whatsoever.

And Origi’s penalty was also a flop which infuriated fans…

Wow! That penalty was horrendous!!

Compounds Divock Origi's awful night. Scored a handful of goals, but he's not been impressive at all this season.

Before the game I thought Origi was at best to average and he's not exactly convinced me otherwise tonight! ?

FT 0-1. Made hard work of it but the lads got the job done in the end. Credit to Plymouth, they kept us honest.

Not pretty but job done! #LFC.

That'll do. Some good first-team football for the kids, and the "first team" rested ahead of Swansea on Saturday! In the next round. ?

Job done. The least said about that game the better. Awful

Sighs of relief all round! Well played Plymouth, just one goal conceded in 180 minutes against one of the Premier League's biggest scorers.

It's great when Liverpool give youngster a go. But it's still Liverpool. You have to play with heart and guts. Thank god for Harry (& Lucas)

Through to face Wolves, that's what matters. #LFC

We made that far tougher than it should have been, but at least we're through. #LFC #YNWA #PLYLIV #Lucas