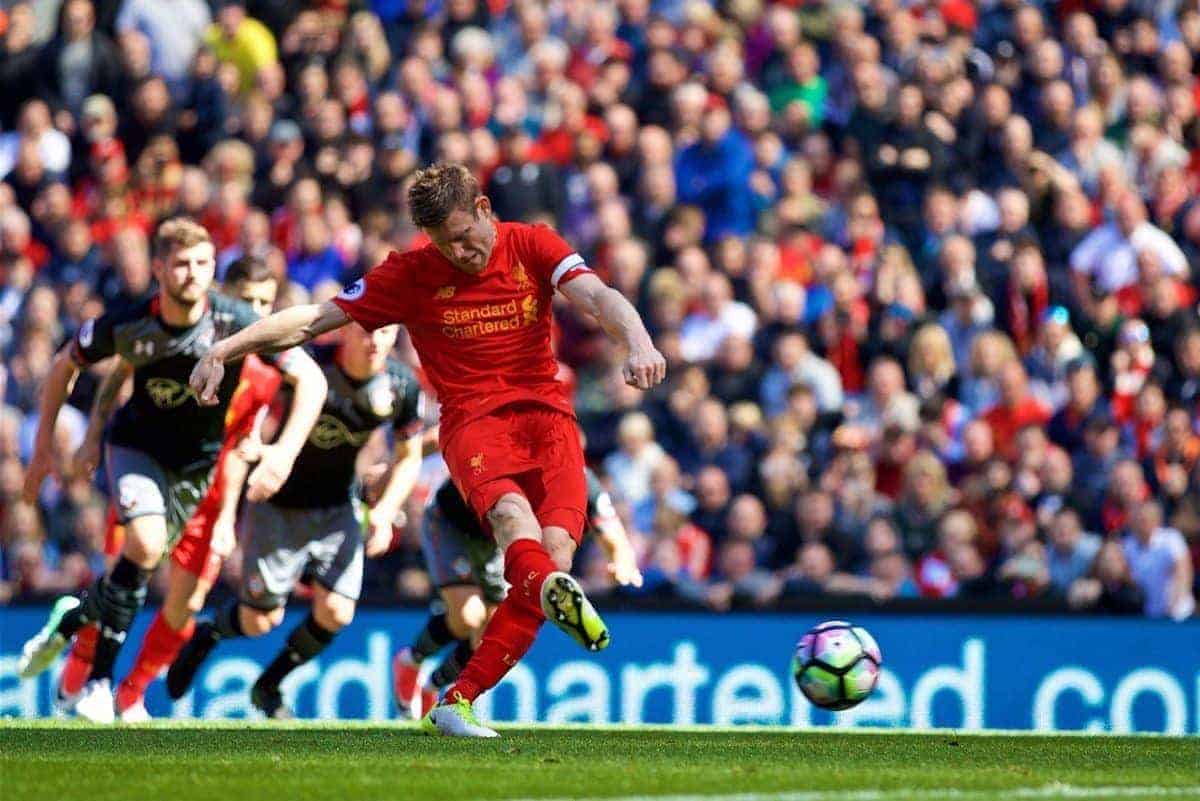 Liverpool vice-captain James Milner admits his team will feel sick if they let Champions League qualification slip through their fingers at the last minute.

The Reds have spent only two weeks outside the top four since September, but Sunday’s goalless draw at home to Southampton threatened to undermine that until sixth-placed Arsenal did them a favour by beating fifth-spotted Manchester United.

That result at the Emirates Stadium meant Liverpool’s fate was back in their own hands, despite the chasing teams’ matches in hand, and two more wins will secure a return to the Champions League next season.

However, with a trip to West Ham, a team they have not beaten in their last five meetings, up next followed by hosting Middlesbrough at Anfield – where the Reds have taken two points from the last three matches – nothing is guaranteed.

Asked how being pipped at the post would feel, Milner, whose first penalty miss in more than seven years cost Liverpool victory against Saints, said: “Sick.

“This is a team and a club that needs to be in the Champions League.

“We will be in Europe, but the Champions League is where everyone wants to play.

“Hopefully we will get a bit of luck and finish the job. We have made improvements this year and we know where we need to improve again.

“We have shown on any one day we can beat anyone, so if we could get in the Champions League we know we could be a match for anyone.

“We have got to do it consistently, but I don’t think we have been as up and down as last year. “In the games we haven’t got the points we wanted, we have dominated, but we’ve dropped points where we shouldn’t have done.

“We do that job better and we are fighting for the title, never mind fighting to get into the top four.

“That is disappointing and we know it is an area we need to improve.

“We have got to win the last two and see where that takes us.”

Liverpool’s current tally of 70 points has only been reached by the club nine times since their last title win in 1990, and in the 15 years since fourth place earned a Champions League place only two teams with that amount have missed out.

This season is likely to make it three with Arsenal, on 63, playing Southampton and Stoke away before Liverpool head to east London on Sunday.

Southampton, like so many other visitors to Anfield, made themselves difficult to break down and again it proved beyond the means of Jurgen Klopp‘s side, who are missing key men in forward Sadio Mane and captain Jordan Henderson through injury.

Despite the frustration, Milner insists there has not been – and will not be – any nerves.

“In terms of myself, I don’t really notice it and I don’t think (nerves) are in the dressing room either,” he added.

“We are a young squad, yes, but I feel we are still trying to play the right way.

“I don’t see us lumping the ball forward and panicking in the last 15 minutes of games.

“I don’t think we over-committed (against Southampton). We stuck to the task well, we committed a good amount of numbers forward without stretching ourselves and leaving the boys one on one at the back.

“I think it was a mature performance and if nerves were affecting us you would have seen us lumping balls forward. I don’t think that has happened.

“Against the top teams, our record is very good, but against the teams that come to sit back and play on the break and look to get something from a set-piece, we need to improve.

“There are not many things wrong. We can certainly improve on it and if we do that we will be in the reckoning.”