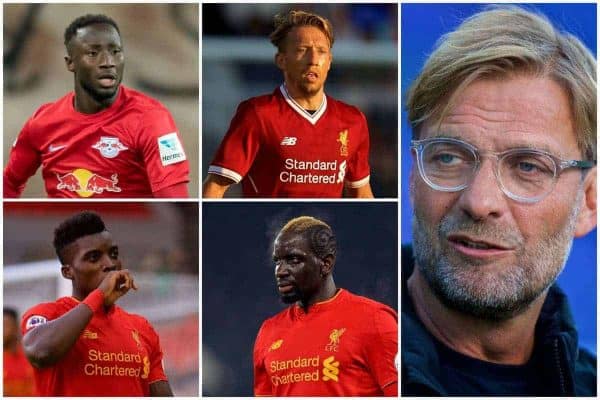 While Liverpool prepare for their second pre-season friendly on Friday, we round up the latest from the rumour mill as the transfer window rumbles on.

The Reds take on Wigan Athletic at the DW Stadium as they look to continue their progress throughout pre-season, following Wednesday’s 4-0 win at Tranmere Rovers.

Jurgen Klopp‘s focus will be on how his side performs ahead of their trip to Hong Kong, but what about sporting director Michael Edwards?

Here we round up the latest Liverpool transfer news and rumours on Friday.

The Reds have submitted their first official offer for the 22-year-old, worth £57 million, though this was rejected out of hand by the Bundesliga side.

However, according to Goal’s Melissa Reddy, fractures are appearing in Leipzig’s hierarchy, as while sporting director Ralf Rangnick is determined to keep Keita, the club are considering a sale.

Sources within Leipzig have suggested sanctioning Keita’s departure would be a “smart business decision,” with Liverpool seemingly prepared to meet their £70 million valuation.

Keita is set for further talks with Leipzig this week in order to reiterate his desire to leave.

Reports in Italy this week had suggested Lazio were considering a move for Lucas Leiva as a replacement for Lucas Biglia, who is bound for AC Milan.

Now the Guardian are among those to reveal on Friday that the Serie A side have offered £5 million for the Brazilian, who marked a decade with Liverpool this summer.

Klopp is believed to be willing to part ways with the 30-year-old ahead of 2017/18, with Sky Sports claiming the fee has been agreed.

Lucas is far down the pecking order in both defence and midfield, and a switch to Rome could improve his prospects of regular first-team football.

He is deeply rooted in Merseyside, however, and it may be that a return to his homeland would be more preferable, but the ball is now in Lucas’ court as he considers an exit.

Have Palace Signed Their Sakho Alternative?

The Frenchman was reported to have already agreed personal terms with the Eagles, but the Reds’ valuation of £30 million was said to be putting them off making a bid.

Palace manager Frank de Boer had been credited with an interest in Ajax duo Joel Veltman and Kenny Tete, but the latter has since joined Ligue 1 side Lyon.

De Boer has turned his attention to another Dutchman, however, with Sky Sports reporting that Porto centre-back Bruno Martins Indi is heading to Selhurst Park to undergo a medical.

Martins Indi spent last season on loan with Stoke City, and Palace have thwarted the Potters to secure a deal, likely leaving Sakho in the wilderness.

On Wednesday, Liverpool winger Sheyi Ojo was reported to be edging closer to a loan move to Championship hopefuls Middlesbrough.

Klopp opting to send the 20-year-old to Riverside for the season would be a blow to Newcastle United manager Rafa Benitez, who is vying with Garry Monk to sign the youngster.

However, according to the Newcastle Chronicle, the Magpies “have not thrown in the towel” in their pursuit of Ojo.

But this does come at the end of a report that Newcastle are pushing forward with a deal to sign Norwich City winger Jacob Murphy, having already made an £8 million bid for the England U21 international.

Given the Canaries value Murphy at £16 million, Ojo could serve as a cut-price alternative.

After an impressive showing against Tranmere, though, he could still be an option for Klopp.