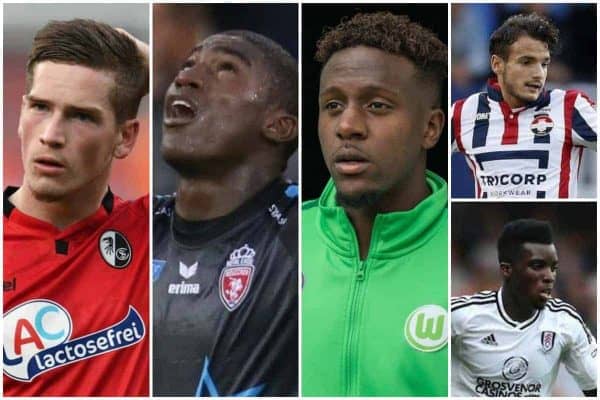 It was a great week for Liverpool’s loanees as every Red enjoyed match action, with Divock Origi and Taiwo Awoniyi both finding the net.

Origi grabbed his first Bundesliga goal to earn Wolfsburg a point with a 1-1 draw against Werder Bremen in midweek.

The Belgian led the line on his own in Martin Schmidt’s first game in charge, and opened the scoring with the sort of poacher’s finish Liverpool lacked in the League Cup exit at Leicester the same night.

As play developed down the left, Origi made a darting run into the heart of the box and slid in to convert a great ball across from six yards out – as you can see, here.

The goal put Wolfsburg 1-0 up, but most importantly it came in a positive overall display from Origi, who was a threat all night and rightly kept his place for Friday’s clash with Bayern Munich.

It was a very different evening at the Allianz Arena for the Belgian, who had a thankless task playing up top on his own for 85 minutes of a credible 2-2 draw.

Origi fed off scraps as Bayern dominated throughout, but he produced some tidy hold-up play and worked tirelessly before being withdrawn five minutes from time.

Awoniyi was among the goals again at Royal Excel Mouscron, registering on the score-sheet in the first of two outings this week.

The Nigerian netted his third for the club in a 3-1 cup win over Tubize, scoring the opener on 27 minutes as he was in the right place at the right time to bundle home a cross – as seen here.

Awoniyi was withdrawn after an hour with his work done for the night, but his impressive form earned a start for Saturday’s clash with Eupen, which Mouscron won 3-2.

Awoniyi didn’t manage to notch a second goal in as many games but he did play 88 minutes and still made a positive contribution.

Pedro Chirivella was another star performer, following a positive display last week with an influential showing in Willem II’s 4-2 cup win over Apeldoorn – in which he posted an assist.

Continuing in a box-to-box role, Chirivella instigated his side’s second goal – delivering a delightful cross-field pass which Konstantinos Tsimikas controlled superbly and finished to make it 2-0.

Good result on Wednesday and on to the next round of the Cup. Gutted to miss tomorrow's game vs Heerenveen, all the best to the lads?? ??

Frustratingly, the Spaniard was denied the chance to continue his positive upturn against Herenveen on Saturday due to suspension.

Back in the Bundesliga, Ryan Kent featured twice for Freiburg, enjoying two substitute appearances as he continues to find his feet in Germany.

The first of those saw Kent post a positive 15-minute cameo in a 1-1 draw with Hannover, the winger making his mark on proceedings despite little time by forcing the corner from which his team equalised.

That bright impact earned Kent an extended half-hour run-out against Werder Bremen on Saturday, and the 20-year-old again was again in positive form – offering a pacey outlet and goal threat from wide.

In Cyrpus, Allan Rodrigues made his Appollon Limassol debut last Monday, playing 80 minutes of a 4-2 win over Ermis in centre-midfield where he produced a solid first outing before being subbed at 2-2.

That was the Brazilian’s only action, with injury ruling him out of Saturday’s Limassol derby with AEL which ended 1-1.

Across the pond in MLS, Brooks Lennon returned to Real Salt Lake’s starting XI against Seattle Sounders and didn’t let his side down as he helped earn a 2-0 win.

The youngster enjoyed a rare outing in his natural central striking position, but overall he was in quiet form.

It was a similarly action-packed – if less productive – week for the Reds on home soil.

In the Scottish Premier League, Connor Randall made a welcome return from injury to play all 90 minutes of Hearts’ 1-1 draw at Partick Thistle.

Randall’s comeback came in the midfield role predominantly played so far, and he showed positive progress with attacking duties in particular – coming close to scoring with a long-range strike.

In the Championship, Sheyi Ojo played a third successive full game for Fulham from the right of a three-man attacking midfield in a 1-1 draw with Middlesbrough.

The youngster enjoyed some bright moments – showing good skill, directness and delivery in one-against-one situations – but overall it was one of his quieter outings for the Cottagers so far.

Jordan Williams continues to impress at Rochdale, with the midfielder in fine form again this week for the League One side.

Williams helped Dale seal an emphatic 4-0 win at rivals Bury in the Football League trophy in midweek, producing a dominant 73-minute display in the middle of the park.

And he impressed again on Saturday by producing another polished showing in a 3-0 win over Gillingham – doing a fine job protecting his back-four to help post a second straight clean sheet.

Shamal George’s loan at Carlisle is developing into a promising spell, with the youngster enjoying a third straight outing as he begins to make the No.1 shirt his own at the League Two side.

And George has taken no time in repaying manager Keith Curle’s faith, following up his surprise assist last week with a second clean sheet of the season as Carlisle thrashed Crewe 5-0 on Saturday.

Finally, Toni Gomes was rewarded for his positive impact last week with a start for Forest Green’s derby clash with Swindon – which ended in a 2-0 defeat.

The youngster started on the left of a three-man front line, where he competed well in a physical contest before being substituted on 66 minutes.