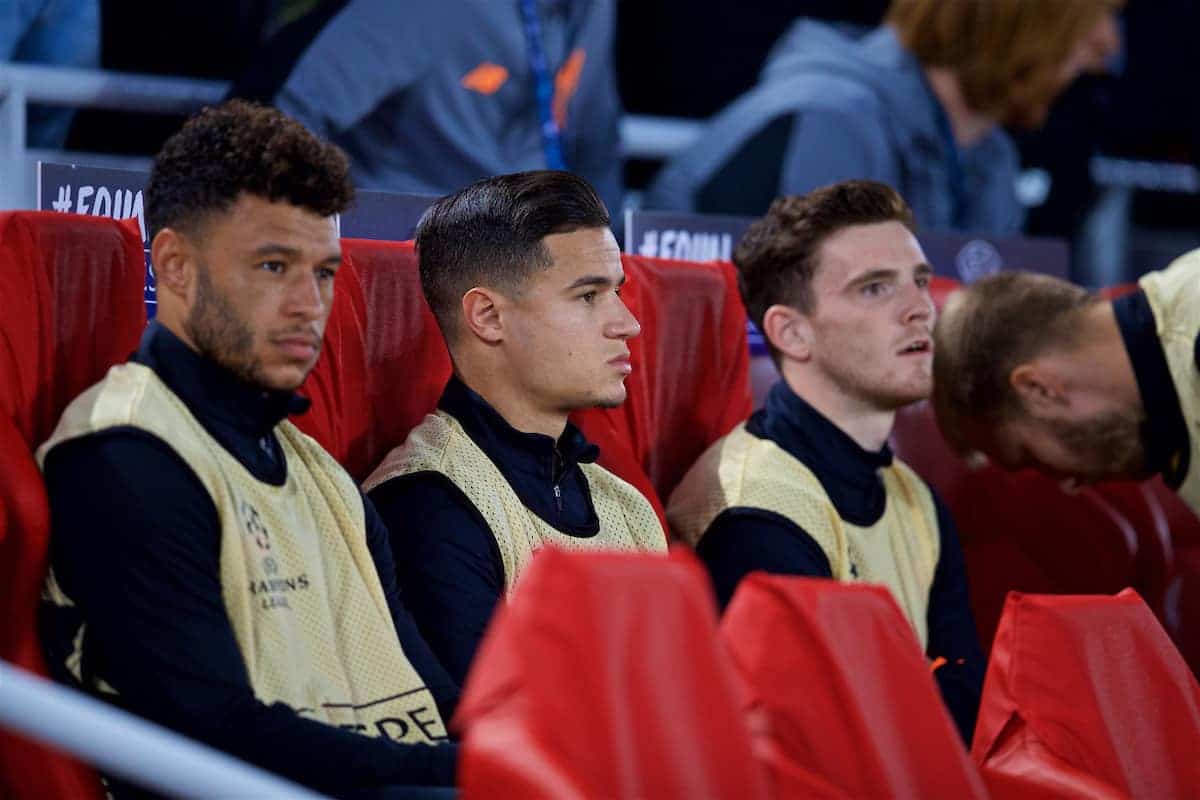 Jurgen Klopp is set to rotate his Liverpool side against Burnley, and the boss has plenty of quality to introduce for a potentially exciting attacking lineup.

The Reds look to end what has been a frustrating week on a positive note by getting the Premier League campaign back on track against Sean Dyche’s side.

A typically tough game awaits against the Clarets, who have already won at Chelsea and drawn at Tottenham this season, and will provide a big test for Klopp’s men in breaking a stubborn, deep-sitting defence.

Klopp has suggested he will rotate to ensure his team are fresh “in mind and in legs” for the challenge.

But it’s one the Reds have to face without Sadio Mane, who serves the first of his three-game ban.

Liverpool’s XI vs. the Clarets

An intense period continues for the Reds with a third game this week, and Klopp is set to make changes—with at least one enforced due to Mane’s absence.

A handful of alterations to inject freshness into the XI are likely, rather than wholesale switches which will surely come at Leicester in the League Cup on Tuesday.

The big question is of course how Klopp will navigate Mane’s absence, and the boss has real quality at his disposal to ensure his team get by smoothly without the key attacker.

One way—perhaps the most logical, too—could see Coutinho enter into his regular role to the left of Roberto Firmino, with Mohamed Salah providing the pacy outlet on the right.

Klopp is also likely to refresh his midfield unit, having named an unchanged central three for the last two games.

Milner and Oxlade-Chamberlain present the go-to options, and in a game the Reds will be required to do the pushing, the latter should get the nod with his athleticism and natural attacking intent needed.

Further tweaks could also come in defence, and Klopp could make three changes again, as done so against Sevilla.

Mignolet will return in one of those, while the boss could continue his policy of ensuring sharpness at full-back by reintroducing Alexander-Arnold and Robertson for Gomez and Alberto Moreno.

A lineup boasting five changes, but also plenty of attacking flexibility, fluidity and all-round quality, would look like this at Anfield: Saturday’s clash is likely to be one that turns into ‘attack vs. defence’, and Klopp could field a more adventurous side to ensure his team find a way through.

Indeed, the Reds leader could deploy a lineup boasting extra goal threat and potentially even greater creativity at Anfield.

In this, the predatory goalscoring instincts of Sturridge would be introduced, deploying the incoming striker centrally with Firmino and Salah providing support from the left and right respectively.

This would allow Coutinho to operate away from what will be a congested final third, to offer creativity and ammunition to a lethal front three from a deeper role alongside Jordan Henderson and Emre Can.

With Mignolet, Alexander-Arnold and Robertson also coming in, the Reds would line up like this: Liverpool certainly haven’t had things all their own way in recent games, but Klopp’s side must retain confidence to bounce back to winning ways and ensure no points are carelessly dropped at Anfield.