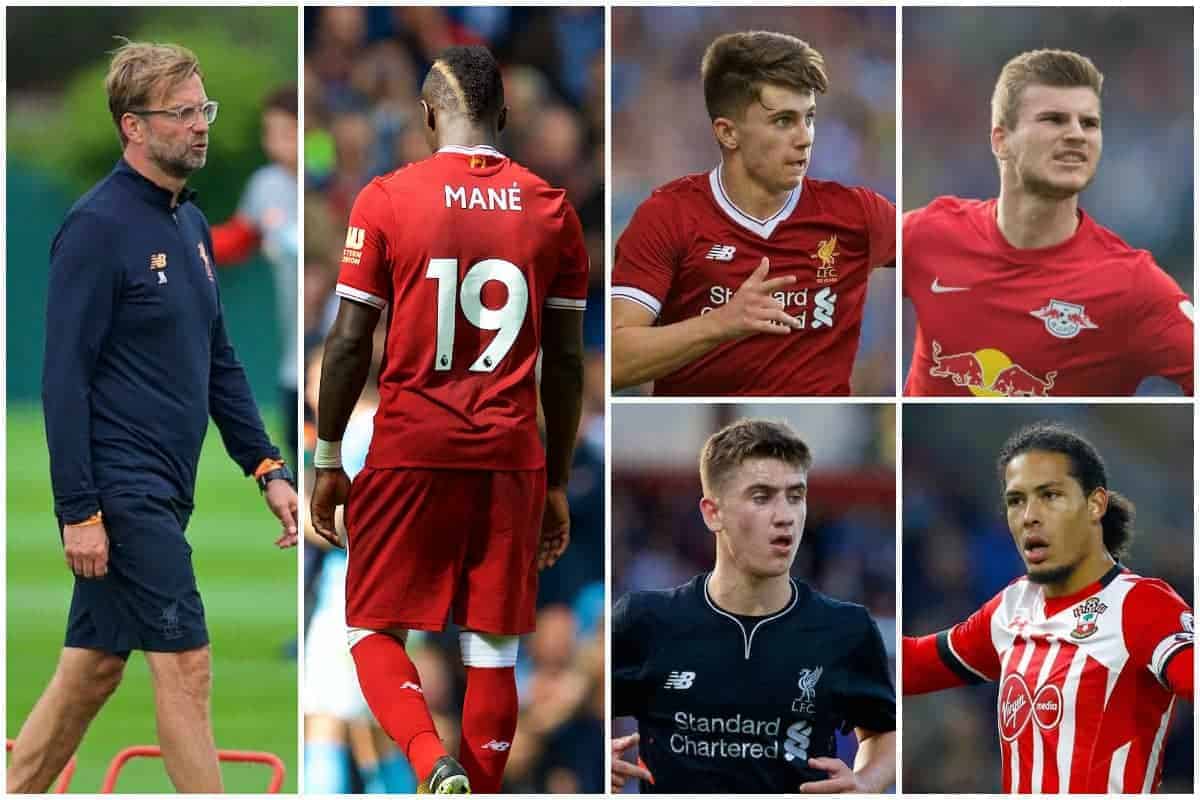 We round up the latest Liverpool news and rumours on Tuesday, as Jurgen Klopp‘s side prepare for their Champions League return against Sevilla.

The Reds take on Eduardo Berizzo’s side at Anfield on Wednesday night, kicking off their European campaign in search of a morale-boosting win.

Since Saturday’s 5-0 loss at Man City, Klopp will have been looking to restore confidence to his squad, while Tuesday has brought change both on and off the field.

Here’s the latest from Merseyside, ahead of Liverpool’s comeback among Europe’s elite. Ahead of Wednesday night’s Group E clash, Klopp oversaw training at Melwood on Tuesday afternoon, with Mohamed Salah not involved due to illness.

Philippe Coutinho, Sadio Mane and Daniel Sturridge were among those to feature, however, but Ben Woodburn also missed out.

Klopp is set to hold his pre-match press conference at Anfield at 7.20pm, with full coverage and video on This is Anfield on Tuesday evening.

Berizzo’s briefing will be held at 6.30pm, with Sevilla continuing preparations at Anfield.

With Sadio Mane sent off for a high challenge on City goalkeeper Ederson, Liverpool appealed to the Football Association to overturn his three-game ban.

But his initial punishment has been upheld, ensuring the winger misses Saturday’s clash with Burnley at Anfield, as well as trips to take on Leicester City in the League Cup and the Premier League.

The 25-year-old is available against Sevilla, however, with his suspension not applicable for European games. But after departing South America in July, he is now set to rejoin the Reds in a new role in the academy, as Head of Coaching for the Foundation Phase.

“Skill development is an area that I am hugely passionate about and working with the youngest players gives you so much joy on a daily basis,” he said on Tuesday.

“The academy is a family and it feels great to be going ‘home’ to work alongside both excellent people and coaches.”

With Liverpool returning to the Champions League, they have also sealed their place in the UEFA Youth League, with Steven Gerrard taking charge of the U19s group.

And the Reds legend has named a 40-man squad for the continental tournament—including Ben Woodburn, who will be considered for both the academy and the first team this season.

The likes of Kamil Grabara, Conor Masterson and Rhian Brewster are also involved, with their first outing coming against Sevilla at Prenton Park on Wednesday evening. After taking on Sevilla, the Reds welcome Burnley to Anfield on Saturday for their fifth Premier League clash of the season.

And Wiltshire-based referee Roger East will take charge, officiating a Liverpool game for the first time since the 3-1 loss away to Swansea City in 2015/16, which saw him send off Brad Smith.

Jonathan Moss, who presided over Sadio Mane‘s controversial dismissal in Saturday’s loss to City, has been appointed referee for Huddersfield Town vs. Leicester City. A broken hand saw Cameron Brannagan’s chances of sealing a move away from Merseyside curtailed in the summer, with the midfielder remaining with the Reds until at least January.

After making his return to action for the U23s in their 1-0 win at home to Man City on Sunday afternoon, the 21-year-old played the full 90 minutes in a U19s friendly against Qatar on Tuesday.

Okera Simmonds and Glen McAuley, who are both part of Gerrard’s UEFA Youth League squad, scored in a 2-2 draw at Kirkby.

Liverpool secured an excellent deal with Bundesliga side RB Leipzig last month, with Naby Keita lined up to make a £55 million move next summer.

They are also said to be interested in Keita’s team-mate, Timo Werner, but according to German outlet Sport 1, Real Madrid have joined the race to sign the striker.

But they also quote Leipzig CEO Oliver Mintzlaff as saying he is “relaxed” over the 21-year-old’s future. Loris Karius is expected to line up between the sticks for Liverpool on Wednesday night, but it could have been another young German if things had gone differently many years ago.

Speaking to the Independent, FC Koln goalkeeper Timo Horn revealed he turned down a move to Anfield when he was “15 or 16.”

“I didn’t go there because I felt the goalkeeping schooling in Germany was much better and I had enough examples, for instance Ron-Robert Zieler who came back after a year [at Man United],” he said.

“And that’s why I stayed in Koln. It definitely wasn’t the wrong decision!”

Finally, away from Merseyside, summer target Virgil van Dijk has made his first appearance for Southampton since handing in a transfer request last month.

Unfortunately for the Dutchman, it came in a 4-0 loss to the Aston Villa U23s, playing the full 90 minutes in Walsall.

Given he was desperate to seal a move to Liverpool in the summer transfer window, it could be that the centre-back’s mind was elsewhere…