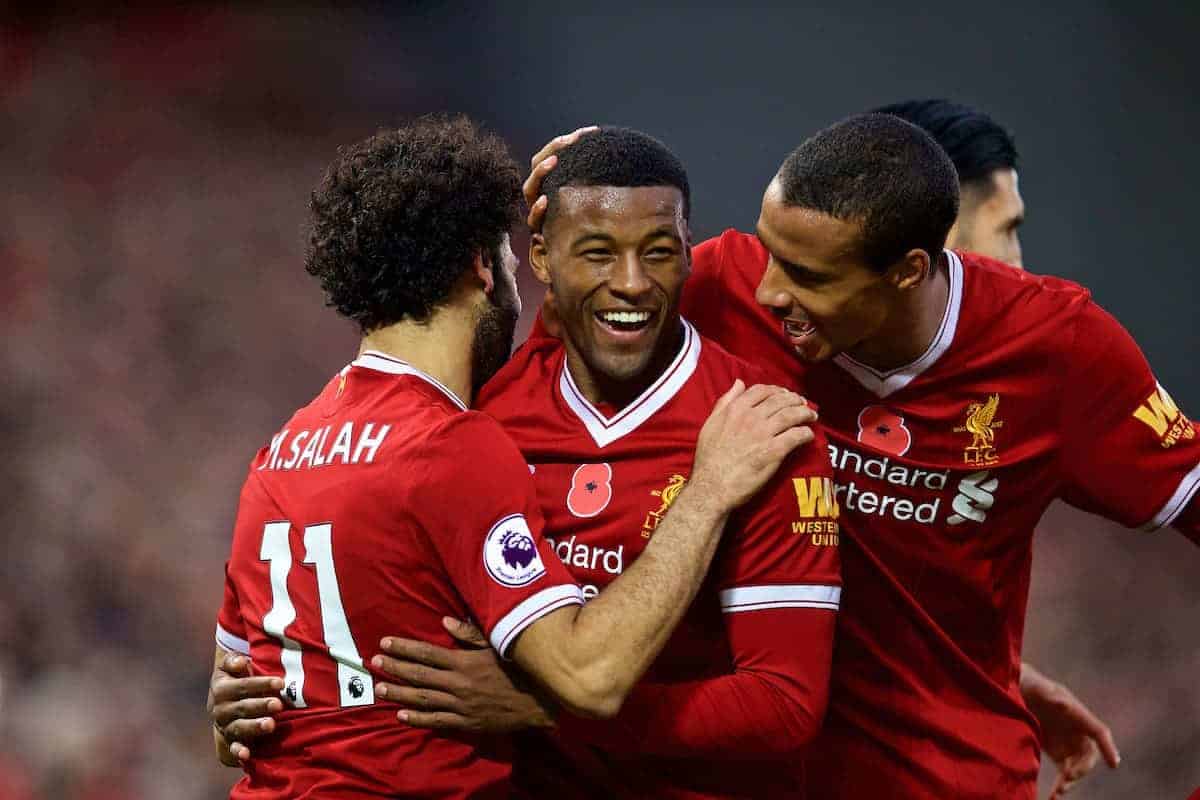 Liverpool returned to form with a hard-fought 3-0 victory at home to Huddersfield Town, as they dominated David Wagner’s newly promoted side.

Jurgen Klopp offered Mignolet a staunch showing of support following his error-ridden display away to Tottenham, saying “I don’t think for a second about changing this position.”

The pressure was certainly on the Belgian to perform, however, but he had precious little to do, as Huddersfield had one shot on goal—with that missing the target.

These games can’t be considered redemptive for Mignolet; instead, it will be his displays in bigger tests.

With Ragnar Klavan replacing Dejan Lovren, Gomez kept his place at right-back, despite producing an impressive display when shifted over to centre-back at Wembley last weekend.

Throughout a flat first half, the 20-year-old was one of few players willing to gamble in possession, sending balls into the right channel in an effort to prompt attacks.

Gomez had little to do defensively throughout, but shackled Tom Ince well when the ex-Liverpool youth shifted onto the left wing after the break.

Matip has been in miserable form for the majority of the season so far, and was arguably as culpable as Mignolet for Liverpool’s capitulation away to Spurs.

Like the goalkeeper, Matip had nothing to do in his own half throughout, and will have been disappointed not to have found the back of the net with two free headers at other end of the pitch.

A last-minute replacement for Lovren, who was injured in the warmup, Klavan was handed a big chance to make an impression.

The Estonian endured a rocky start, most notably when he lost his balance and stumbled off the pitch in possession, while his lack of pace was a clear target for Huddersfield.

Klavan found composure as Liverpool took hold of proceedings, however, and can cling to a welcome clean sheet.

Making his seventh consecutive start for Liverpool at left-back, Moreno has been one of Klopp’s most consistently strong players in 2017/18, keeping new signing Andrew Robertson sidelined.

He was quieter than in recent weeks, but still provided a welcome outlet on the left, and it was the Spaniard’s long pass that was deflected into Daniel Sturridge‘s path for the opener.

Like Matip, Henderson has struggled to settle since the start of the campaign, with his performances in the No. 6 role come under scrutiny.

Ahead of Saturday’s clash, the captain wrote in his programme notes that “we are all aware that level of performance isn’t acceptable from a team wearing this shirt,” issuing a rallying call.

Henderson’s first half was typical of his season so far, but he returned from the dressing room for the second half revitalised: full of running, creative one-touch play and bright forward bursts.

Surprisingly retained despite the return to fitness of Georginio Wijnaldum, Milner took to the field alongside Henderson as Klopp kept faith in his designated leaders.

The veteran improved as the game, and was particularly useful when the Reds bedded in outside the Huddersfield penalty area, involving himself in some lovely sweeping moves.

Milner’s delivery from corners was also excellent, with one providing Roberto Firmino his seventh goal of the season. Georginio Wijnaldum – 7.5 (Man of the Match)

After missing the 4-1 mauling at Spurs with a knee injury, Wijnaldum returned to the fold in comfortable surroundings at Anfield, tasked with providing thrust from midfield.

The Dutchman was full of energy throughout, as he battled with half-brother Rajiv van La Parra, showing industry and intelligent movement in the midfield.

Wijnaldum capped his performance with an excellent goal, his first of the season, driving into the roof of the net after an interchange involving Milner and Mohamed Salah.

In a campaign hampered with dismal results and questionable decisions off the field, Salah has been a continual ray of positivity in the Liverpool attack.

He was handed the ideal opportunity to make his mark when Firmino was brought down in the box on 41 minutes, but sent a poorly chosen penalty kick too close to Jonas Lossl.

Could have let his head sink after that save, but Salah, with his pace, movement and neat linkup play, was instrumental in Liverpool’s second-half domination. As Sturridge replaced the injured Philippe Coutinho, Firmino was entrusted with a wide role in Klopp’s three-man forward line for the third time this season.

It is far from Firmino’s best position, and the Brazilian regularly drifted into deeper, central areas to pick up the ball, interchanging with both Salah and Sturridge.

After spending the first half on the fringes, he sparked into life after the break, almost laying on Sturridge’s second before heading past Lossl to put the Reds 2-0 up.

Sturridge’s inclusion came as something of a surprise, given Alex Oxlade-Chamberlain‘s promising displays coming off the substitutes’ bench in recent weeks.

But chasing the 100th goal of his club career, the England striker will have been eager to shine, and though he was feeding off scraps, he opened the scoring on 50 minutes.

The 28-year-old is not operating at his peak, but nearly adding to his tally shortly after—denied by an excellent block—his quality in the final third is still vital.

Alex Oxlade-Chamberlain (on for Firmino, 66′) – 6.5 – Continued his run of bright cameos with a 24-minute showing full of invention and vitality.

Emre Can (on for Sturridge, 73′) – 6 – Brought on to add muscle to Liverpool’s midfield, performed his duties efficiently.

Dominic Solanke (on for Salah, 81′) – 6 – Deserving of more game time, always impressive coming off the bench.

Klopp made a bold show of faith in keeping the likes of Mignolet and Lovren in his side on Saturday, with some suggesting this was misguided stubbornness rather than sensitivity.

Fate intervened with Lovren injured ahead of kickoff, leading Klopp to make a swift change in bringing in Klavan, and the German was able to enjoy a comfortable afternoon at Anfield.

With the Reds going in 0-0 at half-time, Klopp clearly had an influence in the dressing room, inspiring his side to produce a much-improved display in the second half.

And encouragingly, Klopp also utilised his substitutes’ bench well, particularly with the introduction of Emre Can to provide further stability.

It was slightly disappointing not to see Ben Woodburn introduced after Wijnaldum’s clincher, in what would have been further reward after the youngster’s new five-year contract.