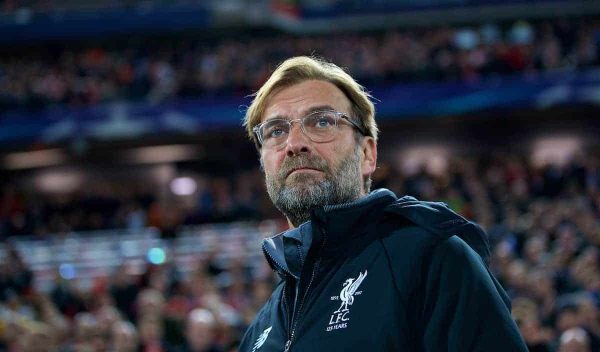 “Victory was a reward for patience, self-belief and experience” – Media on Liverpool 3-0 Maribor

The media praised Liverpool for retaining composure and finding another way to win in the eventual 3-0 win over Maribor at Anfield.

The Reds consolidated top spot in Group E and edged closer to the Champions League knockout stages with a comfortable victory over the Slovenians on Wednesday night.

It proved a frustrating first-half as the ultra-defensive visitors packed themselves behind the ball, but a strong second-half showing did the trick for the second game running.

The evening may not have gone as smoothly as planned, but the Reds deserve credit for showing impressive patience and ultimately getting the job done.

Reporters pointed out that it was certainly not a vintage performance from Klopp’s side, but praised the Reds retaining composure and finding an alternative route to claiming an important victory.

Anfield has been frequently frustrated by opponents like the Slovenian champions – devoid of ambition – but without Philippe Coutinho, Sadio Mané and Adam Lallana, Jürgen Klopp’s team found the answer.

Victory was a reward for patience, self-belief and experience.

Though another goal-fest didn’t arrive, the Independent’s Mark Critchley noted how victory was the most important aspect above all:

Even after scoring seven against this opposition a fortnight ago, the margin of victory here mattered little. To win is of far more importance.

The Mail’s Jack Gaughan praised the Reds for “winning differently”:

Liverpool have been asked to win differently twice in the space of five days. Both times they have answered emphatically. That, rather than the scorelines, fills Jurgen Klopp with renewed optimism.

Persistence paid off when it might have become easier to panic. Without ever really hitting their stride and with important players missing, the hosts scored another three goals and could easily have had more.

Writing for Goal, Melissa Reddy was impressed by Liverpool’s relentlessness:

It was not an easy evening for Klopp’s men, but it was rewarding nonetheless as they were unrelenting.

Meanwhile, the Liverpool Echo’s James Pearce has been impressed by the Reds’ positive reaction since losing at Tottenham:

Of course Liverpool will need to deliver when faced with much sterner tests to truly silence their critics, but since the debacle against Tottenham at Wembley the response has been promising.

Don’t forget this is the Reds without Philippe Coutinho, Sadio Mane and Adam Lallana and after the international break the cavalry will return. Better days undoubtedly lie ahead.

Certain journalists discussed the evident change of approach to a crossing game from Klopp’s side at Anfield, and felt it worked, thus assessing Liverpool now have a back-up plan.

Mark Critchley assessed the focus on a crossing game as a ‘Plan B’:

Liverpool had a clear ‘Plan B’, they just needed it to come off and minutes into the second half, it did.

This Is Anfield’s James Nalton felt the change in tactic paid off:

The persistence with this tactic eventually paid off at the start of the second half when Alexander-Arnold swung one in for Mohamed Salah who managed to get a foot on the ball and divert it into the back of the net.

This opened the opposition up and left more space through the middle, so there were fewer crosses in the second period, but if the first-half barrage was planned, it has to be said that it eventually worked.

Post-match reports featured praise for Liverpool’s midfield performance, while some noted the potential loss of Gini Wijnaldum, who limped off with an ankle injury.

The Telegraph’s Chris Bascombe felt the Reds’ energy rather than creativity in the middle of the park proved key to breaking through:

Nalton praised the midfield link-up between Milner and Can, and feels both should be regular starters:

The linkup between Can and Milner for the second goal was the smoothest piece of play not involving Philippe Coutinho seen in the club’s engine room for some time, and the finish was more convincing than many of Can’s team-mates’ efforts this campaign.

The pair have confirmed their place in the current best eleven and should start regularly if fit.

Salah already has 10 goals for his new club and is the talisman in the absence of Sadio Mané, but Milner set the higher tempo at the start of the second time.

Kelly thought Jordan Henderson made a positive impact after coming on, adding speed to Liverpool’s play on and off the ball:

Brought on far earlier than planned because of Wijnaldum’s injury, he helped instigate a much-needed brisker tempo and a stronger press that pinned Maribor deep in their own half for much of the game.

Alex Oxlade-Chamberlain was bright on his first Champions League start for the club and only the second in all competitions since his deadline-day switch from Arsenal, and while he featured in attack, he’ll be more than capable of playing as a No.8 in the absence of the Dutchman, Philippe Coutinho and Adam Lallana.

A debatable point given that Klopp has said Oxlade-Chamberlain is only training as a forward and has only been used there since his arrival at the club.

As always, reporters offered verdicts on individual performances at Anfield, with praise for Trent Alexander-Arnold and Salah but most of the focus on Oxlade-Chamberlain’s display:

His movement, buzzing across the line, wore the defence down, and he’s essential to the Liverpool cause.

In a game of packed defences, the width offered by the full backs was always going to be important and Alexander-Arnold knew his job.

While Joe Gomez seems to have won the race to be first choice in Nathaniel Clyne‘s continued absence, in these types of “park the bus” battles, Alexander-Arnold remains a better bet.

He remained on the pitch for the entire game and though there were some encouraging signs he’s not quite there yet.

Those signs suggest it will eventually work out for him under Jurgen Klopp but he needs a few more games like this to settle into match sharpness, rather than just learning his manager’s system in training.