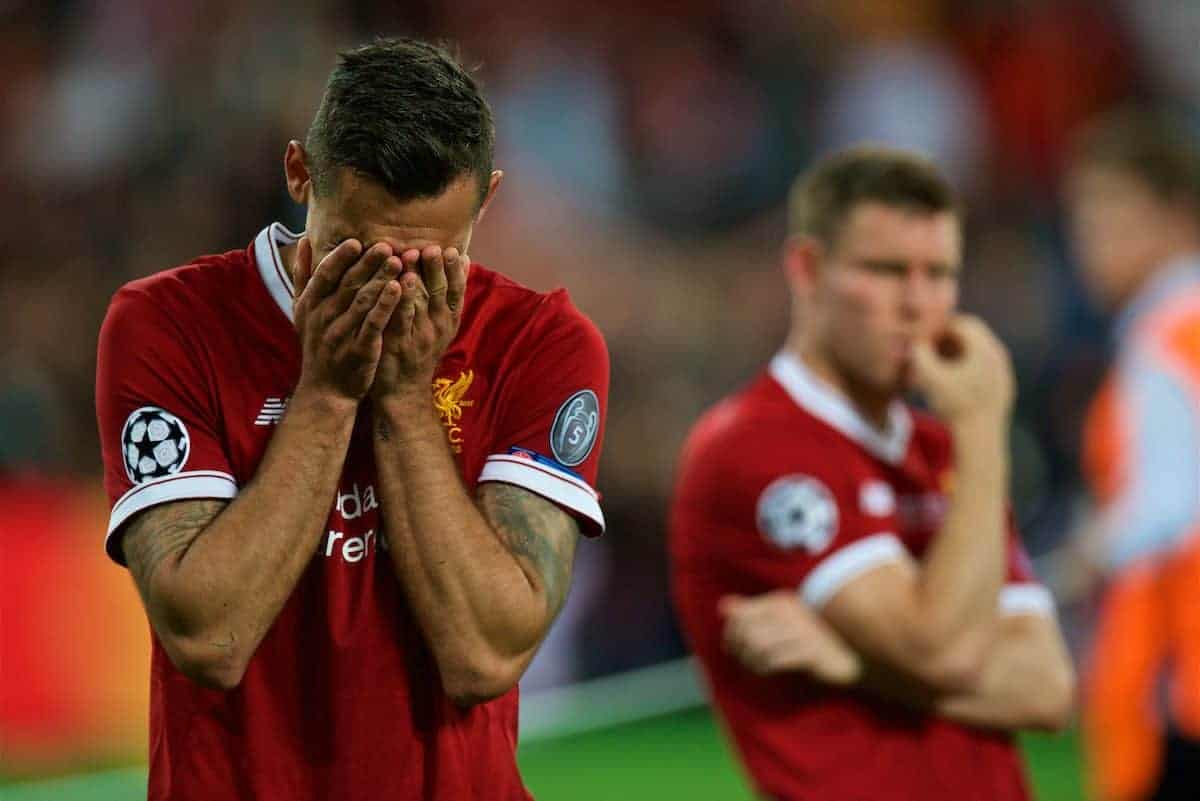 Liverpool fell at the last hurdle and lost 3-1 to Real Madrid in the Champions League final in Kyiv, with crucial moments going against the Reds.

Of all the players, of all the games…Mohamed Salah‘s incredible debut campaign with Liverpool came to the worst possible end, forced off through injury in the first half.

And not just a minor injury or muscle strain, a “serious” injury according to Jurgen Klopp after being grappled to the ground by Sergio Ramos.

Salah has been the Reds’ best goal threat, a relentless outlet and a forward who strikes fear into opposition defences, and he helped have Real Madrid on the back foot early on.

But a game-ending shoulder injury could also see him miss the World Cup, and there’s no doubt about the impact it had on Liverpool’s performance.

For the rest of the first half they barely ventured into Real’s half of the pitch without him, and the lack of cutting edge was painfully evident.

Adam Lallana, short of fitness, technique and the intuitive understanding that the regular front three have managed to grow between them, offered little.

Salah left in tears and it was uphill for the Reds from that moment on. As if dealing with Real Madrid’s great attack and losing the Reds’ own star wasn’t enough, goalkeeping errors effectively decided the game.

The scoreline from ‘normal’ goals was 1-1, but a pair of Loris Karius howlers made the biggest difference.

It’s not as simplistic as that, of course, and blame cannot not fall to Karius alone.

A simple lack of concentration and awareness cost the first, and the second error was doubtless a consequence of the first, still playing on his mind.

Karius has begged forgiveness and should not be vilified by fans.

It’s perfectly fine to accept that these were awful mistakes, unacceptable at the highest level, and at the same time not resort to ostracising a member of the squad.

Devastating lack of squad depth when it mattered Madrid brought on Gareth Bale, Marco Asensio and Nacho; one cost a world record fee and the other two are going to the World Cup with Spain, one of the greatest national teams.

Liverpool had two midfielders who have been injured, one of them all season, and a striker who sat unused who has just one goal for the club.

It showcases the levels, the squad depths which can make the biggest difference in the crucial games, as Zinedine Zidane turned to a match-winner in Gareth Bale and Klopp didn’t even have a real wide replacement for Salah.

It’s a key area for improvement, not a sudden and unexpected eye-opener by any means, but one which has finally cost the Reds dearly.

There’s no need, perhaps, to expect a squad depth to rival Real Madrid’s or Man City‘s, but certainly Klopp needs alternatives greater than he has had this term.

Midfield injuries and no alternatives in the front line at all have been the telling impacts on the Reds’ end of season results. A loss it might have been, but this wasn’t a collapse, a ruination, a dismal and disgraceful defeat. Far from it.

The Reds were the better side for the first half-hour, quite comfortably. Thereafter, it could easily have gone to 2-2 had Sadio Mane‘s fine effort not struck the post.

Real Madrid edged it and mistakes in goal were critical, but Klopp’s men still had fine perfomers throughout.

Mane, scorer and excellent all night long, worked his socks off.

Both full-backs were immense, particularly Trent Alexander-Arnold in the first half and then Andy Robertson in the second.

Dejan Lovren had a near-faultless game, Virgil van Dijk was his usual self, calm and influential, strong in the challenge.

Big performances from all, and reasons for pride.

The all-important progression and continuing the journey It’s hard, but this isn’t the end.

Indeed, Klopp’s job now is to ensure that this season is just the start of what is to come, keeping up the tremendous football we’ve witnessed and the all-attack style we’ve loved.

Adding players in the summer will happen—Naby Keita‘s in, more will follow—and next season will present another assault on domestic and European fronts.

Klopp is, clearly, building a team which can compete against the best.

By the very smallest margins, Liverpool fell short against the dominant team in the world over the last five years—there is no shame in that, only heartache.

A summer to continue the building, a summer to clear the heads, and we’ll go again in August.