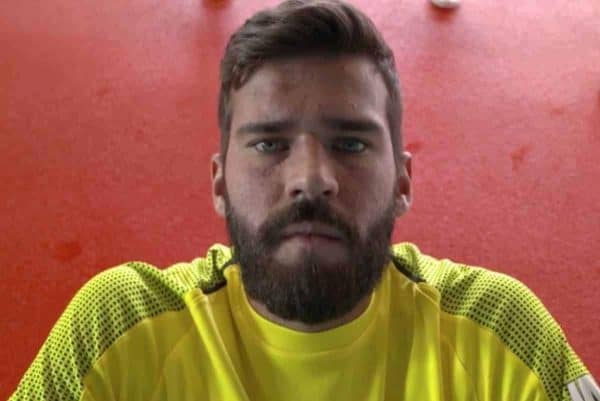 Liverpool paid a world-record £65 million to sign Brazilian goalkeeper Alisson from Roma this summer, but could have had him for 16 times less in 2015.

Jurgen Klopp expressed his delight at securing a deal to bring the 25-year-old to Merseyside last week, saying the Reds had “the opportunity to sign one of the world’s best goalkeepers.”

Alisson will join up with his new team-mates after this month’s tour of the United States, arriving alongside Roberto Firmino at the upcoming training camp in Evian.

But if things were different he may have already been in Klopp’s ranks, with Liverpool offered the chance to sign Alisson during his time at Internacional.

This is according to the Mirror‘s Simon Mullock, who claims the Reds were among a host of clubs in the Premier League and the Championship presented with a possible £4 million deal—with £3.1 million up front and £900,000 in add-ons.

The stopper’s agent, Ze Maria Neis, is said to have approached UK-based intermediaries to negotiate a move to England ahead of the 2015/16 campaign.

Despite Simon Mignolet‘s continued struggles, Danny Ward not threatening the Belgian’s place as No. 1 and Brad Jones leaving for Bradford City, the Reds passed up on Neis’ advances.

Liverpool, who still had Brendan Rodgers in the dugout, instead signed Adam Bogdan on a free transfer from Bolton Wanderers.

This summer, Bogdan joined Hibernian on a season-long loan, effectively seeing out the final year of his contract while Alisson establishes himself as bona fide No. 1.

Alisson eventually joined Roma the following summer, at 23, and after a season spent shadowing Wojciech Szczesny he took over as first choice for 2017/18.

Last season saw him produce a stunning campaign that garnered interest from Real Madrid and Chelsea, but Klopp’s conviction saw him make the move to Anfield.

There is no guarantee that Alisson would have developed into a world-class goalkeeper had he joined the Reds three years ago, particularly given Rodgers’ difficulties in his final months at the club.

But it does highlight how significant this summer’s outlay is, with Liverpool overlooking the price tag as Alisson was the best possible option they could have signed.

Klopp has confirmed he is likely to make his debut against Napoli in Dublin on August 4, and supporters can relish the prospect of seeing their new ‘keeper in action.