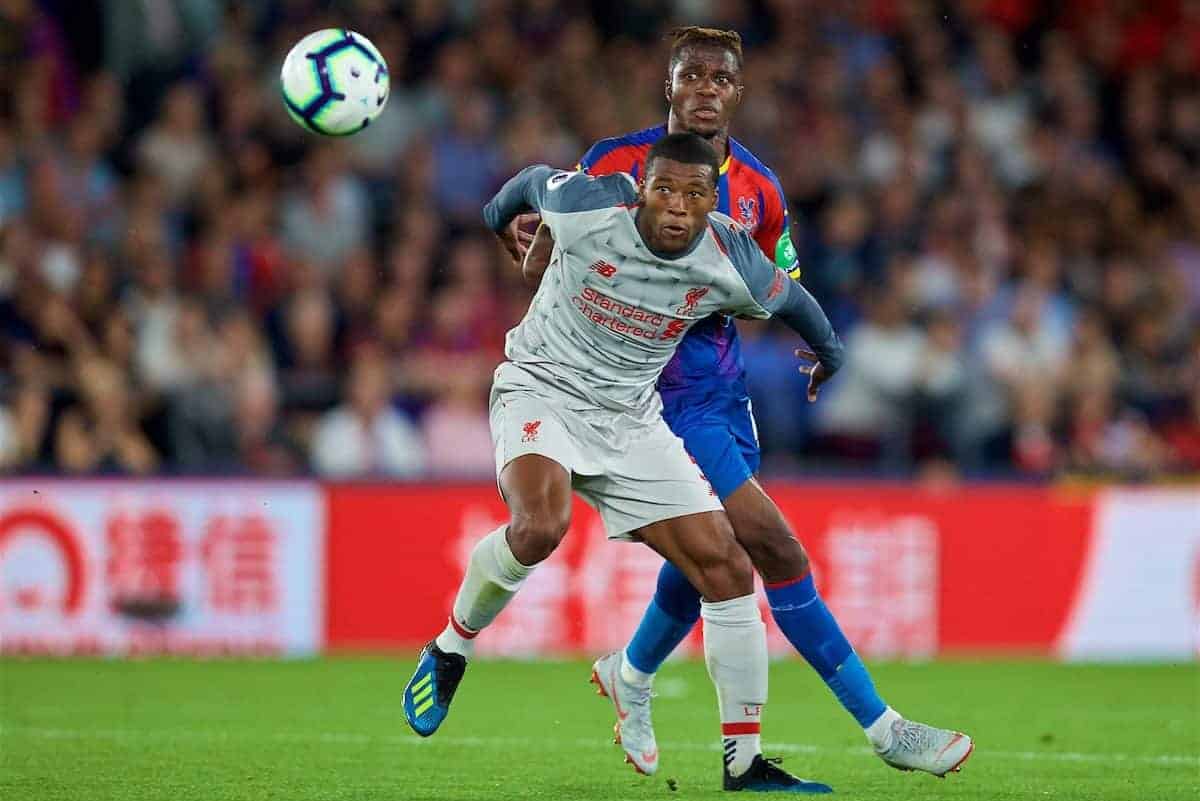 Liverpool showed how far they have come under Jurgen Klopp on Monday night, beating Crystal Palace 2-0 at Selhurst Park.

These are kind of matches the Reds have dropped points in far too often down the years, making title challenges almost impossible.

This is a new Liverpool, though, one full of resilience and defensive quality, and it felt like a win of real significance against the Eagles.

James Milner‘s penalty opened the scoring late in the first half, after Mamadou Sakho brought down Mohamed Salah inside the area.

The Reds were made to sweat, however, despite the sending off of Aaron Wan-Bissaka, with Palace staging a late onslaught.

Led by the magnificent Virgil van Dijk, Liverpool kept them at bay, though, and Sadio Mane broke away to seal the victory in the dying seconds.

It was a win that suggests Liverpool will fight Man City all the way this season, with Brighton & Hove Albion up next at Anfield on Saturday.

It’s two wins out of two for Klopp’s men, and although not everyone was at their very best, some individuals shone particularly bright.

We have compared our player ratings with those of the Liverpool Echo, the Mirror, The Independent, The Anfield Wrap, WhoScored and the This is Anfield readers: 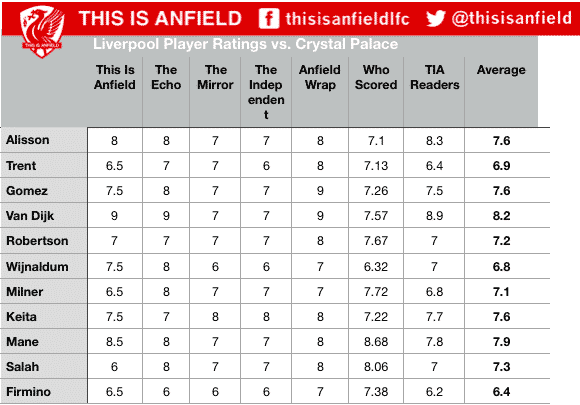 It was no surprise to see the Dutchman as the Reds’ highest-rated individual on the night, with his average rating (8.2) almost feeling slightly low, such was his brilliance.

“Helped encourage centre-back partner Gomez throughout the game and dominated Benteke to the point the striker was hooked. His height was such a bonus at set-pieces at both ends of the pitch,” wrote the Echo’s Ian Doyle.

Mane has been comfortably the most impressive of Liverpool’s much-praised front three so far this season, and he was the biggest attacking threat at Selhurst Park.

Someone who was strangely quiet by his remarkably high standards was Roberto Firmino, who felt on the fringes of proceedings throughout.

The 26-year-old earned the lowest average rating in south London (6.4), which is almost unheard of for the influential Brazilian.

Elsewhere, full-backs Trent Alexander-Arnold (6.9) and Andy Robertson (7.2) performed solidly without ever quite being at their best, providing energy up and down the flanks but not always delivering a telling final ball.

Gini Wijnaldum (6.8) and Milner (7.1) were in a similar boat, in terms of being unspectacular more than eye-catching, and were outperformed by the more flamboyant Keita.

Milner’s penalty was his eighth goal of that type in succession and he is now unbeaten in 48 matches in which he has scored – 38 wins, 10 draws.

Liverpool managed four clear-cut chances, according to Andrew Beasley for the Echo, which Palace haven’t allowed an opponent to do at home since October 2015.

Four or more clear-cut opportunities have only been managed 8.5 per cent of the time by away sides in the Premier League in the last three years, outlining how threatening the Reds were.

Beasley also showed that Liverpool’s off-the-ball work was as relentless as ever, with seven more tackles and 13 more ball recoveries made than Palace, despite enjoying 63 per cent of the ball.

Let’s hope for more of the same against Brighton this weekend, as Klopp’s men look to keep up their winning run.