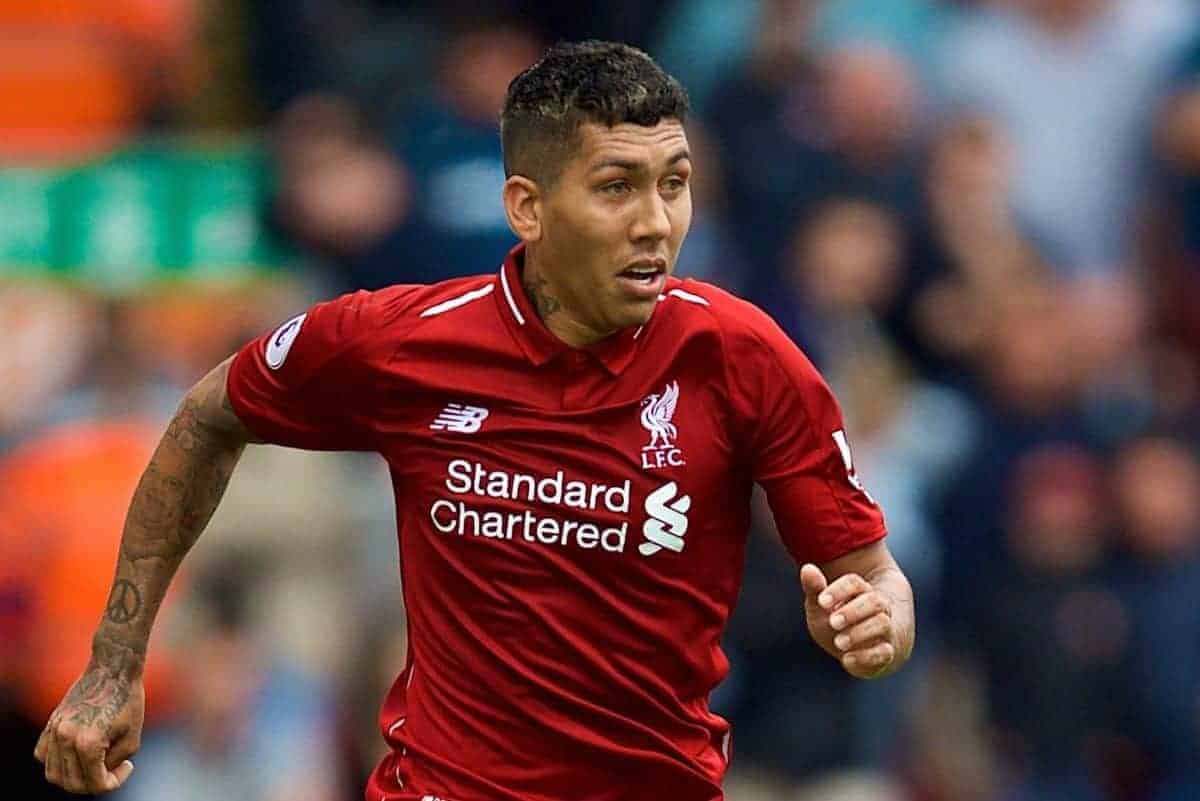 We’re just one game into the new 2018/19 Premier League season but it’s already clear that Jurgen Klopp has been busy behind the scenes.

His Liverpool side took the Anfield pitch on Sunday and dismantled West Ham with relative ease and sent out a message to their rivals in the process: the Reds means business.

From Naby Keita’s understanding with Sadio Mane on the left to the new dynamic between Trent Alexander-Arnold and James Milner on the right, there was plenty to take away from the season opener.

However, having said that, the most intriguing angle to come from the 90 minutes against Manuel Pellegrini’s men might have been the use of Firmino. 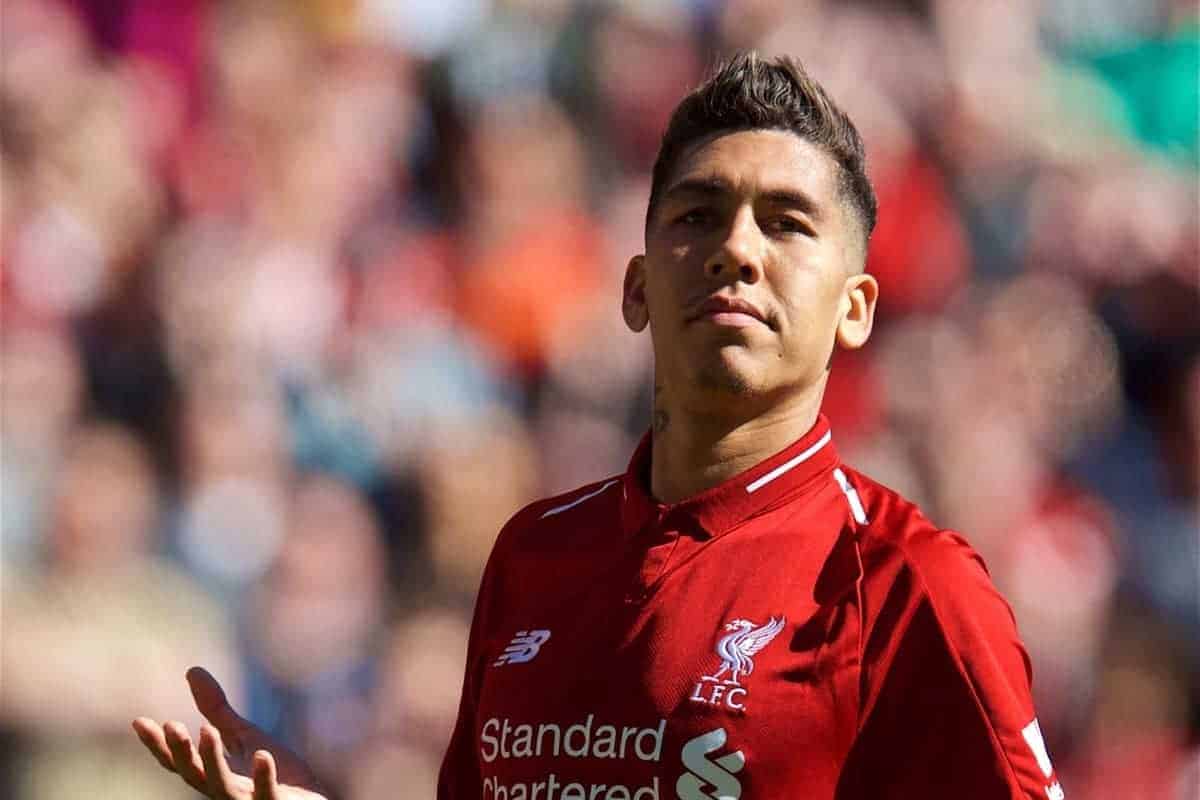 The Brazilian enjoyed his most productive campaign with the club last season and involved himself in over 40 goals in all competitions. He appeared to have embraced the No. 9 jersey and was perhaps the most important part of Klopp’s forward line.

Many had expected more of the same, and perhaps the former Hoffenheim man will resort to the Firmino of 2017/18 as he gets up to speed with everything having missed the majority of pre-season.

But Klopp and the coaching staff won’t be in any rush to get that version of the 26-year-old back. Not if Sunday’s performance is anything to go by.

There’s no beating around the bush, in comparison to Mane and Mohamed Salah he looked rusty.

He didn’t finish the match with a goal to his name, his final touch let him down early on, but he did register an assist—albeit with a little help from the linesman.

But the two Liverpool wide forwards enjoyed themselves against the Hammers, and a lot of that was down to Firmino embracing his new, tweaked role.

The Return of the False 9

Liverpool’s forward line constantly evolved throughout the 2017/18 season but the one constant was Firmino taking up more of a natural striker’s role.

It’s why a number of his goals, nine of the 15 he scored in the Premier League, came from within eight yards out. He was getting into dangerous areas on a regular basis and being the one to finish off team moves.

What was going on around him changed as the months progressed.

Philippe Coutinho was sold, Salah started to play closer to him during phases of play with Alex Oxlade-Chamberlain taking up the area on the right, while Mane adopted more of a creative role cutting inside from the left.

Against West Ham it was different. The No. 9 was playing in a withdrawn role the most part with Liverpool’s No. 10 and No. 11 leading the line from more central zones.

The average position map, taken from WhoScored—which uses touches to assess where players influenced the game from—gives a good visualisation of this: 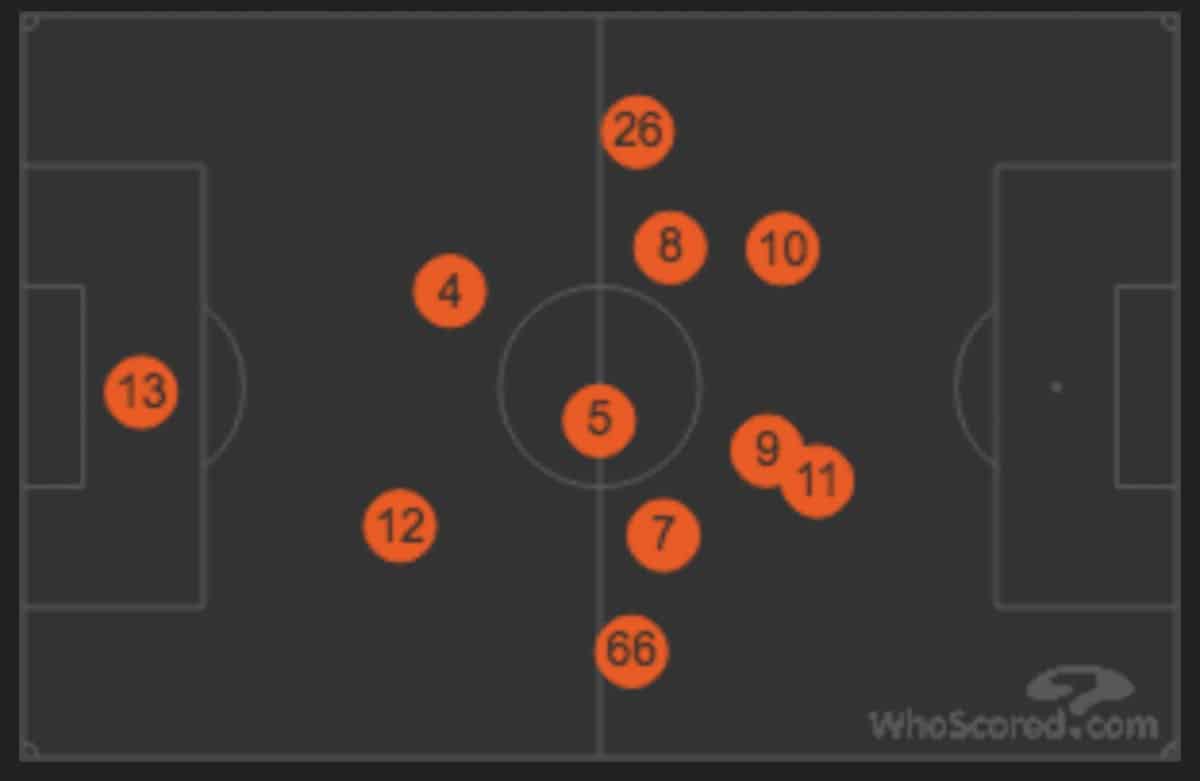 There are clear signs of a diamond with Gini Wijnaldum anchoring, Milner and Keiita operating on the right and left of midfield with Firmino at the tip. It’s not as symmetrical as some might like but football isn’t played on paper so it will never be perfect.

It appeared to be a clear tactic on Klopp’s part to have Firmino be the link man between midfield and attack and to have Mane and Salah be the ones to occupy all four of the defenders by taking up half-spaces between full-back and centre-back.

It created overloads in midfield and it was how the Reds could build their attacks. 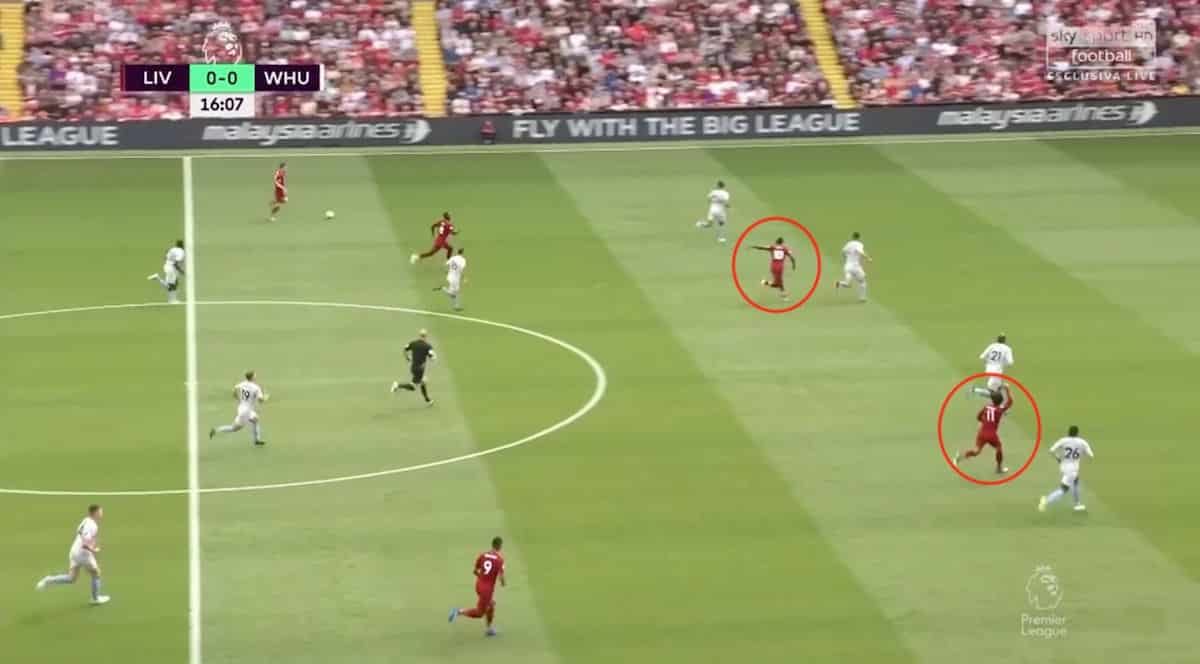 The image above is taken after Liverpool win the ball back off West Ham in the right-back area.

Despite it being Salah’s side it’s Firmino who drops deep to show for the ball. He’s ignored and the play is quickly switched to the left.

Mane and Salah’s starting positions see them effectively pin the four defenders giving the Reds space to operate in the space between midfield and the back line, and that’s why Firmino’s in acres of space and Declan Rice is scrambling to keep up with those on the left flank.

It’s only when Firmino and Keita arrive, and it becomes four vs. four, that the new Liverpool No. 10 takes up a wide position.

This eventually leads to the first real chance of the game when Milner’s ball across the face of goal manages to evade the front three. 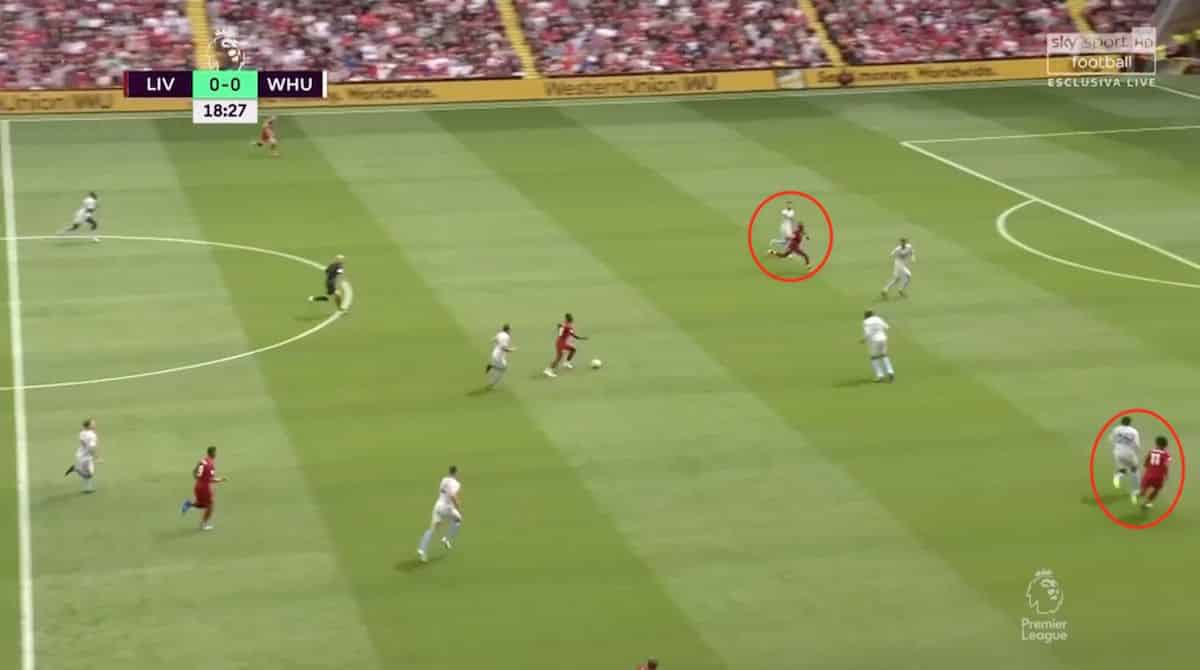 The next image is from just before the opener. It’s similar to the first opportunity with Firmino dropping deep to offer for a pass and dragging players with him to create space for others.

Alexander-Arnold ignores him and plays a sublime ball into the feet of the new No. 8 and he drives forward.

Circled to the left of the screen, the former Red Bull Salzburg attacker has maintained his position of occupying both full-back and centre-back to leave Andy Robertson free down the Liverpool left.

Salah’s peeled away to the outside of the West Ham left-back, his blindspot, to create a one-on-one on that side in plenty of space. 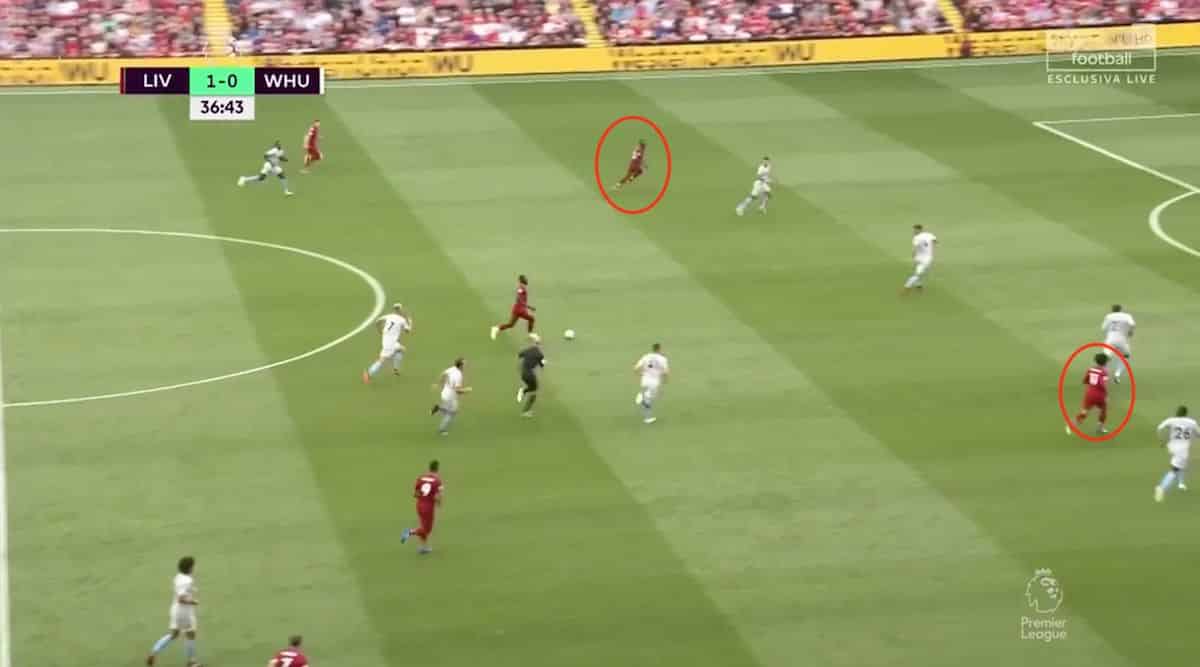 This time around the roles are somewhat reversed as it’s Mane taking up a position on the outside of the full-back while Salah sits between two defenders leaving just the one centre-back free to push out and stop Keita.

This move eventually finishes with Mane playing the ball to Firmino on the right who then created a chance for the Egyptian King—but he saw his right-footed effort saved by Lukasz Fabianski.

Firmino sacrificed individual glory for the good of the team and it quite clearly worked in what was one of the most selfless performances he’s put in during his time on Merseyside. Not just in this one move, but throughout the match.

He finished with two key passes to his name, and only Milner could better that with three.

Another interesting stat from the match was how many passes Firmino attempted and how many he completed. 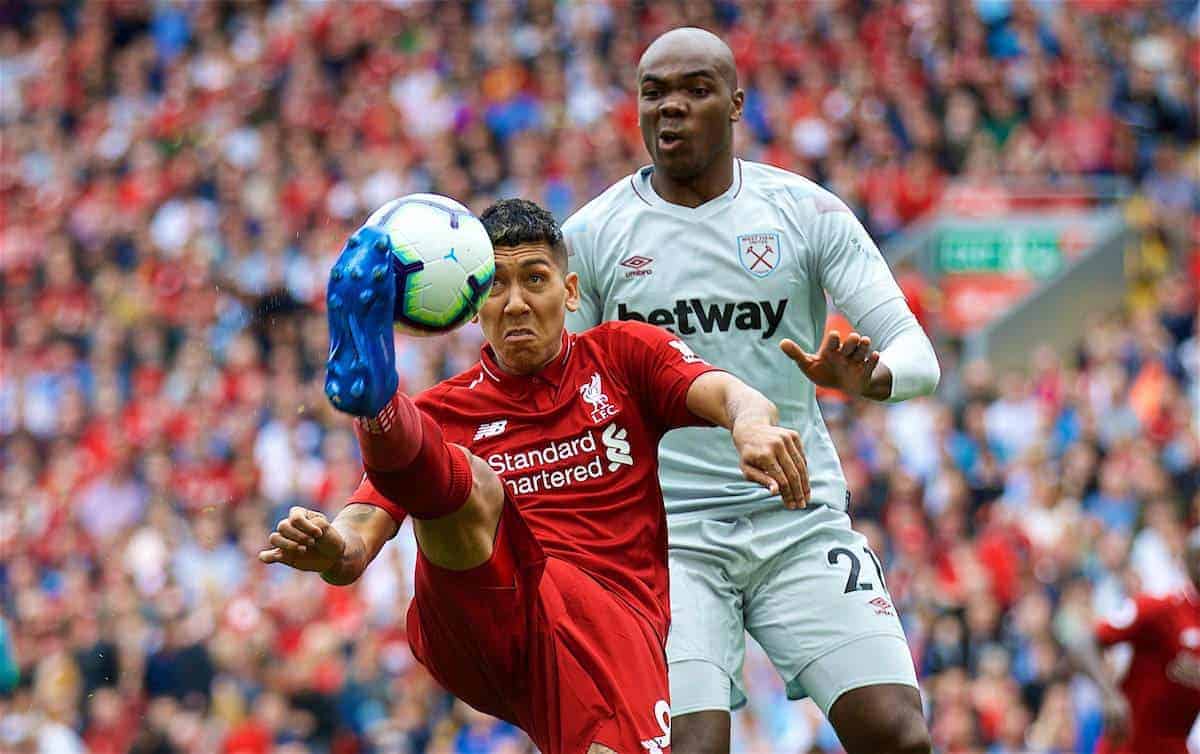 Last season he was averaging 31 passes per 90 minutes across all competitions and he had a pass success rate of 73.2 percent. Against the Hammers he played 35 passes and completed 80 percent.

It’s difficult to read stats when the sample size is just the one game but they do back up that the Brazilian was more involved but he was keeping things a little simpler.

Again, it’s just one game, but could this be something Klopp looks to do now to add more creativity to his midfield unit?

He obviously felt as though it was lacking something otherwise he wouldn’t have gone after Nabil Fekir. 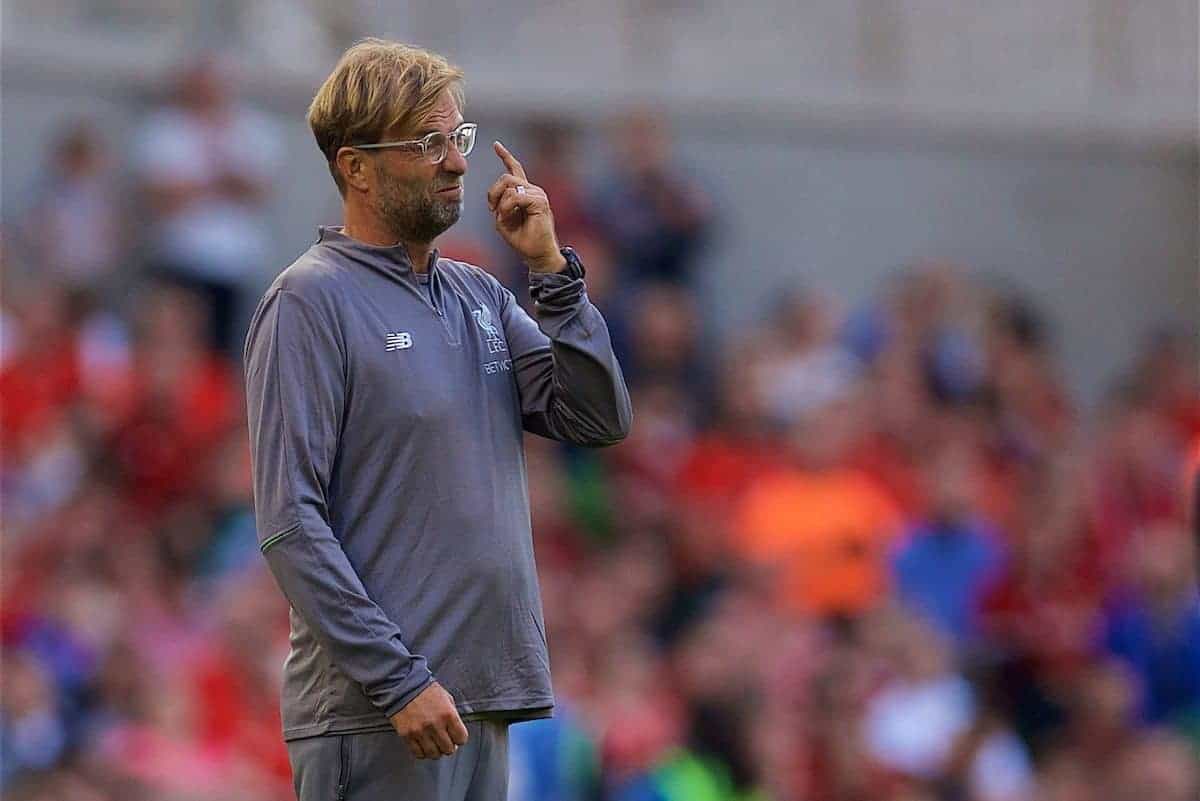 A medical issue put a stop to that deal and the Reds didn’t make a move for anybody else, so could playing Firmino as a false nine, or attacking midfielder, be the solution?

It’s certainly a system which can work and the West Ham match proves it.

Klopp’s added another string to his bow and it gives opposition managers another headache.