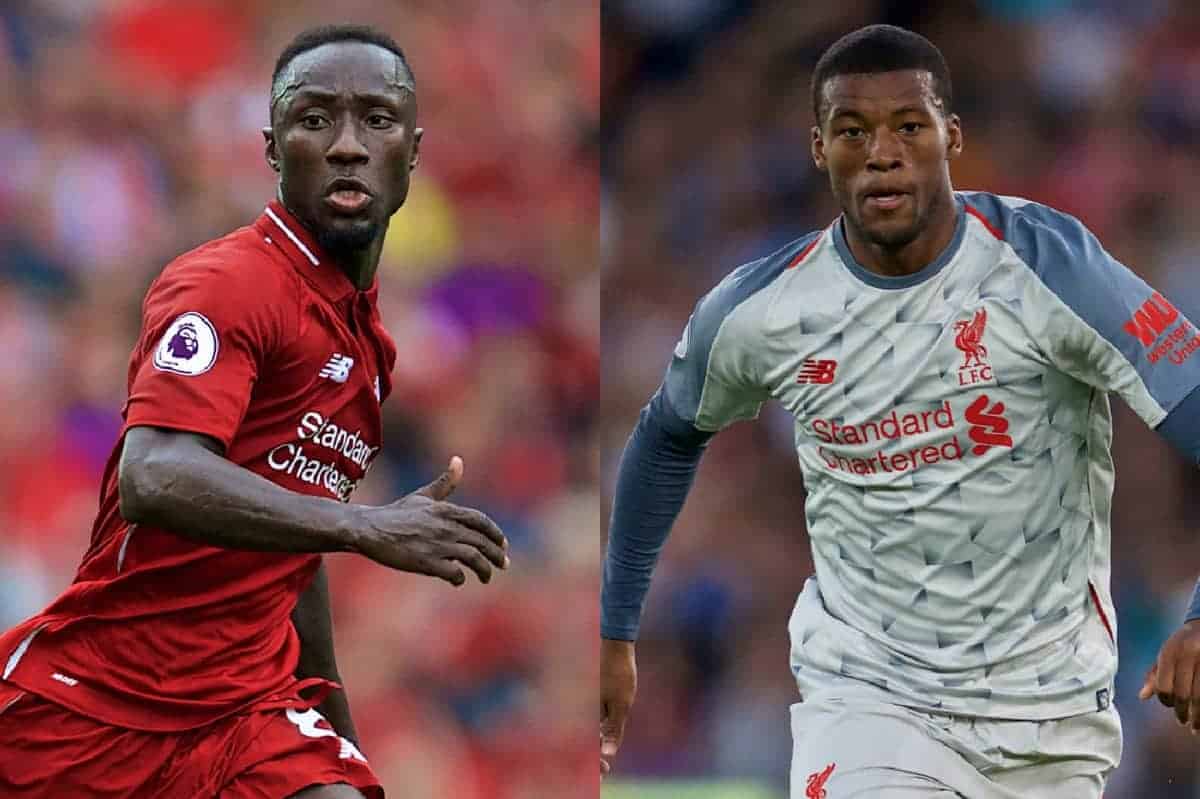 Jurgen Klopp looks set to stick to his winning formula as Liverpool take on Tottenham at Wembley, but will Naby Keita or Gini Wijnadum get the nod?

The Premier League is back after the international bore-fest and the table-topping Reds resume seeking to make it a perfect five wins from five.

Klopp changed his starting XI just once across the first four games before the break, with consistency in selection helping the Reds make a 100 percent winning start.

That will soon change and possibly from Saturday’s Wembley trip, as utilising the squad will be vital to ensuring the Reds emerge strongly from a season-shaping run of seven games in 23 days across three competitions.

So how could Liverpool’s starting XI look for the first top-four clash of the season? 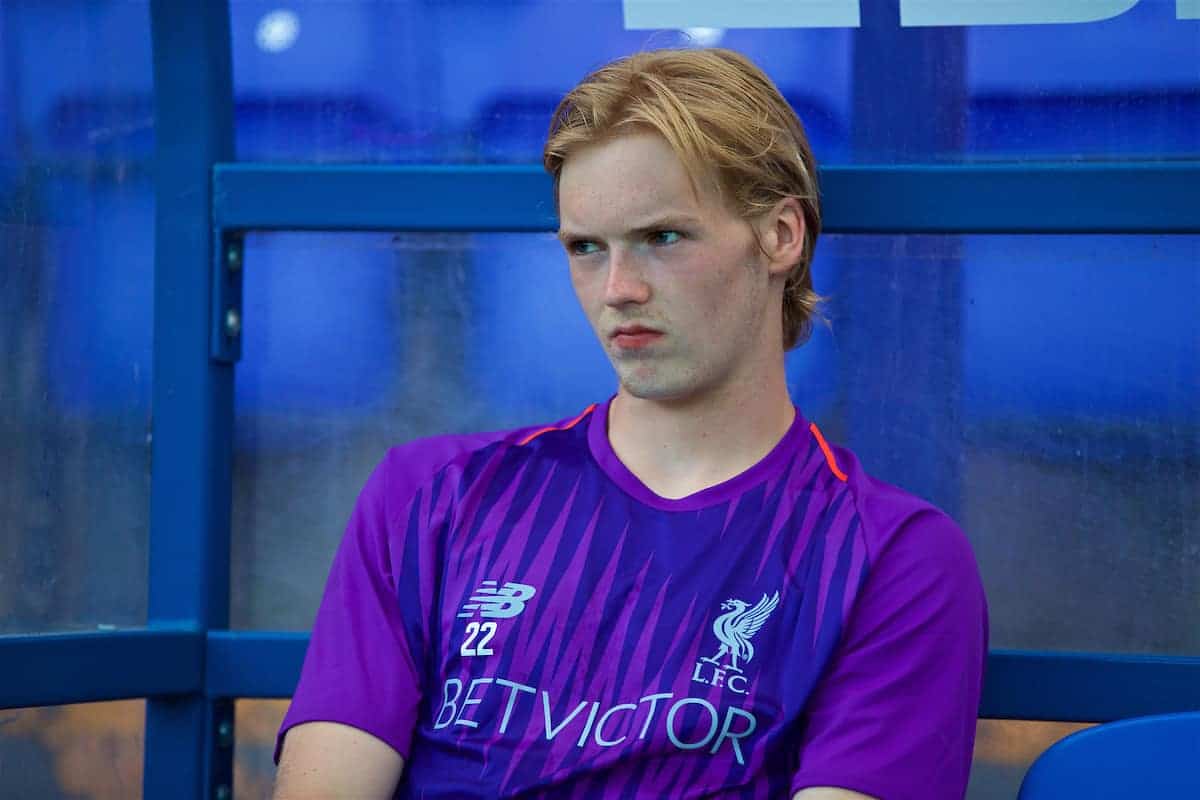 The Reds thankfully managed to avoid any major injury setbacks during the international break, handing Klopp a near full squad for Saturday’s clash.

Dejan Lovren, Adam Lallana and young ‘keeper Caoimhin Kelleher are the only absentees, with abdominal, groin and calf issues respectively.

Simon Mignolet has recovered from a finger injury and will feature on the bench.

A nice boost comes in Alisson, Roberto Firmino and Fabinho all being available after sitting out Brazil’s win over El Salvador in midweek.

However, in his pre-match press conference Klopp confirmed a patient approach will continue to be taken with his new midfielder.

More positive news is that all first-choice defenders and forwards are fit, meaning all is likely to remain the same at the back and in attack.

Meanwhile in midfield, Naby Keita is pushing for a recall having dropped to the bench at Leicester, but Jordan Henderson will push to keep his place.

Xherdan Shaqiri will be hoping his bright cameo in the same game earns him a first start.

In his press conference Klopp gave little away with regards to his lineup but confirmed rotation will be in full force during the hectic upcoming run:

“Of course we have to [rotate]. The first three games we had the same lineup, then we changed one position.

“It was just to get the points, get a good start, create the basis.”

However, it seems unlikely the rotational approach will come into play with immediate effect or that any drastic changes will be made at Wembley.

Indeed, Klopp’s patience with new arrivals combined with the upheaval of the international break suggests he will stick closely to the winning formula discovered before the pause.

It would be an understandable move to deploy one of the selections—or something similar—from the first four games.

Keeping faith with a consistent, in-form group could be key to overcoming the far-from-ideal preparation time for the biggest challenge so far this season.

One possibility is that Klopp deploys the exact same XI that started the 2-1 win at Leicester last time out.

That would mean Henderson, James Milner—a certain starter having been at Melwood throughout the break—and Wijnaldum are given the nod again, with Keita kept in reserve: 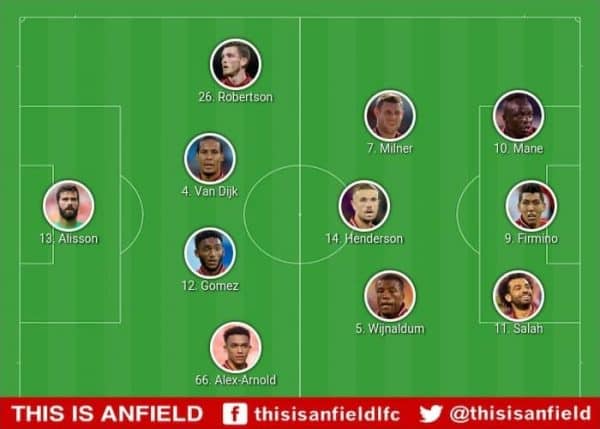 However, despite the victory that midfield unit failed to impress, struggling to gain control or offer any composure and steel against Leicester’s energetic centre.

Klopp will have noted that and will certainly not want a repeat against a Spurs side who have more quality to punish such a lacklustre showing should it transpire again.

This could—or rather should—persuade Klopp to reintroduce Keita to the fold.

The Reds have looked best at this early stage with a Wijnaldum-Keita-Milner trident, and it would be good to see this unit in operation again on Saturday.

But it seems more likely that Wijnaldum makes way and Henderson starts as No. 6 to join Keita and Milner in a new-look central trio: 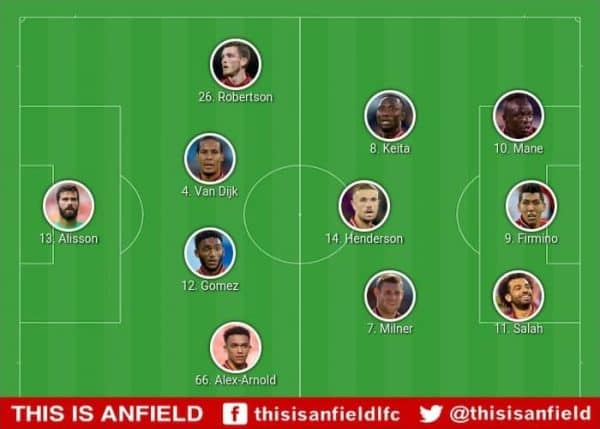 It’s been a great start but the real test begins now for Liverpool, and the Reds must show belief to start as they mean to go on by claiming another statement win at Wembley.