Jurgen Klopp has expressed his frustration after Jan Vertonghen left Roberto Firmino with an eye injury during Liverpool’s 2-1 win at Tottenham on Saturday.

EDIT: Firmino is confirmed to have suffered an abrasion to his eye, but with no lasting damage.

“It was just a scare. My eye is OK and so am I,” he wrote on Instagram.

Firmino, who scored the Reds’ second in a victory that should have been vastly more comfortable, was forced off with 15 minutes to play after receiving treatment on the pitch.

This came as the result of a swipe from Spurs defender Vertonghen, and resulted in a difficult end to the game for the visitors as Klopp was left to replace the Brazilian with Jordan Henderson.

It remains to be seen whether Firmino’s injury will keep him out of Tuesday night’s Champions League clash with Paris Saint-Germain at Anfield.

But speaking after the game, Klopp certainly didn’t rule out the possibility, as he questioned how Spurs were awarded a free-kick after the incident.

“We have, I’m not sure, but maybe an injury with Roberto. We don’t know exactly in the moment. It was something with his eye,” he told reporters at Wembley.

Michael Oliver gave this as a foul against Firmino #TOTLIV #LFC pic.twitter.com/GsFi77rqaU

“We will see, and then we play Paris Saint-Germain—they won yesterday without Neymar and Mbappe, so they can obviously rest players in the league.

“It was a free-kick for Tottenham, right? How funny.

“I didn’t see it back, I didn’t see anything back from the game. I only saw the situation from 60 yards away.

“I have no clue what exactly happened, but it’s something with the eye and for sure at the moment it’s not comfortable for him, so we will see.” 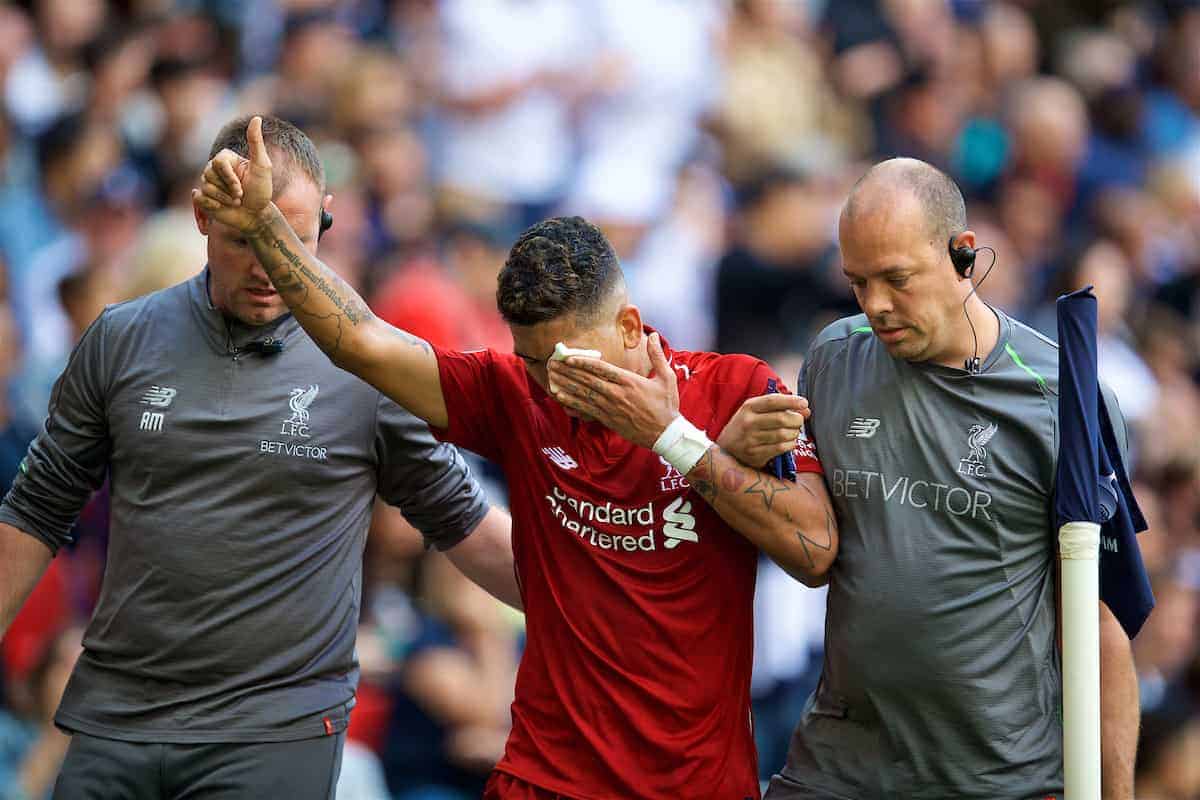 With just three days until PSG arrive on Merseyside for their Group C opener, if Firmino doesn’t recover he will be a major loss for Liverpool.

The 26-year-old was arguably Klopp’s best performer on Saturday, alongside James Milner and opening goalscorer Gini Wijnaldum, and the alternatives are certainly less suited to the role.

Daniel Sturridge eventually replaced Firmino up front, but he offers a much different skillset.

The hope is that the No. 9 is able to make his comeback in time for Tuesday night, as he is essential to the Reds’ system.