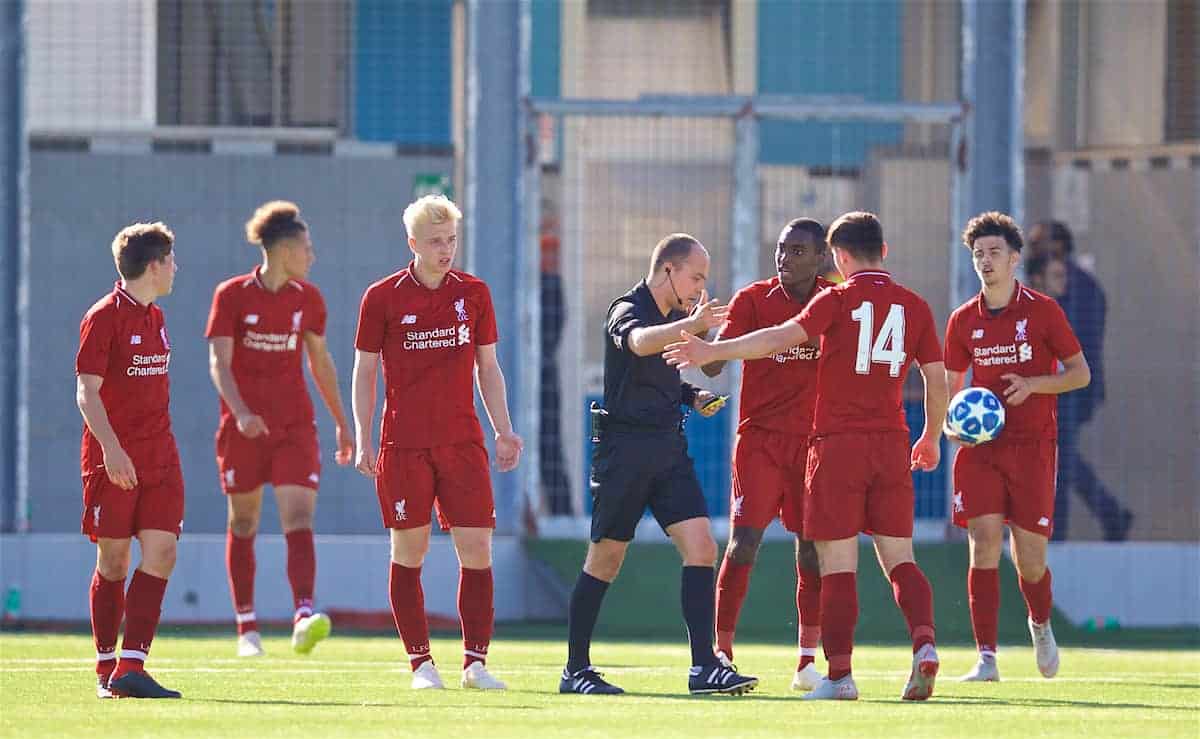 Liverpool U19s drew 1-1 away to Napoli U19s in the UEFA Youth League on Wednesday, with a bizarre, controversial stoppage-time equaliser robbing them of all three points.

Having thumped PSG 5-2 in their opening Group C fixture of the season, the Reds youngsters were in good spirits in Naples.

Barry Lewtas was afforded the luxury of selecting an unchanged starting lineup from that game, with his side strong favourites to prevail at Stadio Comunale di Frattamaggiore.

Adam Lewis, man of the match against PSG, was again looking to shine at left-back, while Curtis Jones was expected to be a prominent figure in the middle of the park.

Speedy wide man Bobby Adekanye, stretchered off with a knee injury for the U23s against Arsenal last month, also started after a swift recovery. 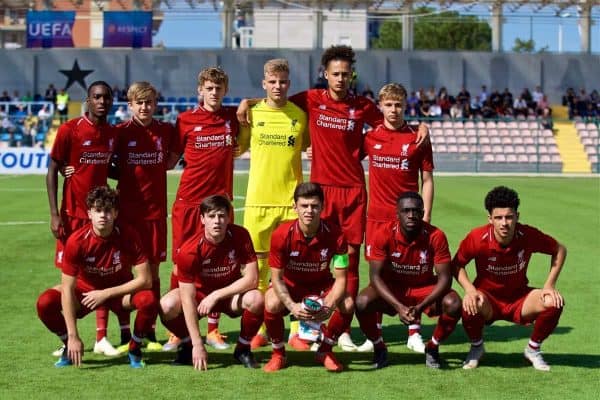 Napoli, who drew 1-1 with Red Star Belgrade in their opening game, were outplayed by the young Reds in the opening exchanges.

It was a scrappy start, however, with chances few and far between.

In the 28th minute the visitors’ dominance paid off, with Adekanye getting on the end of Jones’ lofted pass, before heading home from a few yards out.

Unfortunately, the goalscorer’s afternoon came to an abrupt end soon after, with an ankle injury seeing him replaced by Luis Longstaff.

Liverpool’s high press continued to cause a limited-looking Napoli side problems, with their ball retention also superior, although Jaros made a superb stop to deny Filippo Perini just before the break. 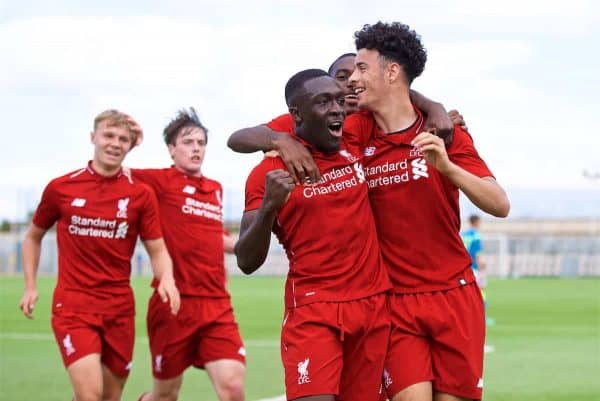 Paul Glatzel was somehow denied from the rebound by Alessandro D’Andrea, after Camacho’s effort was saved, as Lewtas’ youngsters looked to kick on early in the second-half.

Adekanye was seen hobbling around the pitch in a protective boot, but his teammates were still controlling matters on the field.

Liverpool made a double change with 17 minutes remaining, with Bobby Duncan and Leighton Clarkson coming on for Glatzel and Jake Cain, respectively.

Clarkson nearly pounced immediately, after combining with fellow substitute Duncan, but Niccolo Bartiromo made a vital block on the line.

Gaetano curled a free-kick narrowly wide and then couldn’t get on the end of a low cross, as Napoli searched for an unlikely equaliser.

It was then Alessandro Zanoli’s turn to come close, heading wide completely unmarked from a corner and in the dying minutes, Jaros made a wonderful save to prevent Tom Clayton from heading into his own net. 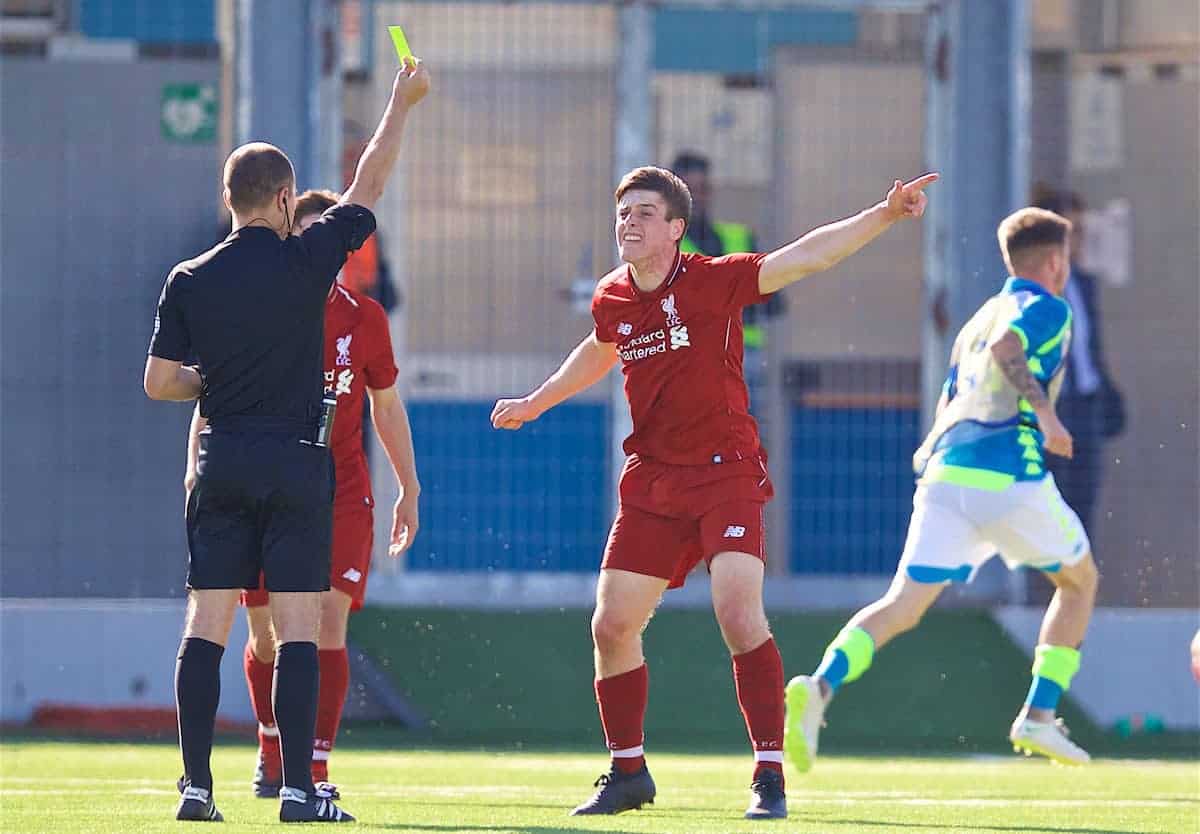 Two balls were on the pitch at the same time, with one Napoli player actually throwing a ball with his hands while the home side scored the equaliser through Gaetano.

The goal itself wasn’t even shown in realtime as the cameraman was showing the ball that was in the middle of the pitch, while Napoli were scoring inside the box.

Liverpool players remonstrated with the referee but somehow he failed to understand what had gone on and none of the other officials stepped in to rectify the mistake either.

It was a bitter pill to swallow for the young Reds, but four points from two games still represents a good start to their UEFA Youth League campaign.