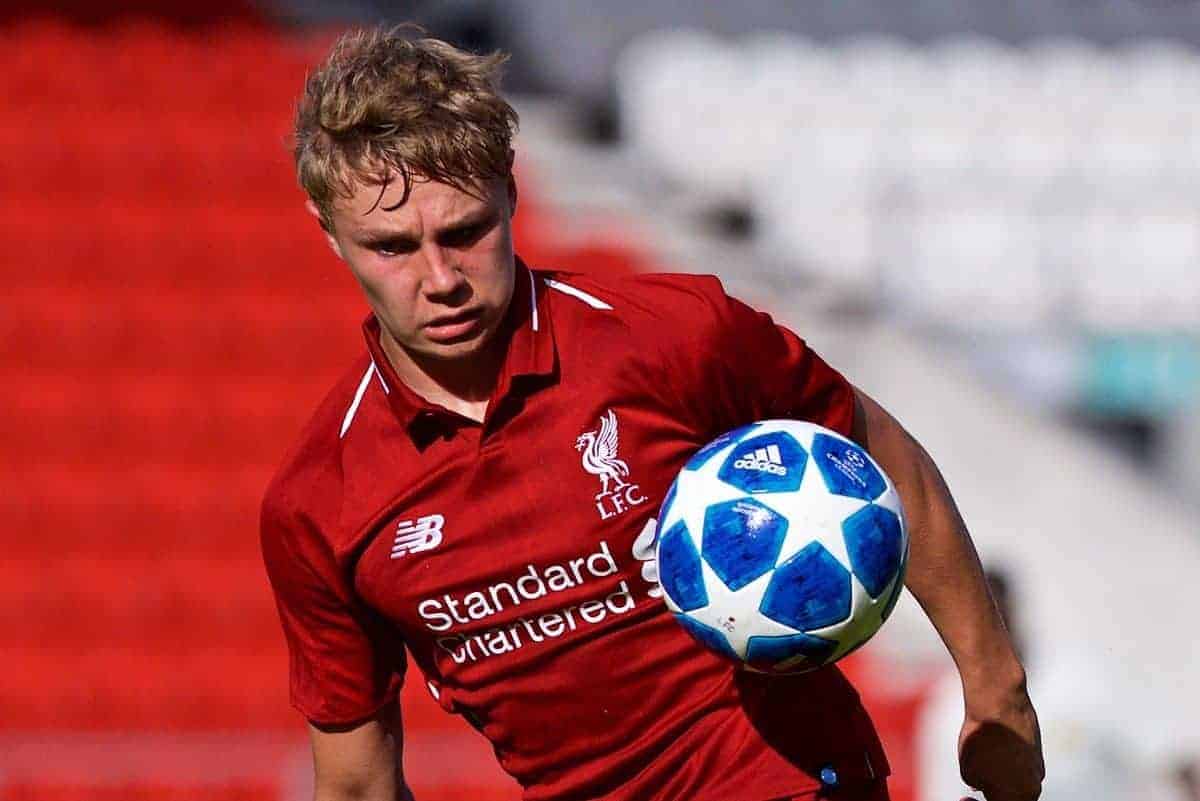 Liverpool U18s cruised to victory in the Premier League Cup against their Reading counterparts at the Kirkby Academy on Saturday.

Liverpool’s young stars shone brightly at the Academy in an early Saturday kick-off, thrashing Reading with a strong second-half showing.

Paul Glatzel and Bobby Duncan grabbed a brace apiece in attack, but it was schemer-in-chief Fidel O’Rourke who deserves the praise for a performance of non-stop movement and invention.

Barry Lewtas‘ side started well, but missed a host of chances early on.

Several deliveries from the right could have yielded an early goal, but O’Rourke had an effort cleared off the line and Luis Longstaff put one just wide.

Their profligacy might have been punished as Reading hit the woodwork just before the half-hour mark, before Rhys Williams had to be alert to cover and clear as the away side looked to go one-on-one with Vitezslav Jaros in goal.

It was the Reds who found the breakthrough shortly before the break, though, O’Rourke creating the chance for Glatzel to finish from close range—his 11th of the season.

Further chances fell at either end in a frantic spell before the half-time whistle, as O’Rouke latched onto a bad backpass but missed his first touch, Tom Clayton’s header almost looped in for an own goal and was saved by Jaros, and Longstaff produced a great solo effort which flew just off target.

Longstaff put in an accomplished display in particular, with his mix of powerful running and good close control making for several exciting individual moments.

Just after the hour mark the Reds doubled their lead through a familiar combination: O’Rouke with the assist, Glatzel with the finish.

That was the signal for changes to be made by Lewtas and the floodgates really opened from that point, as Reading struggled to contain a Liverpool team which became more dominant and rampant as the game wore on.

Longstaff remained a danger and was unlucky to have one effort saved and another fly over.

Elijah Dixon-Bonner and Duncan came on and immediately combined for the third goal, the latter sweeping home for his 10th of the season.

The three-goal lead then became four and five in the space of 90 seconds, as Clayton got a touch on a cross to beat the ‘keeper and Duncan scored his second.

There were more chances in the closing stages, notably for Duncan to notch his hat-trick, but the final word appropriately came from the effective O’Rourke, as he instead laid on his third assist of the game for Dixon-Bonner to wrap up the scoring.