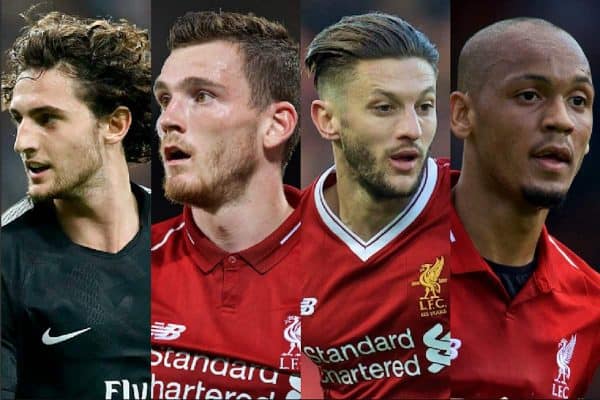 We round up the latest Liverpool news and transfer rumours on Friday, on the eve of the Reds’ crucial Premier League clash with Arsenal.

The PSG midfielder is yet to sign to new deal with the Ligue 1 champions and has been linked with a move away on a free transfer at the end of the season.

Liverpool have been tipped to make a play for him a number of times in recent months.

You could easily envisage Rabiot eventually extending his stay at Parc des Princes – Barcelona feels a more likely destination than Anfield, if he chooses not to.

The Catalan giants reportedly see Liverpool as “tough competition”, though.

Andy Robertson believes Joe Gomez is the quickest player at Liverpool currently, in a squad full of contenders in that area.

“But if I was to back anyone, it would be Joe [Gomez]. I think everyone has seen his recovery pace.

“I wouldn’t back myself! Trent [Alexander Arnold] would back himself as well.”

Recent statistics reveal that Robertson’s opinion is correct, with Gomez picking up a speed of 21.6mph against Leicester City – the most by a Reds player this season.

“I think it will be tough for Lallana to get in ahead of Fabinho and Keita.

“He has been very unfortunate with injuries, but he has probably slipped down the pecking order while he’s been out.

“He isn’t as big a miss as he was, but that’s the nature of now having a bigger and more competitive squad.

“He has such quality, particularly in tight areas, that I don’t think Klopp will be looking to sell him, though. He might look to move for more minutes eventually, though.”

Lallana was off the pace in the 4-1 win over Cardiff City, looking a little as though the team has moved on while he has been out injured.

Klopp is a big admirer of the 30-year-old, but it is tough to see how he will be a regular this season and beyond.

Liam Coyle’s impressive progress in Liverpool’s Academy has been rewarded with a new contract, the club confirmed on Friday afternoon.

The 18-year-old midfielder has been a part of the Reds’ youth setup since he was 10, making his U18s debut at the age of just 15.

Coyle has managed 47 minutes of Premier League 2 action for the U23s this season, however, despite his still tender years.

Kevin De Bruyne is arguably the best player in the Premier League on top form, with his influence at Man City unrivalled.

The influential Belgian has picked up another knee injury limping off in Thursday’s League Cup victory at home to Fulham.

It has been confirmed that he will be out of action for around five or six weeks with ligament damage, which, from our perspective, can only aid the Reds’ title chances.

Ridiculous Rumour Of The Day

Even when the transfer window is shut it is impossible to avoid some laughably stupid stories emerging.

Today it’s the turn of Le Parisien, who bizarrely claim that Fabinho could join PSG on loan in January, having grown “bored” at Liverpool.

It is a nonsensical story, with the Brazilian growing into his role as the Reds’ first-choice No.6 and looking like a key player for years to come.

Quite why the Mirror have taken the time out to make it a ‘report’ is odd.

Video Of The Week

"Tottenham for 30 years of our lives were spineless and soft, flaky, rubbish, you could be 2-0 down against them and think you would win 5-2."

We round things off with our choice of Video of the Week, featuring none other than Reds legend Jamie Carragher.

The 40-year-old and Gary Neville were in outstanding form during Sky’s Monday Night Football coverage, arguing like tetchy mates in a pub about Tottenham‘s spending under Mauricio Pochettino.

Both make valid points and the fact that their voices get increasingly higher-pitched the angrier they get makes it even more brilliant.

It is box office punditry, between a duo head and shoulders above anyone else at the moment. A true ‘bromance’ has formed!