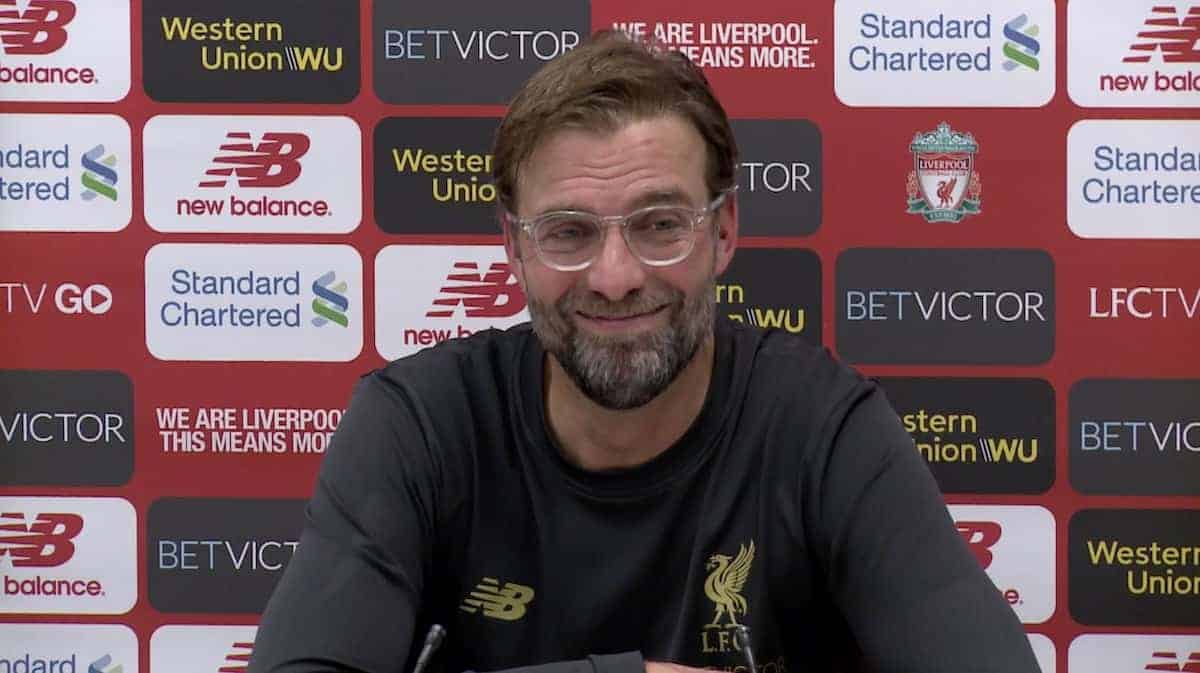 Jurgen Klopp was as Melwood for his pre-Man United press conference on Friday, discussing injuries, transfers and Jose Mourinho.

The Reds face one of their biggest fixtures of the season on Sunday afternoon, as United come to town.

There may be 16 points and five places separating Liverpool and their rivals, but it promises to be a tight game at Anfield.

Both of the last two meetings on Merseyside have ended in goalless draws, with Mourinho’s defence-minded approach frustrating the hosts.

The German spoke respectfully about his managerial opponents’ style, however, ahead of a game that many are tipping Liverpool to win.

“I don’t think Jose Mourinho ever has a lack of ambition,” Klopp told reporters.

“He just does what he thinks is right, and he’s one of the most successful managers in the world.

Klopp also provided an injury update on Trent Alexander-Arnold and Nathaniel Clyne, with the former ruled out but the latter in contention for a first start since May.

“With Trent [Alexander-Arnold], it’s not as serious as it is with the other boys,” he added.

“For Trent, it’s day-by-day. We will find a solution at the weekend.

“Clyney was unfortunately injured for the last two or three weeks – nothing serious but serious enough that he couldn’t train.

“He has been in training for four days – is he ready for 90 minutes? I don’t know. But he is ready. He is a very experienced player.”

Klopp did go on to add that Liverpool have “other options” at right-back, including James Milner, Fabinho and Rafa Camacho, which suggests Clyne is unlikely to start.

Finally, the boss gave an honest verdict on whether Liverpool would buy a centre-back in the January transfer window, given the defensive shortage with Alexander-Arnold, Joe Gomez and Joel Matip all out.

“If you asked me two weeks ago about transfers, if we do something, I’d say ‘probably not’,” he admitted.

“Now we have two centre-halves, it’s still not really likely because they are not long-term things.”

Sunday’s game is sure to be another tense occasion, in a fixture Reds supporters dread losing more than almost any other.

Liverpool haven’t scored a home league goal against their rivals since Daniel Sturridge netted in a 2-1 defeat in 2014/15 – surely goals and a win are both overdue!