Trent Alexander-Arnold and Jordan Henderson played 90 minutes as England beat Kosovo 5-3 on Tuesday night, with both coming through unscathed.

The Three Lions took on their 15-game-unbeaten opponents at St Mary’s, with three points expected in their quest for Euro 2020 qualification.

Gareth Southgate’s side duly obliged and it was good to see a strong Liverpool presence on show, on an entertaining night in Southampton.

Alexander-Arnold came in for Kieran Tripper at right-back, having been surprisingly left out of the weekend victory over Bulgaria.

Meanwhile, Henderson kept his place in the middle of the park, again occupying the more attack-minded role seen at Liverpool since the back end of last season.

Alex Oxlade-Chamberlain and Joe Gomez had to make do with a place on the substitutes’ bench – neither featured at all – as they continue to struggle for playing time this season. 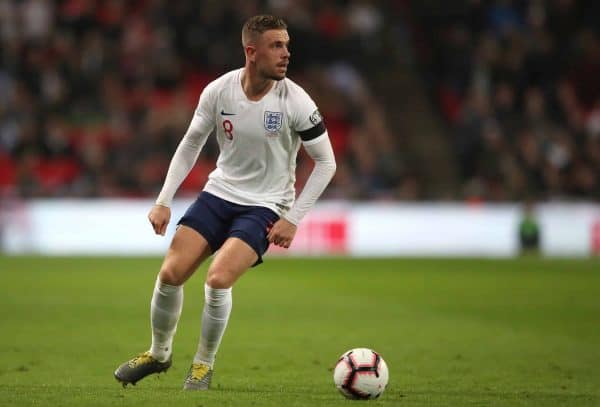 Mergim Vojvoda registered an unfortunate own goal and Jadon Sancho fired home twice before half-time, making it 5-1 at the break.

Berisha pulled a goal back and Vedat Muriqi buried a penalty after Man United‘s Harry Maguire recklessly gave away a penalty, making it 5-3 in the process.

Neither Alexander-Arnold or Henderson were at their most noticeable best, but equally, the pair played perfectly well on the night, as England secured the win.

Liverpool’s players will now return to Melwood in order to prepare for Saturday’s visit of Newcastle, as the Reds look to stay top of the Premier League table.

Alexander-Arnold and Henderson are both expected to start at Anfield, but Gomez and Oxlade-Chamberlain could again be on the bench.