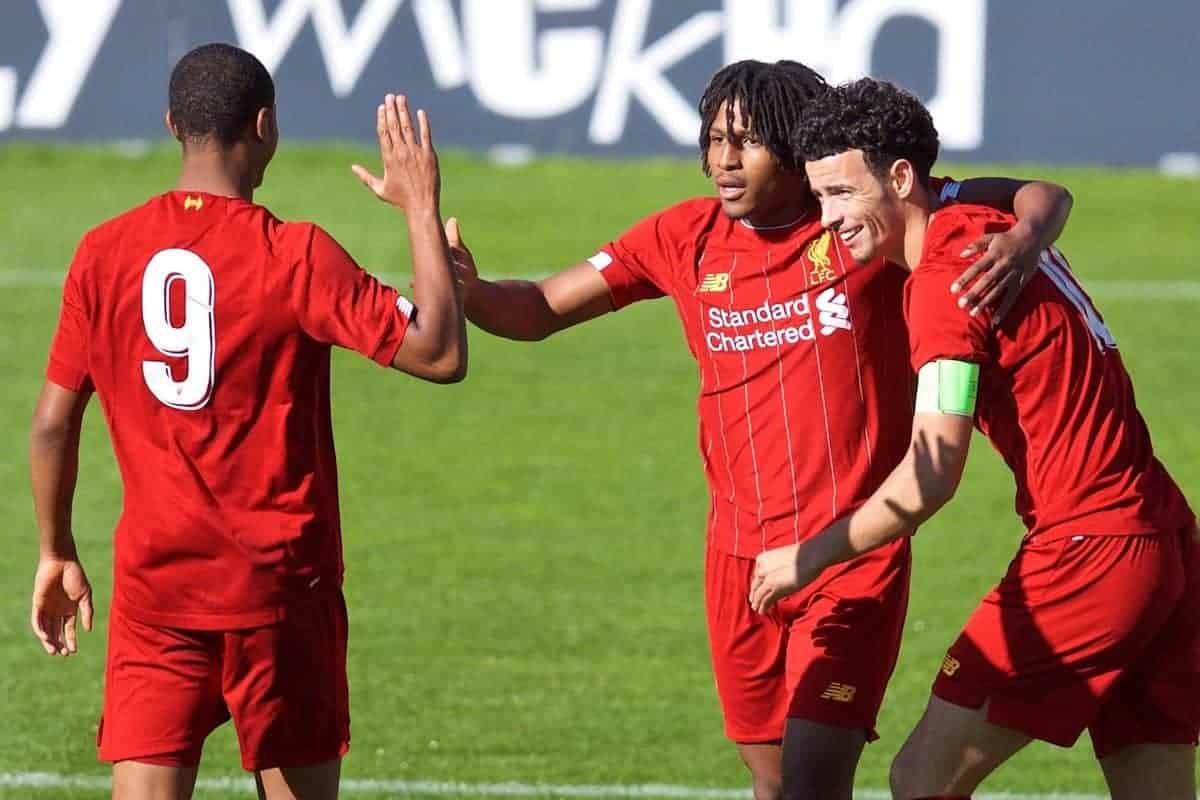 The Liverpool under-19s endured a rollercoaster clash with Salzburg in the UEFA Youth League, clawing back from 2-1 down to win 4-2 late on in St Helens.

Ahead of the first team’s Anfield clash, Barry Lewtas‘ U19s hosted their Salzburg counterparts, with the academy boss making three changes from the 1-1 draw at Napoli last time out.

In came Jakub Ojrzynski, Sepp van den Berg and Rhian Brewster, with the latter pair among five starters who featured for the senior side against MK Dons a week earlier.

Liverpool got off to the perfect start against a meek Salzburg, with a swift break allowing Brewster to lay it off to Yasser Larouci, who hammered home with his left for a fifth-minute lead.

But a defence-splitting pass and a major misjudgement from the debuting Ojrzynski allowed the visitors to grab an equaliser just after the 20-minute mark, Karim Adeyemi side-stepping the Pole and side-footing home from 25 yards.

As the Reds’ new elite development coach Vitor Matos watched on, a frenetic end to the first half played out.

Curtis Jones twice went close, Morgan Boyes headed wide from a corner and Brewster struck the post, while a shaky Ojrzynski was twice left flat-footed by Alexander Prass, but somehow the interval arrived at 1-1.

The second half began at a significantly slower pace, with both sides opting for a more methodical approach and the ball getting caught up in midfield more regularly.

Salzburg’s efforts often came from range, and Ojrzynski produced a brilliant fingertip save to deny Luka Sucic’s powerful shot, as the 16-year-old began to find confidence.

But a corner soon after saw the story of Van den Berg’s first three months on Merseyside continue to play out, as the Dutchman was caught sleeping in the penalty area and David Affengruber was able to head Salzburg in front.

The young Reds’ experience began to show as the game wore on, and a swift burst from Larouci down the left led to a deep cross dug out, with Neco Williams on hand to level with a replica of Ki-Jana Hoever‘s header from Stadium MK.

That came after a switch to a 4-3-3 formation from Lewtas—whose persistence with a 3-4-3 remains confusing—and it allowed Jones to dominate in a central role, which led to a stunning strike from the captain, placed low into the bottom corner from range.

It came in Jones’ 10th appearance for the academy this season, and with six goals and five assists in that period the 18-year-old is putting the numbers on the board that should lead to further first-team opportunities.

His goal wasn’t to be the last, though, as a late run from Harvey Elliott saw him brought down in the penalty area, and up stepped Brewster to secure a valuable win for Liverpool.