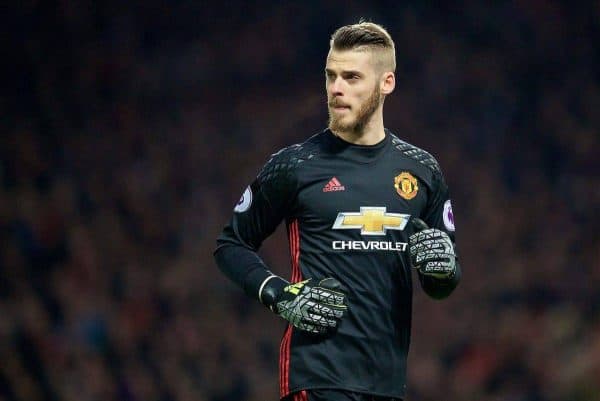 Man United may be without goalkeeper David de Gea for Liverpool’s trip to Old Trafford this weekend, after he pulled up injured playing for Spain.

The stopper has been a key figure for the Red Devils over the last few seasons, often helping them achieve league wins and table finishes they certainly wouldn’t have managed without his services.

Even if he has suffered a downturn in form over the last year or so, he remains one of the more adept goalkeepers in the Premier League and his absence would be a massive one for Ole Gunnar Solskjaer.

Spanish media report he suffered an abductor injury in the first half and received treatment at the break before continuing, but then came off around the hour mark, replaced by Chelsea‘s Kepa.

While missing De Gea would be a huge blow for United, and potentially a boost for Liverpool, Solskjaer has better news from others who were struggling with injury before the international break.

Anthony Martial is back in training after missing several matches through injury, while Aaron Wan Bissaka is also available after illness.

The forward is still not completely sure of a place in the squad, but given United’s woeful form and their lack of available forwards, he could be rushed back for a bench spot at least.

Paul Pogba, Luke Shaw and Victor Lindelof all missed the final Premier League game before the international break—a dismal 1-0 loss against Newcastle United—but could each be in contention after the two-week break.

On the flip side of those potential recoveries, Mason Greenwood withdrew from England U21 duty through an apparent injury, while right-back Diogo Dalot left the game against Newcastle with an injury of his own.

Liverpool have been boosted in recent days on the fitness front, with the news that, firstly, goalkeeper Alisson was back in full training alongside Mo Salah, while Joel Matip and Alex Oxlade-Chamberlain also joined in on Tuesday.