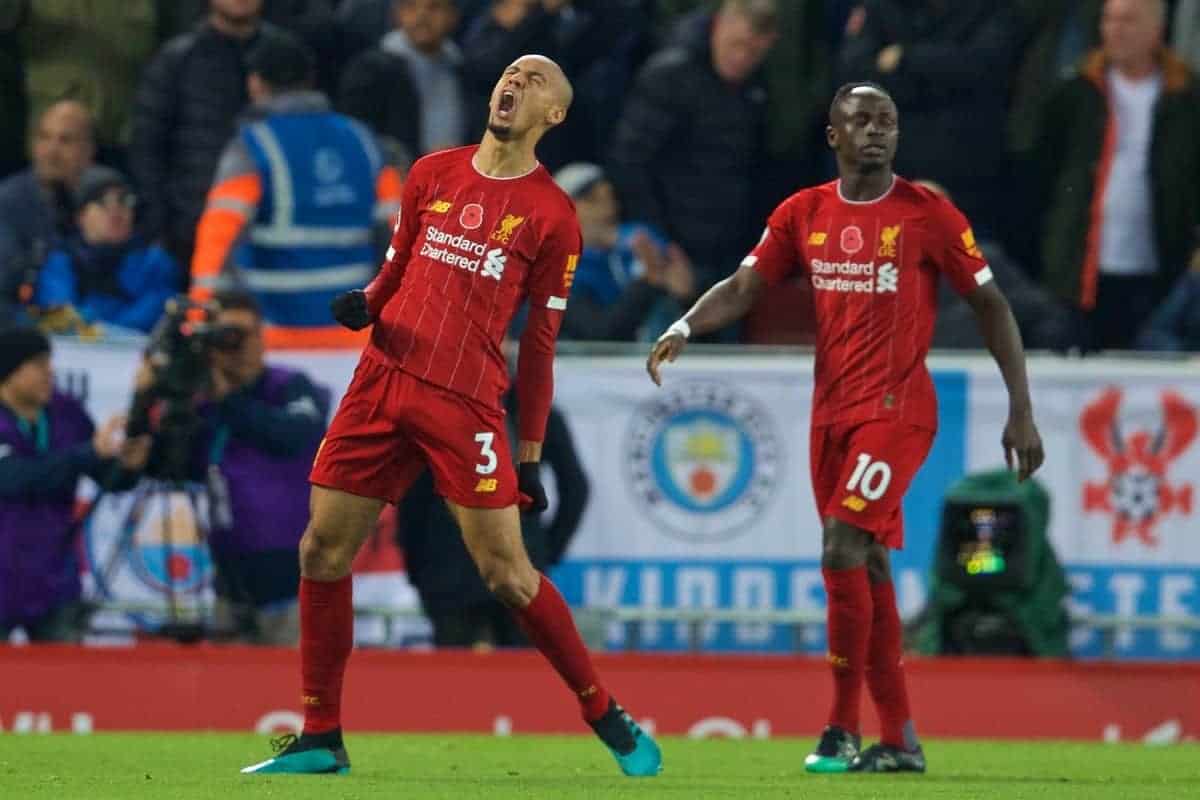 There was joy in abundance for Liverpool’s players after a “massive” 3-1 win over Man City maintained their stronghold at the Premier League summit.

Pep Guardiola’s side made their way to Anfield intent on reducing the six-point deficit Liverpool held over them, only to leave Merseyside further adrift.

While the visitors started brightly in possession, a stunning effort from Fabinho saw Liverpool strike where it mattered most before Mohamed Salah doubled the lead moments later after finishing off an exemplary passage of play between the full-backs.

The Reds kept their foot on the accelerator and would add a third after the breakthrough Sadio Mane to ensure their dominance was reflected on the scoreboard.

Bernardo Silva would peg one back late on to deny Liverpool another clean sheet, but the three points remained safely on Merseyside and Klopp’s men now move eight points clear at the Premier League summit.

For Andy Robertson, when speaking to LFCTV after the final whistle, it was a “massive result” and one which the Reds were forced to “dig deep” for as City looked to relinquish their shackles late in the piece.

Liverpool’s No. 26, who laid on the assist for Salah’s goal, also touched on VAR restricting celebrations for the opening goal and the state of the table:

“Massive [result] for us. Both of us were in a league of our own last year and it looks as though there’s going to be a few others sniffing about this year.

“But I still believe that if you finish above Man City then I think you’ll get the title so it’s a massive one for us and it’s just another one to tick off as there’s still a long long way to go.

“I think in these games the first goal is always crucial and luckily Fabinho’s hit an absolute rocket but because of VAR we couldn’t quite celebrate it properly because we didn’t know what was going on.

“We knew at half-time to stay calm and composed because the next goal was crucial because if Man City scored then we know how good they can be, but luckily Sadio got at the end of a delightful cross by Hendo.

“We had to dig deep. We were tired and they threw everything at us, it’s easier [for them] when they have nothing to lose so we really had to dig deep and I thought we defended really well.

“It’s two teams full of winners and that’s why nobody was happy with a draw, but it was all about trying to get our noses in front and trying to keep causing them problems because we knew we could.” 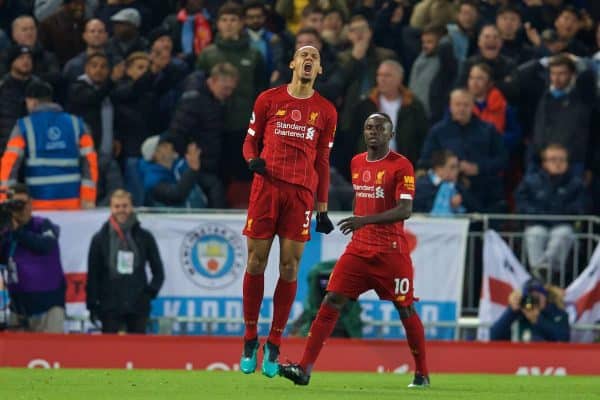 Gini Wijnaldum, meanwhile, was keeping level headed about Liverpool’s current position having experienced how quickly the Premier League can throw a spanner in the works.

But the Dutchman was eager to ensure the Reds “enjoy the moment” after all their hard work to earn themselves the position they now find themselves in:

“It’s always good if you have a gap between the teams behind you but you can see last season that it means nothing because if you don’t perform and get the results you need to get they can close the gap really quick.

“We just have to focus game by game and give our all and at the end of the season we will see where we will end [up] but we just have to enjoy the moment we’re in now because we worked hard for it.”

After the final whistle, the squad took to Instagram to voice their sheer joy at clinching their 11th win of the league campaign.

Alex Oxlade-Chamberlain needed just one word to convey his thoughts on the result, “BIG”, while for Trent Alexander-Arnold it was a case of “you love to see it”:

The result means a number of celebrations ensued throughout and for Robertson, Roberto Firmino was one to avoid at such moments due to his love for a karate kick which at times is a little too close for comfort.

Mane similarly pointed to Firmino’s moves, and the man himself commended his fellow teammates for the result:

What a game! What an atmosphere, thank you Anfield. We are unique ???? #ynwa

And for Fabinho and Jordan Henderson it was a “big win going into the international break:”

Massive win. What a performance, lads! We keep going! ????

The result at Anfield ensures the Reds head into the final international break of the calendar year on a high and in prime position once domestic action restarts.

A return which will see Klopp’s chargers travel to Crystal Palace on November 23 in search of their 12th win of the league campaign.