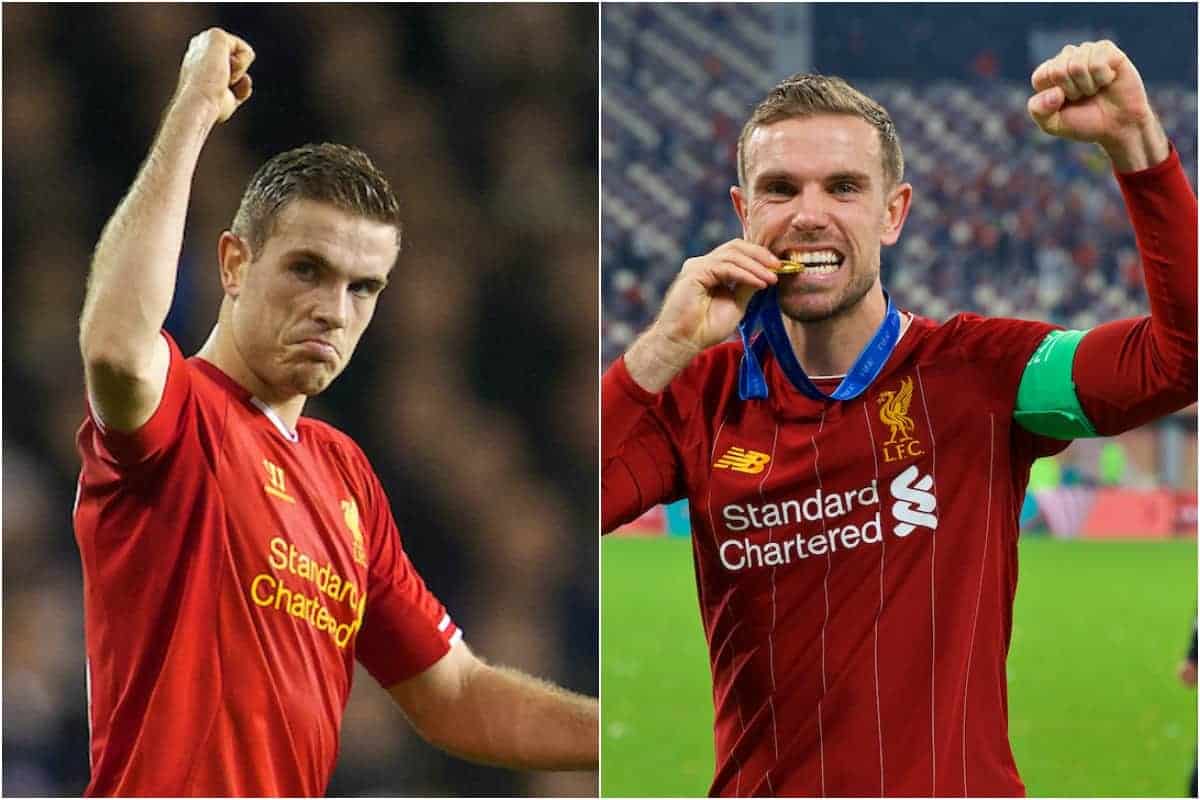 Jordan Henderson is the only Liverpool player left from the squad that won 5-0 at Spurs six years ago, and his importance has never been greater.

Six years and one month ago, Liverpool went to North London and absolutely thrashed Tottenham Hotspur 5-0.

It was such a demolition job that if Daniel Levy had hired that Brendan Rodgers team they’d probably have dismantled White Hart Lane far more quickly than the builders managed. I’m pretty sure Jon Flanagan could’ve erected their new stadium quicker too judging by the way he celebrated his goal.

With Steven Gerrard ruled out through injury, Luis Suarez stood in as skipper and the rampant Reds ended a run of six straight away defeats at the Lane by handing Spurs their biggest home reverse for 16 years. It was also Liverpool’s record win there and meant Tottenham boss Andre Villas-Boas had a date with the Spanish archer afterwards.

A couple of names there make you shudder, right? Even so that 5-0 win was the launchpad for Liverpool’s ultimately doomed title-challenge, but I want to focus on some extracts the newspapers wrote about Jordan Henderson – who at 23 was a year younger than Naby Keita is now – afterwards.

The Times: “If he maintains this outstanding level of performance then Steven Gerrard may not be missed too much over the next few weeks. Such form would also give Henderson a great chance of joining his team-mate in England’s World Cup squad.”

The Guardian: “Spurs were tormented by Jordan Henderson through the centre.”

Daily Telegraph: “Henderson – ‘a beautiful boy to train,’ his boss said – is a prime example of a footballer inspired to fulfil his potential by good coaching and man management. Gone was the tentative, floaty Henderson of his early years at Anfield. His place was taken by a quick-thinking, decisive, authoritative midfielder who wants to shape games and thread incisive passes.”

For me, that was Jordan Henderson‘s best performance in a Liverpool shirt during the early days of his career. It was a display that convinced me that Kenny Dalglish had indeed identified and signed a diamond from Sunderland in 2011, that Henderson had the attributes to be a big player for the Reds.

Henderson scored one and was involved in two other goals that day. He was absolutely everywhere on the pitch and it was obvious that the key to getting the best out of him was playing him in a more advanced central midfield role.

While Kenny may have brought Hendo to Anfield, playing him in a wide midfield role did him few favours. He struggled in a number of games and got plenty of stick for it. Some of the doubters will never be shaken off.

From that Spurs game onwards he was in superb form, an integral cog in Rodgers’ team that built up enough momentum to seemingly become champions until Chelsea‘s win at Anfield was followed by Palace – two games Henderson was suspended for following a late red card, for an impetuous challenge after mis-controlling the ball against Manchester City.

He’s been asked before, more than once, if that suspension was a crucial turning point in Liverpool’s failure to see out their title-challenge. We’ll never know for certain, as Henderson has said himself, but I’ll forever believe that it was a factor.

Six years on, Henderson is the only player from the 18-man squad that won at Spurs to still be a Liverpool player. He lifted the European Cup last June after another win against Tottenham, this time in Madrid, and earlier this season struck an important left-footed Anfield equaliser against them before Mo Salah‘s late winner from the penalty spot.

Spurs, don’t forget, were a Harry Kane goal up and had hit the crossbar through Son Heung-min early in the second half before that Henderson goal (his 26th for LFC and meant he has scored in nine consecutive seasons) shifted the momentum back towards the Reds.

Should Liverpool’s Premier League campaign pan out how we’re all hoping then I’ll see that as one of the most important wins of the season as it came on the back of the 1-1 draw at Manchester United, but I’ll also view Henderson’s form in the absence of Fabinho as absolutely critical.

I’ll be honest, when Fabinho limped off against Napoli in November I thought we were in trouble. He was bossing midfields at the time and Henderson was playing extremely well further forward, but without the Brazilian I thought two games in particular – Salzburg and Leicester away – were going to be hugely difficult.

Lose both and Liverpool would be out the Champions League and under pressure in the Premier League. I needn’t have worried.The bigger the game, the better this Liverpool team seem to play. They won both without conceding against two free-scoring sides.

Despite not playing as a ‘6’ all season, Henderson slotted back into the role like a Mackem Makélélé. He has been absolutely magnificent in Fabinho‘s absence and even had a superb game at centre-half when asked to play there in the FIFA Club World Cup semi-final against Monterrey.

He was my man-of-the-match in both the FIFA Club World Cup final against Flamengo and our most recent Premier League game at home to Sheffield United, and if 29-year-old Henderson turns in another captain’s display and gets control of the midfield against Tottenham this weekend I fully expect Liverpool to go there and win.

Just like they did six years and one month ago at White Hart Lane on a day when Jordan Henderson began to develop into the player he is now.