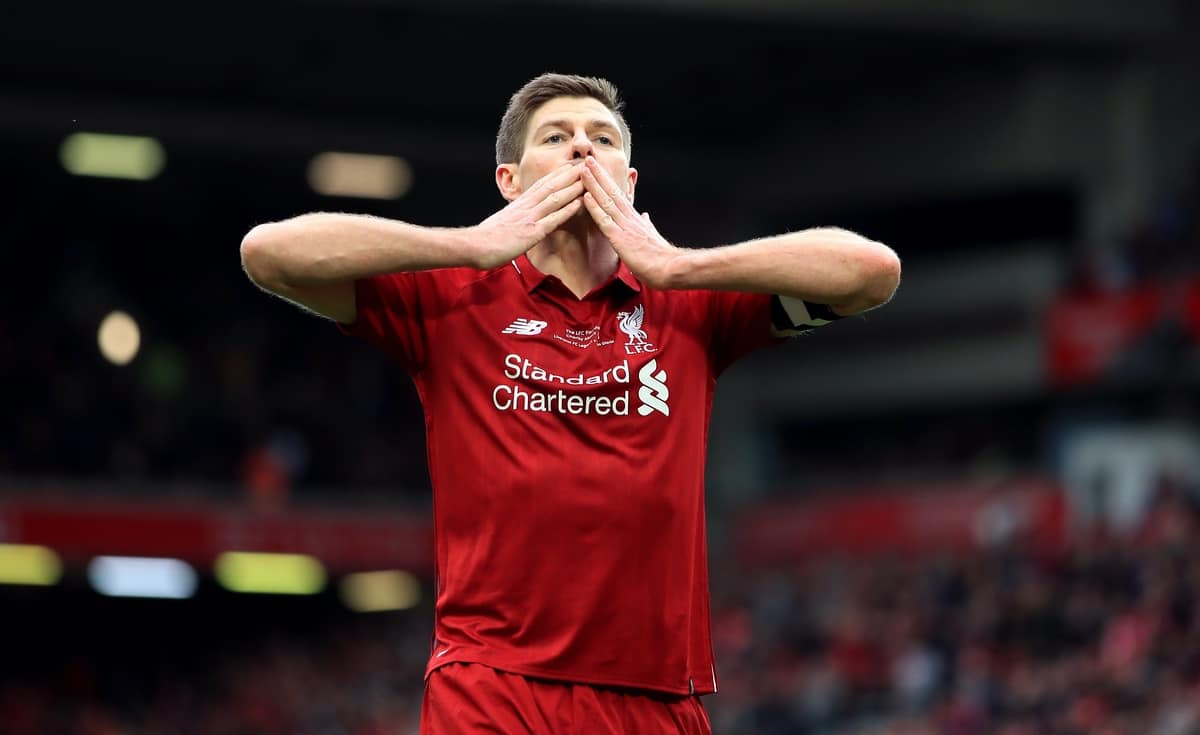 Steven Gerrard admits his lack of experience was a concern before taking charge of Rangers—and the same reason could prompt him to turn down an offer from Liverpool.

The 39-year-old also accepted he will continue to make mistakes at Ibrox and will potentially have to manage elsewhere before being deemed suitable for his dream role at Anfield.

Jurgen Klopp recently tipped the former Liverpool skipper as his natural successor as Reds boss and the pair both signed contract extensions until 2024 on the same day.

But Gerrard is not making any assumptions about his career path.

The 114-time capped England midfielder had to think carefully about taking the Ibrox role in May 2018 after one season in charge of Liverpool Under-18s.

Speaking to long-time team-mate Jamie Carragher on the Greatest Game podcast, Gerrard said of his inexperience: “It was a concern.

“And I think everyone knew—the media, everyone at Rangers and me going in—that there is going to have to be an element of learning on the job. Even now I’m going to make mistakes, I will still make mistakes.

“But you can’t fast-forward experience, you can’t shortcut it, it just comes in time. My concern when the Rangers offer came was if I stay at Liverpool maybe that might not come and maybe that is the one that I need.

“Maybe that is made for me, I did get a real nice feeling for it, but yes it did come too soon.”

Gerrard has since led Rangers into the Europa League group stages twice with a last-32 clash with Braga to come and his side are neck and neck with Celtic in the Ladbrokes Premiership.

But he is still looking to end Rangers’ long wait for a major trophy and knows he has plenty to prove.

“I wouldn’t take the Liverpool job just because of what Jurgen said,” he said.

“I am mature enough to know that I have to be ready for the Liverpool job.

“Just by Jurgen saying it, it’s very flattering because of who he is, and there is a lot of people out there that naturally think that if Jurgen goes in a year or two’s time, I am next.

“I don’t and there’s a couple of reasons behind it.

“If I got offered it, it’s a completely different ball game because you are getting offered the Liverpool job. But sitting here where I am now, doing what I am doing, I am fine. I am calm and happy.

“If I stay at Rangers for another two, three or four years I am OK—it means I am doing something right and happy. I am in no rush to try and jump, I am not looking over the fence at anything. I am proper content.

“If Jurgen stays at Liverpool for another four or five years, brilliant.

“If Liverpool decide there’s another guy that is more suited to the job after Jurgen, that is a better candidate than me at that time then fine, no problem.

“For me, it’s crack on and be as good as you can if and when it ever comes. If that comes in two years or 10 years, no problem.

“I won’t manage for 20, 30 years. I want to experience managing at the top in the Premier League at some point.

“Obviously the perfect situation would be for my team, for Liverpool, but I’m not daft enough to think I’m going to get it just because I was a good player for Liverpool Football Club.

“But my aim, dream, would be to manage Liverpool Football Club. Of course it would, I’d be lying if I said it wasn’t.”