Adam Lallana now appears certain to leave Liverpool this summer, with news of Leicester City making a first enquiry to sign him.

The midfielder is out of contract at the end of 2019/20 and is a peripheral figure for Jurgen Klopp.

While up until now there had been no official line of whether or not he would be offered a new deal or allowed to depart on a free, reports of the Foxes speaking to Lallana’s representatives can be taken as such.

This is because, while Lallana would have been free to speak to overseas clubs from January, his club’s permission is still needed to discuss terms with domestic rivals.

Sky Sports say the Reds have granted this allowance to talk to other clubs “after making it clear to him he will not be offered a new contract.”

Leicester are currently looking good for Champions League football next season and Lallana would bring an element of know-how at that level to the team, though his exposure to games in Europe over the last two-and-a-half years is minimal: no appearances this season, 104 minutes over three games last year and 150 minutes in two games during 17/18, an hour of which came in the final. 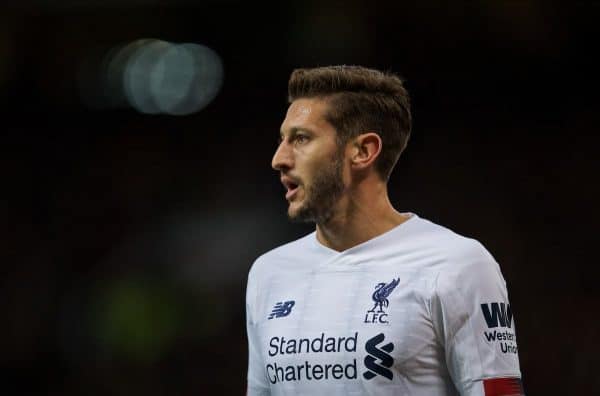 This season his impact has come largely in cup games or off the bench, with his sole Premier League goal coming at Old Trafford to help keep the Reds unbeaten, and his only assist coming at home to Wolves in December.

In league play he has featured for 30 minutes or more on just three occasions this term, making 19 appearances all told across all competitions.

He was, as Rich Jolly noted for This Is Anfield recently, one of the original components of the Jurgen Klopp rebuild, but injuries and inconsistencies have seen him left behind somewhat as the team continued to grow.

Leicester manager Brendan Rodgers is, of course, the man who brought Lallana to Anfield in the first place, back in 2014.

The two could rejoin forces for next year if their approach is successful, and although there are plenty of other clubs reportedly keen to sign Lallana, Leicester at present look to be at the highest level and could offer the No. 20 regular game time.