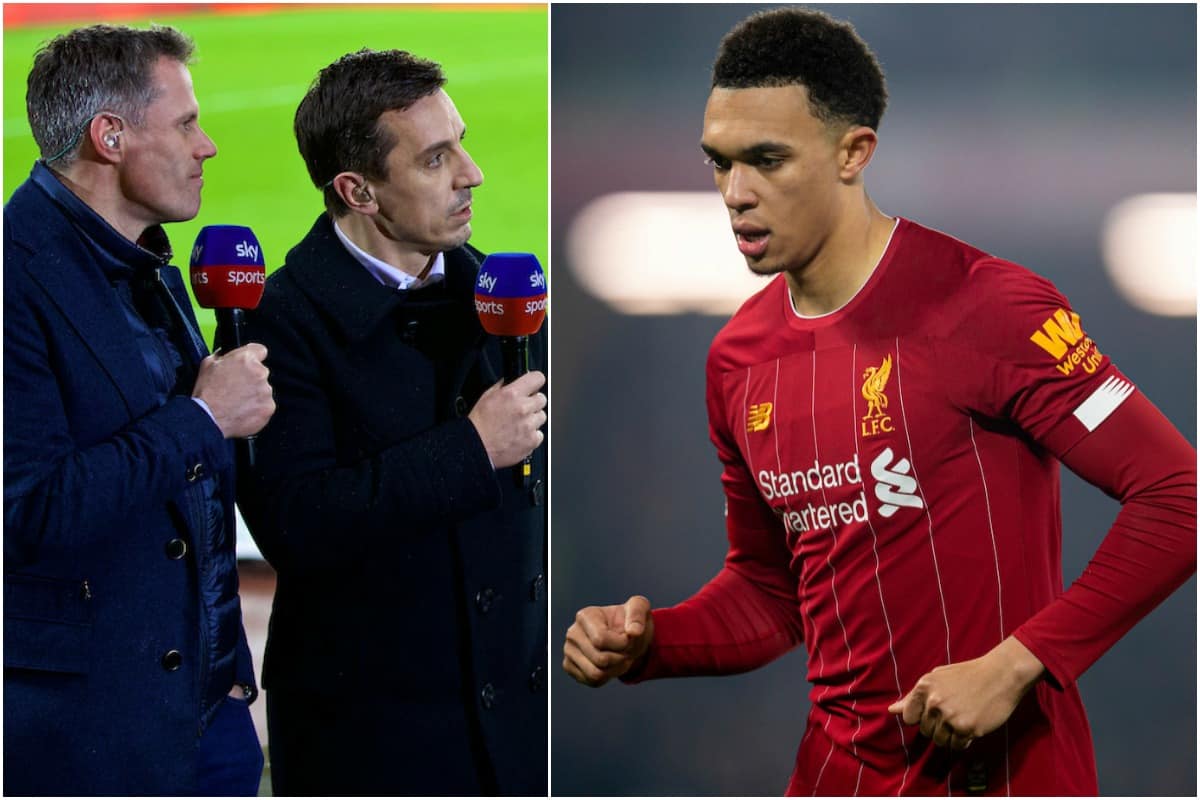 Trent Alexander-Arnold was a shining light in Liverpool’s 3-2 win over West Ham, earning him high praise from Jamie Carragher and Gary Neville.

The right-back has been instrumental for Jurgen Klopp’s side since entrenching himself in the first team since the 2017/18 season.

And while only 21-years-old, Alexander-Arnold has catapulted himself into the top echelon of players in his position while emulating the ability and talent of those who play further afield.

He was recently tipped as a future Ballon d’Or winner by legendary Brazilian right-back Cafu and continued to lay the groundwork in his burgeoning career by setting up both Gini Wijnaldum and Sadio Mane in the 3-2 comeback victory on Monday.

The assists took Alexander-Arnold’s total tally in the Premier League to 25, making him the third-youngest player to reach the quarter of a century mark behind only Cesc Fabregas and Wayne Rooney.

The poise and pinpoint manner of his deliveries has become a regular feature of his game and for Carragher, his unique skill set makes it so the Reds have a Kevin De Bruyne-esque presence in defence as their “best playmaker.”

“What makes him special is it is like having De Bruyne at right-back, like a midfielder at right-back,” Carragher told Sky Sports.

“People talk about his defending, but what he is doing – like Beckham at wing-back under Hoddle because of his quality – Alexander-Arnold is like a wing-back with the positions he plays.”

“That game was about corners of West Ham and crosses of Alexander-Arnold,” Carragher added. “That was the only threat coming from Liverpool.

“Think of the best in his position, think of Cafu or Dani Alves, they were world-class, bombing down line, getting crosses in, but he is running the game for his team. The best playmaker is a right-back from West Derby.”

And the praise did not end there as Neville credited the England international’s precision as “out of this world” having been able to consistently pick out Liverpool’s front three, who are far removed from the typical “big strikers.”

“What staggers me is they don’t have two big strikers to hit with loads of headers, but Mane and Salah score headers because the quality is that good,” Neville explained.

Having proved key to Liverpool’s latest victory, which moves the Reds to within 12 points of the title, he was later asked if he looks for a specific teammate when delivering the ball or if it is a case of directing it to the most dangerous area.

“A bit of both. I think sometimes when you get the ball and you’re thinking about crossing it then you have to look in and see if anyone’s in the box and see where the runs are going to be made, and then it’s about hitting areas really, saying to the attackers: ‘Go and attack it,” he said.

“That’s what I tried to do today, I tried to put balls into the box and when you’re getting space out wide and you’ve got a little bit of time it’s always good to get the ball out of your feet and try to cross it.”

After the game, Klopp was quick to note that “we are past the moment where we treat him like a young boy. He is just a proper member of the squad,” and that tells you all you need to know about the career trajectory of Alexander-Arnold.