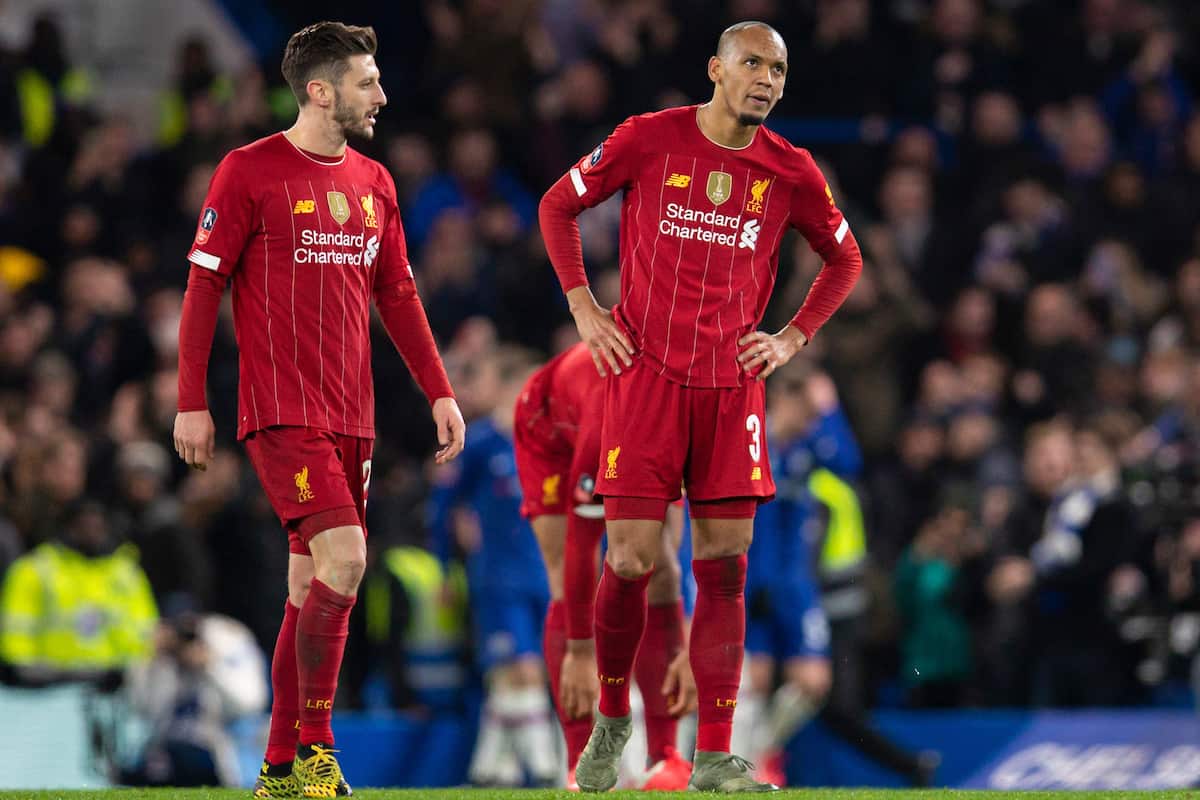 Liverpool’s mid-season malaise continued with their third loss in the last four games, exiting the FA Cup at the fifth-round stage after losing 2-0 at Chelsea.

Perhaps with the setback at Watford in his mind, Jurgen Klopp named a strong side at Stamford Bridge despite making seven changes, with Virgil van Dijk, Andy Robertson, Fabinho and Sadio Mane all retained.

The Reds started brightly, capitalising on a shakiness in the Chelsea defence, and Mane was particularly bright as he intertwined with Takumi Minamino and the overlapping Curtis Jones.

But sloppiness from Fabinho, failing to pick up a pass from Joe Gomez, saw the ball fall for Willian, and after making a strong save seconds before, Adrian allowed the Brazilian’s drive to slip out of his fingers and into the back of the net.

A triple-save at the other end saw Kepa deny Mane, Origi and Jones, which proved to be Liverpool’s best chance of the half, though Mane and Minamino could have converted with further opportunities only to take too long to pull the trigger.

The first-half performance followed a similar pattern to the recent run of games, with simple passes misplaced and Chelsea offering more bite in one-on-one duels and battling for second balls.

Chelsea suffered their second early injury blow minutes into the second half, with the goalscorer Willian joining Mateo Kovacic on the casualties list to force Frank Lampard into a series of formational changes.

Liverpool certainly improved, and most of their openings came from high balls into the box with Mane latching onto them, but the game was calling for a change from the bench, with Origi particularly lacking in attack.

The hosts had their second goal before Klopp had made the timely intervention, and it came after Jones turned into danger, with Ross Barkley picking up the ball and driving 60 yards towards goal, unimpeded as Fabinho struggled to keep up, before blasting it past Adrian.

Origi was eventually hooked, with James Milner, Roberto Firmino and later Mohamed Salah coming on, with Liverpool shifting to a 4-2-3-1 in a desperate attempt to recover, but it came too late.

The Reds have now exited the FA Cup before the quarter-final stage for the fifth successive season, and they have now lost three of their last four games.