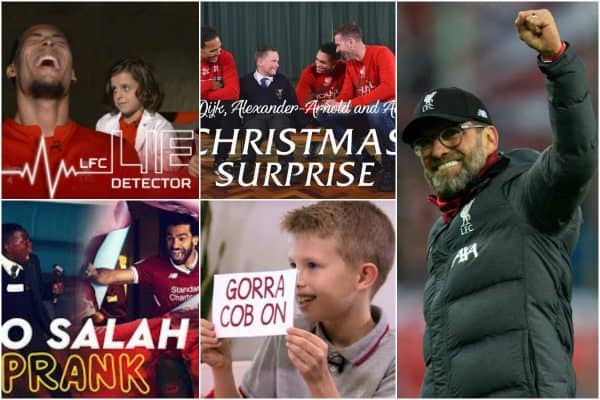 16 Liverpool videos for Kop Kids: From pranks to surprises and lots of laughs

With the regularly scheduled entertainment Jurgen Klopp’s team provide on hold for now, we’ve all had to find other means to get our Liverpool fix. And it is no different for the Kop Kids among us.

With time spent indoors increasing as quarantine and self-isolation measures continue, the need for a constant stream of entertainment, and forms related to Liverpool, is ever-present.

We previously put together a list of 10 films, documentaries and series all related to football or Liverpool, and now we have put together one for the kids.

It collates a number of kid-friendly videos created and shared by the club over the years, from pranks and surprises at local schools to members of the club’s academy interviewing Jurgen Klopp and his players.

There are over 15 videos provided which will be sure to keep the young ones, and even adults, occupied for quite some time.

Ox is on the hot-seat and talks rumours, singing, pace and Robbo as Cameron and Layton ask all the questions.

Big Virgil is up next and has a go at Frozen’s ‘Let it Go’, is questioned on if he has ever lied to Klopp and if he wears pyjamas!

The young Red is the one in the spotlight this time, and talks skipping school, singing in the shower and FIFA.

Robbo is the final participant and is posed questions on his love for Celtic and Liverpool and he also gives us a look at his singing ability!

From Photobombing to Pranks on Unsuspecting Fans…

Bobby, Virg and Trent surprised 20 local school kids during a fake photo op back in 2018, and the wave of emotions is brilliant!

From commentating on one of his goals to having the man himself burst through a wall a moment later – this one will leave a giant smile on your face.

Henderson and Lucas in disguise

This one takes us all the way back to 2015, when ex-Red Lucas Leiva and Jordan Henderson teamed up to go undercover in a Liverpool club store to prank shop customers – a must watch!

The Kids Interview the Adults…

Gini gets grilled by Isaac

Months after Liverpool’s No. 5 arrived in 2016, Gini makes a milkshake with the Kop Kids’ Isaac and talks about his famous smile, his career and playing at Anfield for the first time.

It was an early lesson into Scouse slang for the boss as he was quizzed on a number of phrases, from ‘boss tha’ to ‘gorra cob on’.

Nothing was off limited as Liverpool’s under-8s sat down with the Dutchman, from who is in his phonebook to if he picks his nose!

Steven Gerrard and a 10-year-old Red

This one dates back to 2013, but it is still a cracker as Finn has a chat with Stevie and receives some great advice.

It may be a while until Santa comes, but it’s never too early to get in the spirit and that’s exactly what this trio did back in 2018!

The following year it was Van Dijk, Trent and Adrian who surprised both Liverpool and Everton fans, where some hilarious conversations followed!

The now famous words uttered by Lucas all started here all those years ago as both he and Hendo took part in a very interesting fairground challenge!

A cup of tea with Suarez

He’s not been with Liverpool for over five years but that shouldn’t stop you taking a walk down memory lane with this Q&A on his family, life on Merseyside and his goal celebrations, at the time.

It’s another ex-Red in Philippe Coutinho but it’s still worth your time as he and Gini go head to head with 30 Liverpool U9s. It’s chaotic to say the least, but it’s a game of footy nevertheless.