Marko Grujic is among the Liverpool contingent currently playing regular football, with his loan spell in Germany continuing in impressive recent fashion.

The Reds have three over in the Bundesliga and German second tier at present, with Taiwo Awoniyi at Mainz, Nat Phillips with Stuttgart and Grujic himself at Hertha Berlin.

The midfielder is probably the one with the biggest chance of having a Liverpool future, though he certainly impressed more last season than he has done overall in 2019/20.

Mitigating factors come into play, though, with plenty of upheaval at Hertha this term in the coaching department and since appointing Bruno Labbadia as the new boss during the coronavirus lockdown, Grujic has come back into favour in the centre of the park.

He scored at the weekend as Hertha drew 2-2 at Leipzig, and as he has said several times over, still harbours hopes of returning to form part of Jurgen Klopp‘s squad next season and beyond.

That potential scenario might be increased in likelihood now, given there could be fewer transfers made over the summer.

Grujic has now spoken to the club website about his new manager at Hertha, a potential return to Liverpool and the strange situation of playing behind closed doors—which the players at his parent club are soon to experience.

“It’s a bit strange when you play without fans,” he said. 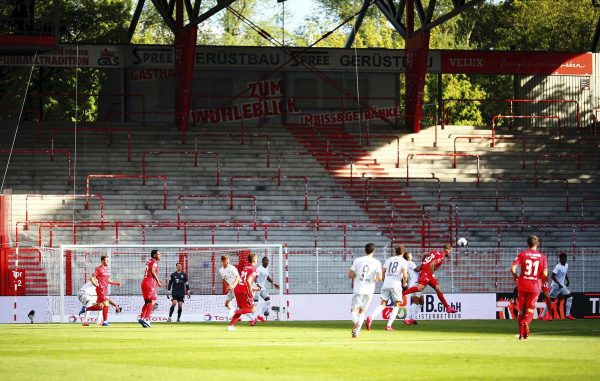 “That’s another thing, it feels kind of like a friendly game or a pre-season game, but it’s still far better than the situation like it was when we were just sitting at home doing exercises.

“The first one was of course the strangest, but then you get used to it. You can hear everything on the pitch, other coaches, other players, so it’s a bit weird.

“There is no energy from the fans after a good trick or a good pass or something, but it’s like that. It will be some time before things come back to normal so we have to adapt. We must adapt.”

On a possible return to Liverpool, Grujic continues to make it clear that it’s his priority.

He remains in touch with his staff contact at the club and is clearly keeping an eye on events unfolding at Anfield, with a title hopefully coming soon.

“I have mainly been in touch with Julian [Ward, loan partnerships and football partnerships manager] and he has talked to me all the time about training, about exercises that we did at home and now we always speak before and after the game on if we have to improve something.

“Of course that means a lot – I am still a Liverpool player and I want to be, one day, a regular Liverpool player. For me it’s still a dream to play for the club so we keep in touch.

“The guys have been unbelievable so far this season and they really deserve it [to win the Premier League]. Of course the fans have been waiting for this for so long so it would be special for the guys. Hopefully, soon we will see Hendo lifting the trophy.”

Grujic has played 14 times for Liverpool, but the 24-year-old is now approaching 50 appearances for Hertha—the first time he’ll have reached that milestone with any side in his career.

He was rated at anywhere up to £40 million in the transfer market a year ago, leading to suggestions he could be sold to raise big money for new signings, but Jurgen Klopp may opt to keep him at Anfield next term given the economic uncertainty around the game right now.