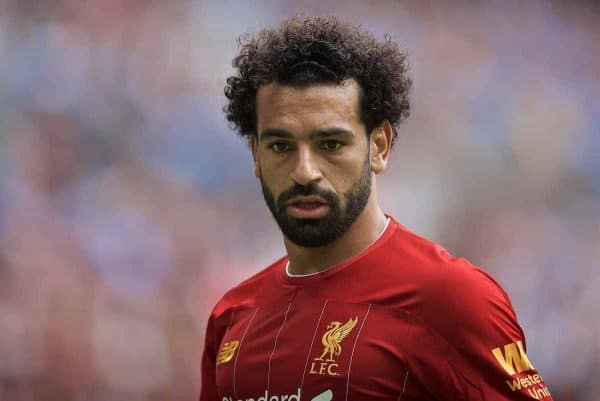 If his interactions on social media are anything to go by this week, we can all rest assured that Liverpool’s key forward Mohamed Salah is going absolutely nowhere any time soon.

As usual, even with all the uncertainty surrounding football and the financial state of play post-coronavirus, the transfer section in most media outlets is quickly cranking into gear.

We’ve already seen ludicrous claims of Liverpool gearing up for massive bids, the ongoing Timo Werner saga and plenty of other stories circulating—as well as, on the other side of the same coin, some journalists already suggesting the Reds’ activity will be limited.

But the rumours aren’t just out of the papers: Sky Sports are well known for their rumour-mongering and a more than slightly suspect conflict of interests when it comes to ‘reporting’ that transfers are possible.

This time, however, an attempt to generate discussion over whether a player should be sold has backfired rather beautifully, thanks to our Egyptian King.

Sky posted a picture on their Instagram page asking whether Salah should be sold on this summer, citing a changing role and the Reds needing a new forward—and our No. 11 simply replied with three laughing emojis.

The post was later deleted, but we grabbed a screenshot beforehand.

Clearly, Mo has little desire to depart Anfield right now, and why would he? He’s a regular starter, doesn’t have any direct competition, is in the best period of his career collectively and individually and has won multiple trophies already.

Life is good at Liverpool right now, and there’s little indication that other clubs think they can lure players away in the way that they have managed in the past.

The fallout didn’t stop there, seemingly, as Salah’s agent Ramy Abbas Issa tweeted out a series of ‘stats’ citing the forward as Liverpool’s top scorer year after year.

In 2017/2018 M. Salah was the team’s top scorer in both the Premier League, and the Champions League.

In 2018/2019 M. Salah was the team’s top scorer in both the Premier League, and the Champions League.

This season M. Salah is the team’s top scorer in both the Premier League, and the Champions League.

Since joining Liverpool FC in 2017, M. Salah has missed out on zero Golden Boots.

Presumably, this is just his agent backing up Salah and swiping at Sky’s attempt to generate transfer clicks, rather than anything deeper-lying about the forward needing to be more appreciated by the club.

He needs just another nine goals to clock up a century of strikes for the Reds already—we’re very clear on the fact that Salah has been a massive part of the team’s improvement from three or four years ago!