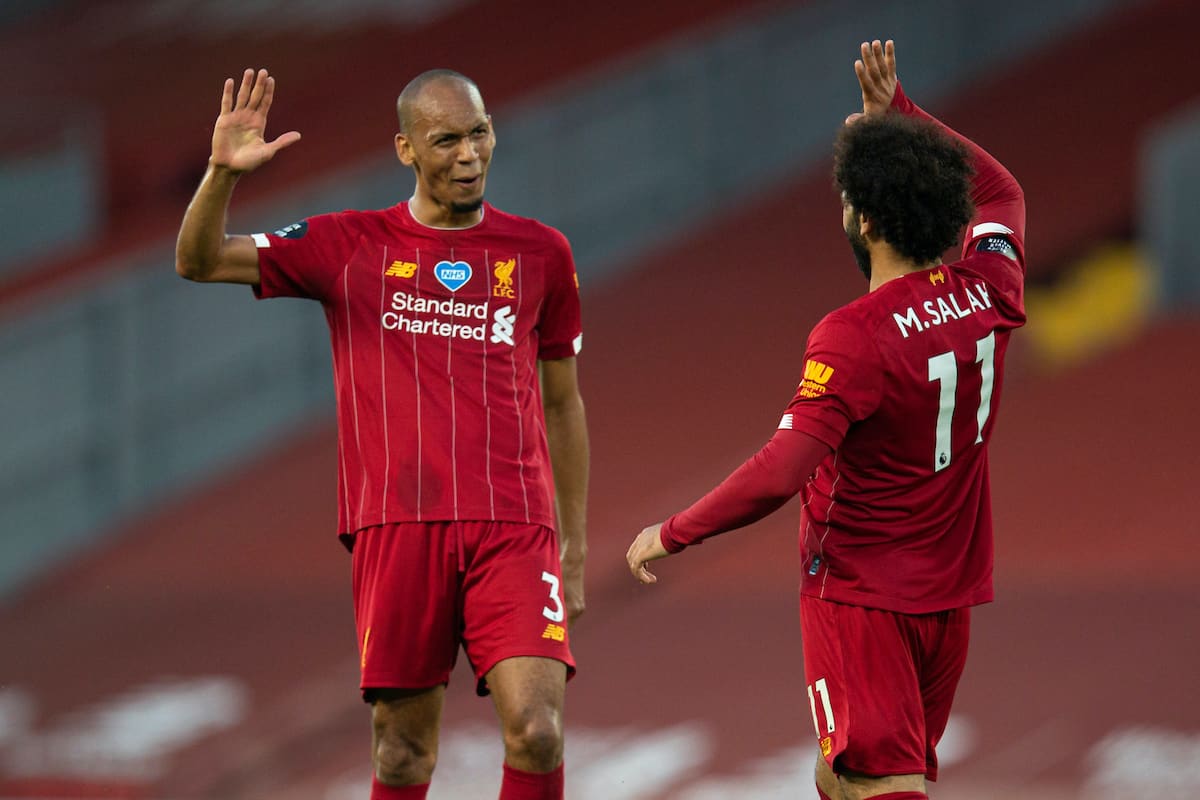 A number of Liverpool players were outstanding in their 4-0 win over Crystal Palace at Anfield, but Fabinho was the pick of the bunch.

The Reds weren’t at their best at Everton over the weekend, but they responded in hugely impressive fashion on Wednesday night.

Trent Alexander-Arnold whipped an outrageous free-kick past Wayne Hennessey to give Jurgen Klopp‘s men the lead, before Mohamed Salah made it 2-0 before half-time.

A Fabinho stunner put Liverpool out of sight after the interval, and then Sadio Mane put the icing on the cake with a slick finish.

This was vintage Liverpool, on an evening that showed why they deserve to be 23 points ahead of a formidable Man City outfit.

Here we compare our player ratings with those from the Liverpool Echo, the Mirror, The Redmen TV, FotMob and Sky Sports. 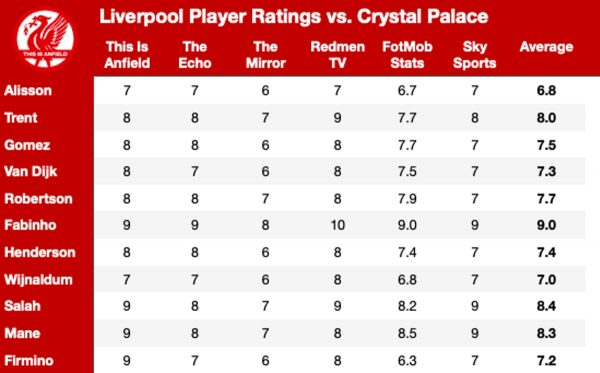 There was no debating who Liverpool’s star man was, with Fabinho (9.0) comfortably earning the highest average rating.

The Brazilian not only registered a brilliant goal and assist, but he was also immaculate in his more understated duties.

TIA’s Henry Jackson gave Fabinho the Man of the Match award, declaring that he looked “more like the dominant, world-class midfielder we saw before his injury last winter.”

Meanwhile, The Redmen TV gave him a 10-out-of-10 rating, describing his performance as “perfect.”

In second place was Salah (8.4), who came back into the side and found top form, also getting a goal and an assist.

Ian Doyle of the Echo felt the 28-year-old “provided width on the right”—something that was sorely lacking without him at Everton on Sunday.

The Mirror‘s Paul Brown hailed Salah for being “straight back among the goals,” as he took his tally for the season to 21 in all competitions.

Mane (8.3) was narrowly behind his African counterpart in third place, with Jackson claiming he showed why he is “one of the world’s leading attackers.”

Doyle was correct in stating that Andy Robertson‘s return to the side aided Mane, adding that he “revelled when bringing the ball inside.”

On a night when every outfield player did well, it was no great surprise to see the untroubled Alisson (6.8) at the bottom of the ratings.

He had almost nothing to do—Palace became the first visiting Premier League side not to touch the ball in the opposition’s penalty area since records began—so his gradings were no great surprise.

Liverpool are now on the verge of being crowned champions—if Man City fail to beat Chelsea on Thursday evening, history will be sealed after a truly incredible season.