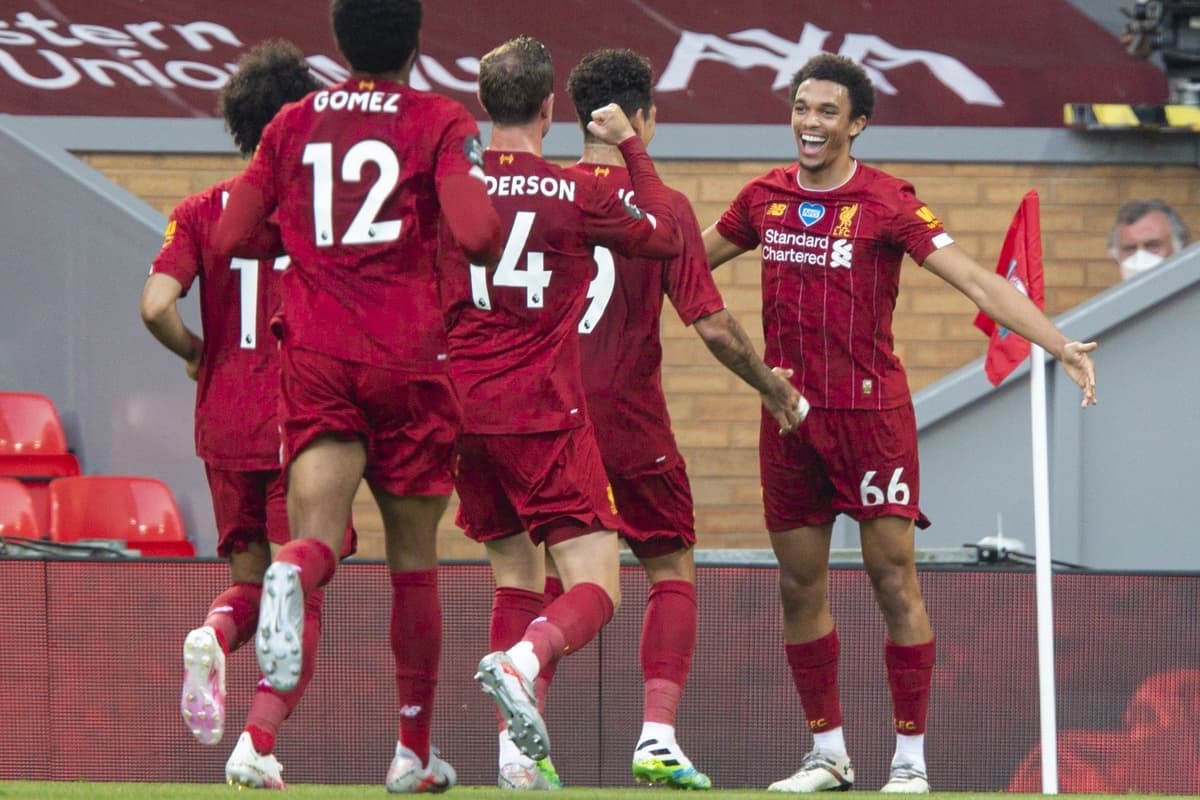 Liverpool were magnificent in their 4-0 win over Crystal Palace at Anfield, with the Reds now potentially being crowned Premier League champions before they play again.

After a match-saving performance at Everton at the weekend, Alisson was looking to continue his push for the Golden Glove award.

He did exactly that, on a night that saw him almost completely untroubled.

His distribution was typically strong – that’s about it.

Alexander-Arnold was far from his best on Sunday but he returned in force at a sweltering Anfield.

The 21-year-old curled home a stunning free-kick to set Liverpool on their way to victory, and his general quality on the ball was a delight.

Gomez started in place of the injured Joel Matip and he showed why he is Virgil van Dijk‘s undisputed first-choice centre-back partner.

Everything he did was oozing in class, from striding out with the ball to reading the game well, as he again showed what a special young defender he is.

Van Dijk returned in impeccable form over the weekend and that continued on Wednesday evening.

The Dutchman coasted through proceedings like an adult in an Under-12s game, defending when required and spraying passes of varying length.

He was also unfortunate not to win a penalty after being impeded by Gary Cahill.

Robertson returned to the starting lineup in what acted as a huge boost for Liverpool.

The Scot showed just how influential he is, adding another dimension to his team’s play and dovetailing beautifully with Sadio Mane.

His energy was relentless, his passing was crisp, and while Alexander-Arnold will earn more headlines, he was arguably just as good.

The Brazilian once again occupied the No.6 role in front of the defence and he was Liverpool’s best player.

His delightful assist for Mohamed Salah‘s goal was an eye-catching moment, but his thunderous 30-yard strike was even better, putting Liverpool 3-0 up.

This was more like the dominant, world-class midfielder we saw before his injury last winter.

Henderson is within touching distance of becoming the first Reds player to lift the Premier League trophy, and he put in an assured showing against a helpless Palace side.

The skipper volleyed over early on when he should have done better, and was also denied by the post soon after, but his all-round game was impressive.

There was nothing spectacular about him, but he was brimming with industry and leadership.

Naby Keita was Liverpool’s best player against Everton, so it was something of a surprise to see Wijnaldum come in for him.

The 29-year-old justified his place, though, knitting things together intricately in the middle of the park, in his trademark understated manner.

Wijnaldum should have scored in the first half, perhaps even twice, but the positives comfortably outweighed the negatives.

Salah’s return was a major positive for Jurgen Klopp, as the Reds superstar looked to come flying out of the traps at Anfield.

It took a little time for his touch to return early on, with the odd attempted pass failing to find teammate, but he began to purr soon after.

He took his goal brilliantly, making it look ridiculously easy, while his assist for Sadio Mane‘s goal was perfect in its execution.

Mane was one of Liverpool’s better players at the weekend and he was a joy to watch against Palace, showing why he is now one of the world’s leading attackers.

The Senegalese was on it from minute one, with one delightful back-heel to Roberto Firmino particularly good, and he had the beating of Joel Ward all night.

Quite simply, a world-class footballer at the peak of his powers – took his goal ruthlessly.

Firmino was hoping to wreak some havoc against the team he scored the winner against back in November – that proved to be the case.

Like Mane, it was clear straight away that the Brazilian was in the mood, with some of his touches out of this world.

Involved in Mane’s goal and generally thrilling to watch.

Slotted in well and showed some neat footwork.

A Premier League debut, and a good one at that. Almost scored, but ex-Liverpool man Mamadou Sakho denied him, and fired straight at Wayne Hennessey in the dying seconds.

Fairly unnoticed, but more minutes under his belt.

Not enough time to make an impact.

Another brief cameo for the prodigious teenager.

Some supporters were left frustrated with Liverpool’s performance at Everton, with Klopp not completely free from criticism.

It was an overreaction, though, and the manager got a fantastic display from the Reds on Wednesday, as they showed why they are the world’s best club side.

Klopp picked his ‘best’ XI and it paid off handsomely – he is now so, so close to truly cementing his legendary status at Anfield.

He’s put us back on our perch.