When Liverpool successfully climbed the mountain and emerged victorious over Barcelona, ‘Imagine’ filtered through Anfield’s speaker system and an outpouring of emotion followed.

As Jurgen Klopp had put it, the task was “pretty impossible but if anybody can do it, we can.”

The night that was May 7, 2019, has been well documented. From Divock Origi’s opener to Trent Alexander-Arnold’s cheeky corner and the fierce determination present from the first minute to the very last.

But what happened on the field was, in part, possible because of the Anfield faithful. The feral, boisterous and unrelenting red wall who, like Klopp’s men, had nothing to lose on a night where so many had already written us off – Barcelona included.

And so, when the final whistle blew, the scenes at Anfield would have reflected houses and pubs across the world with faces full of shock, tears, joy and everything in-between.

Then came the moment which has been enshrined in the club’s history, a Liverpool squad assembling in front of the Kop as everyone in attendance belted out the club’s anthem ‘You’ll Never Walk Alone’. 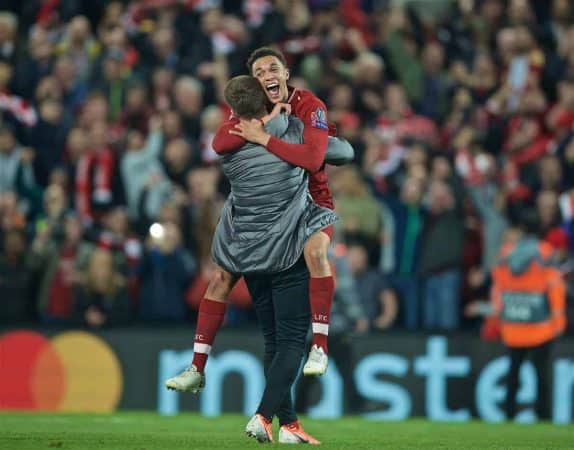 But as the dust settled and the team had retreated back into the dressing room to continue the celebrations, fans remained cemented in their place in the stands. Nobody wanted the night to end.

And then came what George Sephton, the Voice of Anfield for nearly 50 years, described as a “stroke of luck” as John Lennon’s ‘Imagine’ filled the airwaves. First came a collective pause, then a coy smile and finally, a stadium singing in unison.

A song deeply in line with the club and city’s philosophy and the perfect send-off for a night which exceeded even our wildest imaginations.

“Imagine was a stroke of luck rather than a stroke of genius, although Piers Morgan apparently called me a genius on Good Morning Britain the following day,” George Sephton told This Is Anfield

The year the song was released, 1971, coincided with the year Sephton started life as Anfield’s announcer and in the years since both the music scene and his surroundings have changed, as have the practices of match-going fans.

“I look back and something that’s been going through my mind, my music has turned from basically background music into proactive music,” he continued.

“Certainly in the last 15 years, I’ve been trying to help generate the atmosphere, which I think I’ve probably got to a fine art now, but it’s a bit trickier nowadays.

“It certainly changed when the stadium went all-seater. People ask me about the atmosphere then and now, and when I think about it the atmosphere is just as good as it ever was, the difference now is it gets turned on very quickly.

“Before it was an all-seater people would be in the ground sometimes three hours before kickoff and I’d be playing music for three hours and fall back into my chair at kickoff time.

“Now, obviously, everybody that comes to the game has got a piece of paper in their pocket, it says I’m going to get in and it says I’ll be sitting there and I don’t have to worry about it like I did when I was a kid.

“I’d have to make sure that I got to the place early so that I could get in, I’ve been locked out of Anfield more than once in my youth and it doesn’t happen anymore, so people will go into the pub over the road or one of the lounges, or the family park.

“It’s developed into a bit of a routine now where certain bits of music gets played, the last 12 months or so it’s been ‘Thunderstruck’ by ACDC after Peter [McDowall] reads the teams and that’s just been absolutely miraculous – it’s absolutely perfect. I don’t think I’ll change that before I give up because it’s just so good for what it does.”

But how exactly did ‘Imagine’ find itself cementing its place into the memories of those at Anfield and all those watching on after the comeback against Barcelona?

“The comeback against Barcelona was the best ever. The last 15 minutes when all Barcelona had to do was scrape a goal and they were through after all we had done, and so the relief at the end of that was immense. And Imagine was fantastic,” George explained.

“It worked out so well that I banged on ‘You’ll Never Walk Alone’, which I very rarely do at the end of a game. Just as the team lined up and they all stopped there and sang along and then it finished and I’m thinking well everybody can go home now, but nobody was moving.

“I’d run out of music on my memory stick but I have a little pile of CDs just in case anything goes wrong, a selection of stuff that can keep you going for a while. Top of the pile was John Lennon’s Greatest Hits, put it straight on and Imagine came on.

“Everybody stopped and I was thinking this is wrong, and then they started singing and it was just an amazing moment. For days after that, I was getting messages.

“My favourite was a guy watching in a Sydney casino in the early hours of the morning and he said the place was full of all these big rugged guys and they were all in tears. I said to myself I did that and that feeling is so good. The way the whole place came together.”

It won’t be the last time we hear it, however, as while the day when fans can safely congregate on mass at Anfield remains up in the air, a promise has been made and it will be a promise kept.

“I was under strict instructions to play it again when we won the title but obviously certain plans have changed now, but come the great day when the place is full I’ll play it, don’t you worry about it.”

’You may say I’m dreamer, but I’m not the only one. I hope someday you will join us,
and the world will be as one’.