Liverpool youngster Jake Cain has signed a new long-term contract with the club, just 10 months after putting pen to paper on his first professional deal.

Cain is among the new crop of talents to have been called into first-team training under Jurgen Klopp on a regular basis towards the end of the season.

Along with long-standing midfield partner Leighton Clarkson, the 18-year-old has been praised by both Klopp and Jordan Henderson for his contributions at Melwood, with a bright future ahead.

“What we want is to create our transfers internally,” the manager explained at the end of June.

But while Yasser Larouci is already set to depart that group as he eyes a move away and both Leeds and Brentford circle, Liverpool have moved to tie down Cain.

Proud to announce I have signed a new long term contract at this unbelievable club @liverpoolfc the hard work continues???

The club confirmed on Friday morning that the midfielder has signed a new long-term contract, having only agreed his first professional deal back in September.

And though this is no guarantee of a first-team role for Cain, it is a marker of his progress over the course of the season and, seemingly, Klopp’s faith in his ability.

No player made more appearances for the academy this season than Cain (32), who ranked third in terms of goals scored (eight) and created (11); only Jones (27) and Layton Stewart (23) contributed more combined. 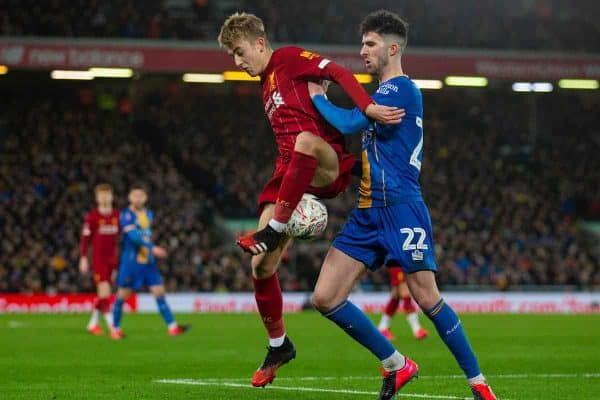 He played the full 90 minutes in the 1-0 win over Shrewsbury in the FA Cup in February, with This Is Anfield’s James Nalton praising him for “keeping things simple and ticking over as part of the midfield group which dominated possession.”

It is unlikely this contract will be the last Liverpool announce this summer, with Williams likely to be the next in line, while Clarkson could be rewarded too.

This is an indication of the quality coming through the academy, with Klopp keen to draw upon his youth ranks to flesh out his senior squad.