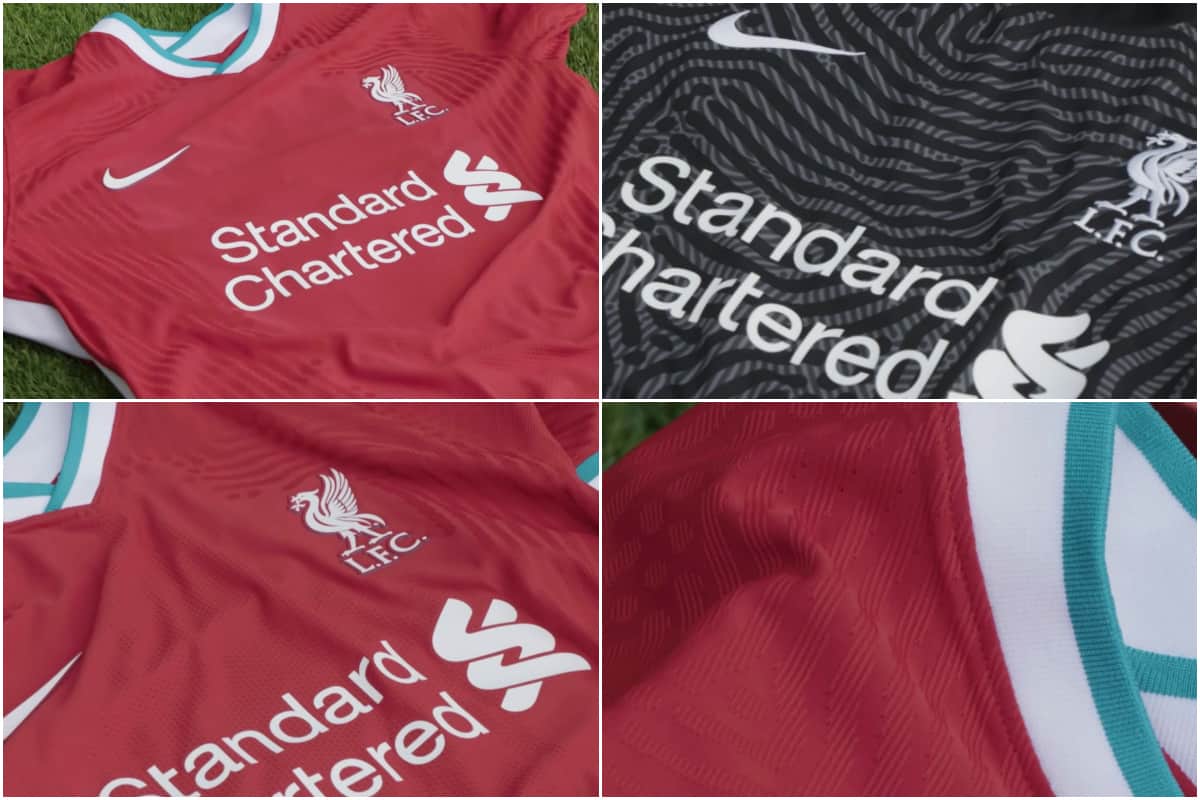 Liverpool have unveiled their new Nike kit for the 2020/21 season, and it is fair to say supporters are divided over the first design from the club’s latest supplier.

The Reds will wear Nike for the first time next season, as part of a new long-term partnership that it is hoped will generate significant funds for the club moving forward.

After a long process and a High Court battle, Liverpool ended their relationship with New Balance, and early on Saturday morning switched their branding to Nike.

The launch has been affected by the current situation in the UK, but Virgil van Dijk, Jordan Henderson, Curtis Jones and Harvey Elliott have all been pictured in the new home shirt.

Van Dijk was also joined by Alex Oxlade-Chamberlain and a host of team-mates to unbox their shirts over Zoom—including Alisson, who will wear all black at home next season.

The outfielders will wear red with white and teal detailing, with this one of the issues fans have flagged when reacting to the unveiling on social media.

* The new Liverpool home kit is available to pre-order from the official Liverpool FC store.

For some, the new kit is a hit…

I can’t be the only one to think this kit is brilliant? A little expensive, but pre-ordered ?

UNPOPULAR OPINION: Best kit we’ve had since 2008 & 2009, finally a home kit that looks clean and not all over the place like previous ones of the past and all the haters will change their minds once they see it on the pitch and especially under the Anfield lights when it’s dark!

Liverpool’s new kit is fine. I especially love the new “will actually be in stock” feature.

The new Nike home kit is alright imo. Let’s not forget New Balance/Warrior made some awful kits but they eventually got it right. I liked the darker red shade from last three home kits #lfc pic.twitter.com/dgQx4e7l3u

Others were left disappointed…

Hmmm….it’s OK. Just a little disappointing that for the first time in years, a “leaked” kit turns out to be real.

“Hugely disappointing, but wasn’t expecting Nike to come anywhere near the NB kits. Let’s hope the extra money is worth it!”

“I was looking forward to seeing something really awesome. To say I’m disappointed is an understatement.”

Hi, it is exact copy of barca away

Just change the color and hope nobody notice
After all of our achievements we deserve more than just a cheap copy@nikefootball design is just pathetic ????? pic.twitter.com/bQzVWf71wH

Why not just red and white?! This pains me! pic.twitter.com/3ZqgxoMEPw

As did the price, with shirts retailing from £70 up…

Seriously @nikefootball. LFC is world, European, BPL champion and you dress us up like a Sunday league team AND charges us an exorbitant amount for it ? https://t.co/gguHKOTRJC

Why so stupidly expensive? Absolute joke. Half-arsed design. Nonsense. What a let down.

For 99 quid I’d wanna play up front as well

One. Hundred. Pound. Its like you don’t want fans buying them!!! Some people have multiple kits to buy how do you justify that price?? And then to sell a cheap knock off for £70!!! How to alienate your fans right there

But other fans offered a rational take on those concerns…

Wait till they’re in full kit, I’m sure those fuming will be OK

“Every kit for the last few years has had complaints on launch. But when we’ve seen it on the lads, most of that has gone away. We didn’t move to Nike for its creative flair, we moved to them for money, supply chain and global reach.”

Liverpool fans: The new Nike kit is terrible, Newbalance did it better

What are your thoughts on Liverpool’s new Nike home kit? Let us know in the comments!