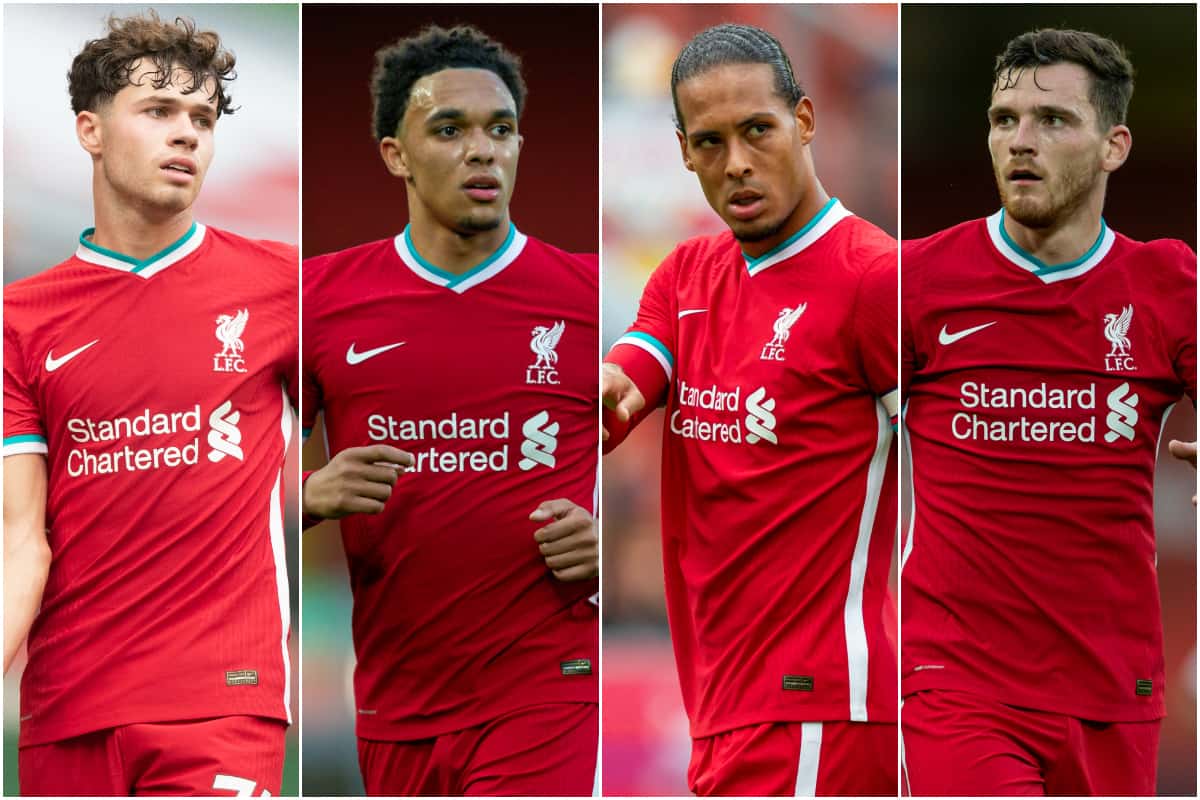 Pepijn Lijnders has given further detail on the way the Liverpool squad helped Neco Williams after abuse from supposed fans, saying “that’s what makes us different.”

It has been a difficult period for Williams personally, as though he remains a key part of Jurgen Klopp‘s squad, the demands on the Reds as Premier League champions ensure heightened scrutiny.

Unfortunately, that has manifested itself in abusive messages from so-called supporters on social media, leading the young right-back to ‘blackout’ his Twitter profile.

Speaking ahead of another likely outing for Williams in the League Cup, Lijnders said that “it’s a weakness if you can get caught up in praise and criticism,” but acknowledged that the 19-year-old is a “doer” who needs support.

Adding to this, the Liverpool assistant manager explained that Trent Alexander-Arnold, Virgil van Dijk and Andy Robertson all spoke to Williams to reassure him of his importance.

“It’s not for me to comment on social media. The only thing I can say is abuse is wrong. Through social media or on the street, it’s wrong,” Lijnders stressed.

“You are not a Liverpool supporter if you don’t support.

“In difficult times, if you say that you are family and together, the most important thing when people say things that are not right or it’s not in the right context, they need to feel full faith.

“Sometimes you don’t need words, because you feel it already with the people around.

That support will be vital to Williams, but it is not only offered to young players when they are subjected to the torrents of abuse that the No. 76 was—it is simply part of the club’s ethos.

Asked about how Klopp keeps his squad ranks—many of whom will be given another opportunity against Arsenal on Thursday night—happy despite their lack of regular starts, Lijnders outlined a “very healthy environment.”

“It’s the environment that we all create in this moment; from our canteen, from our medical…everybody feels 100 percent appreciated, and everybody wants to help each player,” he explained.

“So you don’t have a difference between a young talent of 17 who comes in here or a player who is already established, like a 33-year-old player.

“There’s a very healthy environment, I think, that there are no differences between players. If you’re starting or not, everybody gets the same treatment and attention.

“That makes it healthy and I think especially over the last year we’re using the squad really well, by using rotation but at the same time keeping our collectiveness.

“Everybody feels needed and that’s really important. That’s why we’ve always said we don’t want a big squad with loads of players, everybody should be constantly in the feeling that they are needed.

“And they are needed, if you look closely over this last year.”

Williams’ rise has been facilitated by the faith of Klopp, Lijnders and the first-team staff, and it is a credit to them that they were willing to trust an unproven teenager to, as with Curtis Jones in midfield, occupy a crucial role.

“Step by step, focusing on the small things, and creating space in the squad. That’s the main thing,” Lijnders added.

“Nobody thought Trent Alexander-Arnold, three years ago, four years ago, would have been in this position as the most talented player in English football.

“Trust them, in good periods and bad periods. We know exactly what we can expect from every single one of them. In the difficult times really show faith and give chances again.

“That’s what happens if you’re with us, if you commit to our team and our staff. We will not give up on players easily.

“The most important thing is to create space in the squad. So instead of, for example, buying a second right defender, we have Neco Williams; instead of buying a right midfielder, we have Curtis Jones.