Sheffield United boss Chris Wilder is said to have presented a “detailed development programme” to Liverpool in a bid to convince them to loan him Rhian Brewster.

Mystery continues to shroud Brewster’s future, with the Reds yet to make a final decision over whether he will stay at Anfield this season, head out on loan or even be sold.

It seems most likely that he will depart on another temporary deal to gain more experience, and with the Premier League the ideal destination for the 20-year-old, a number of clubs are queuing up for a move.

Sheffield United are believed to be front-runners in this regard, and the Sheffield Star claim Wilder held further talks with Liverpool over the weekend.

During this meeting he is reported to have presented the Reds with a “detailed development programme,” which he hopes will persuade Jurgen Klopp that Brewster’s development is best served at Bramall Lane.

“[He] is hopeful United’s pressing style—which Klopp also employs—combined with his commitment to nurturing the youngster properly means the German will view United as a more desirable destination,” the report continues.

Wilder is certainly a manager in tune with the demands that will be placed on any loan switch for Brewster, and Klopp has praised the 52-year-old in the past.

He would employ the all-action, high-intensity approach from the striker that Klopp is hoping to nurture in his game, having explained during pre-season that “we want more in the game when he is on the pitch.” 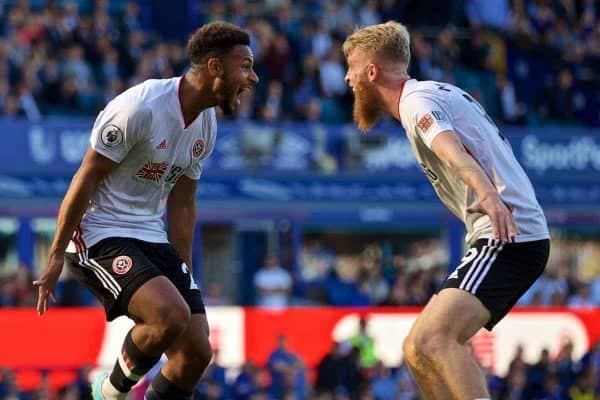 It is questionable whether Brewster would be first-choice striker for the Blades, with the minutes shared between Oli McBurnie, David McGoldrick, Lys Mousset and Billy Sharp last season, but it could be that this was due to never being able to rely upon one consistently.

McBurnie and Mousset were United’s joint-top scorers, with six in all competitions, which is a tally Brewster exceeded with 11 in 22 games in his half-season with Swansea, albeit in the Championship.

With Aston Villa have paid £28 million for Ollie Watkins, Newcastle bringing in Callum Wilson for £20 million and Crystal Palace sealing a loan deal for Michy Batshuayi, the Premier League options may be running out.

Burnley, Brighton and Fulham have also been credited with an interest, but none of those would provide Brewster as suitable an environment as United.

Wilder recently explained that an unnamed final signing he is working on—widely expected to be Liverpool’s No. 24—would “complete the set” for him this summer, and that he is “sure it will be worth the wait.”