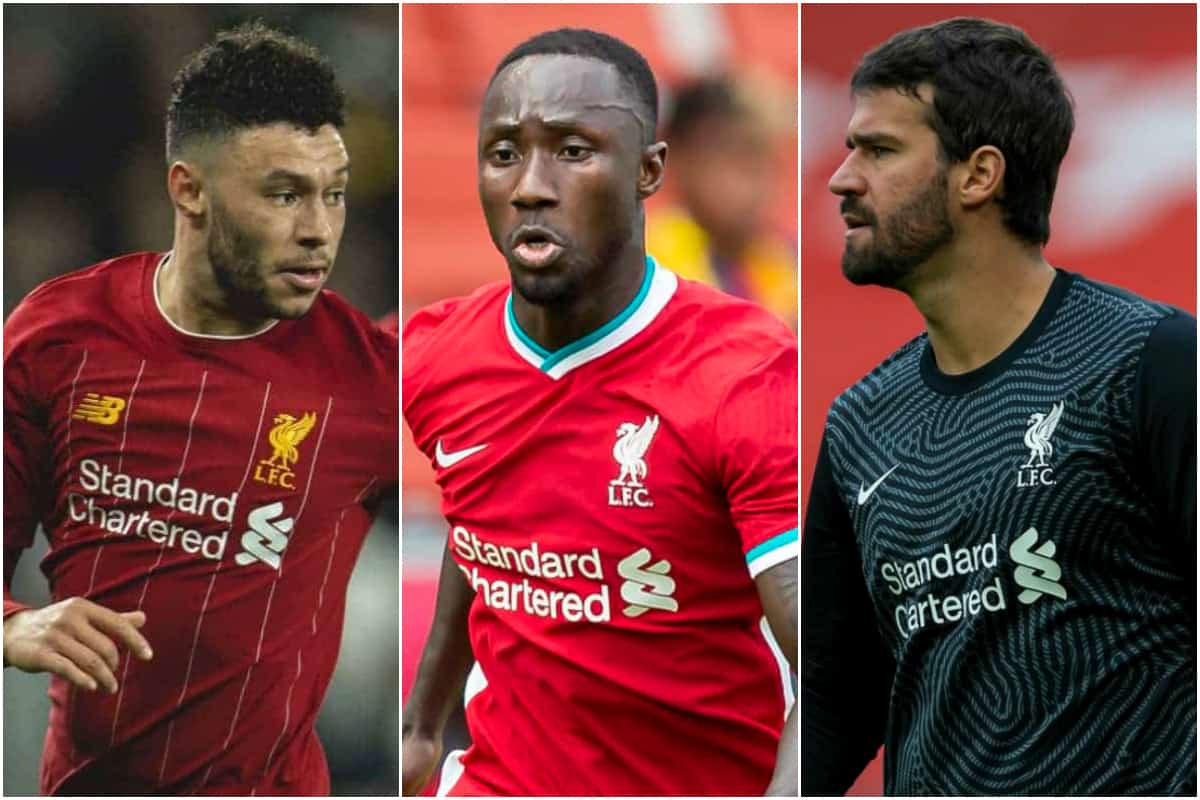 Jurgen Klopp says Naby Keita is likely to be available for Liverpool’s Champions League game with Ajax, while providing an update on four current injury absentees.

The Reds lost Virgil van Dijk at the weekend to a long-term ACL injury, while Thiago Alcantara thankfully escaped a similarly long spell on the sidelines after a couple of shocking challenges in the derby.

There have been reports that Joel Matip could also be out, too, but the central defender was not one of the four who Klopp spoke about to LiverpoolFC.com.

It’s likely the boss will be questioned about his availability in the pre-match press conference on Tuesday, as well as Thiago‘s.

Klopp says the Reds will use Monday as a second recovery day and undergo the usual post-match analysis scenarios, before Tuesday’s training session will determine a starting line-up for our first group stage fixture of 2020/21.

There will still be no Alisson or Alex Oxlade-Chamberlain, though Klopp gives a short, but positive, update on both.

The Guinea midfielder reportedly tested positive for coronavirus over the international break, but communications were suggested as not being clear from the FA to the club.

Liverpool’s No. 8 has been regularly involved this term for Klopp and if Fabinho comes out of the midfield line and Thiago is unavailable for any games, he’ll again have an important role to play – and he’s back in full training at Melwood after receiving a negative result off his COVID-19 test back on Merseyside.

“We are still learning, we are all learning about these kind of things when a boy is completely without symptoms, which Naby was.

“He looked very good yesterday in training, to be honest. But I don’t know how he looks today, how he reacted – that’s much more important then. So, we will see. In the moment, I would probably rather expect him to be involved but I don’t know it.”

His return would give Klopp further options in the centre of the park, where Gini Wijnaldum is also hoping to come back into the side and both James Milner and Curtis Jones were unused subs in the derby.

A superb performance from our new signing was rather dampened by the bad tackle on him which left Klopp, and fans, fearing he’d be out for much longer.

But the Spain international could yet be involved in some capacity – though given the Reds’ squad depth is better in midfield than in defence, it wouldn’t be a huge surprise to see him rested, rather than risked, in midweek.

“[Thiago] got a knock, a proper knock. All the rest, we have to see,” Klopp said.

“It’s not even close to being as serious [as Van Dijk’s injury]. But will he be ready for Wednesday? I don’t know yet. We will see.”

Fellow midfielder Alex Oxlade-Chamberlain hasn’t been seen on the pitch at all in 2020/21 after picking up an injury in pre-season.

Very little has been said about the actual nature of the issue, with the initial news release from the club simply saying he’d miss the rest of pre-season.

Klopp also noted it was “similar to what Hendo had,” referring too his injury against Brighton last season which kept the captain out for around two months all told.

However, it has already been longer than that for Oxlade-Chamberlain and the boss today said it was a “long-term” matter the attacker is dealing with.

“Oxlade is obviously in a long-term rehab, but looks good and is in a good mood usually,” Klopp said.

That’s something of a worry without any specific timetable involved, and the hope will be that the timescale is a relative term, rather than similar to Van Dijk’s absence or Oxlade-Chamberlain’s own previous injury.

In goal, the Reds will persist with Adrian for now until Alisson is back.

There’s improvement in the Brazilian’s fitness and involvement in training, with reports suggesting he may be back in time for the Man City fixture before the next international break.

“Ali looks very good. We have to see; catching balls and stuff like this is all possible. But we cannot rush it and will not rush it,” Klopp said.

“Actually, it’s a common thing every day when I see Ali, I say: ‘How was it today?’ He always with a big smile tells me of the slight improvements. Today I didn’t see him [yet], so I can’t wait to ask for his progress!”

A shoulder injury was initially expected to see our No. 1 sidelined for around six weeks, so there’s still a way to go even if he beats the initial timetable.

Finally, Van Dijk’s absence has naturally hit the squad hard, as they’ll be without one of their leaders all year long.

But Klopp says he’s being positive about it and will have the support of everyone at the club on the road to recovery.

“He will be out for a pretty long time and that’s what the situation is.

“So we feel now in this moment extremely, extremely for him because most of us were in a similar situation and we know that these situations are absolutely rubbish. You don’t need it.

“You don’t need it but you have to get over it and Virgil will get over it, 100 percent, and today is already the first day, if you want, of the recovery.

“We go already in the right direction and so that’s OK and the rest is football and life, like always a challenge, so see what you get and then make the best of it and that’s what we do now.

“It’s always the same, players love to be rather on their own in the moment and to deal in the first moment with it. I am long enough in the business to know that. I was injured myself, I had exactly the same injury if I’m right and it’s not then that you are then pretty chatty.

“We are there for him, he knows that and we will wait for him like a good wife is waiting when the husband is in jail and will do, meanwhile, all what we can do to make it as easy for him as possible.”

Virgil certainly has the support around him to know what he’s going through, with Ox, Joe Gomez and seemingly Klopp himself all having travelled the same path.

One by one the manager will hope to get these players back and available – in the meantime, the squad is strong enough to keep winning and playing well with those who remain fit and challenging for a regular place.