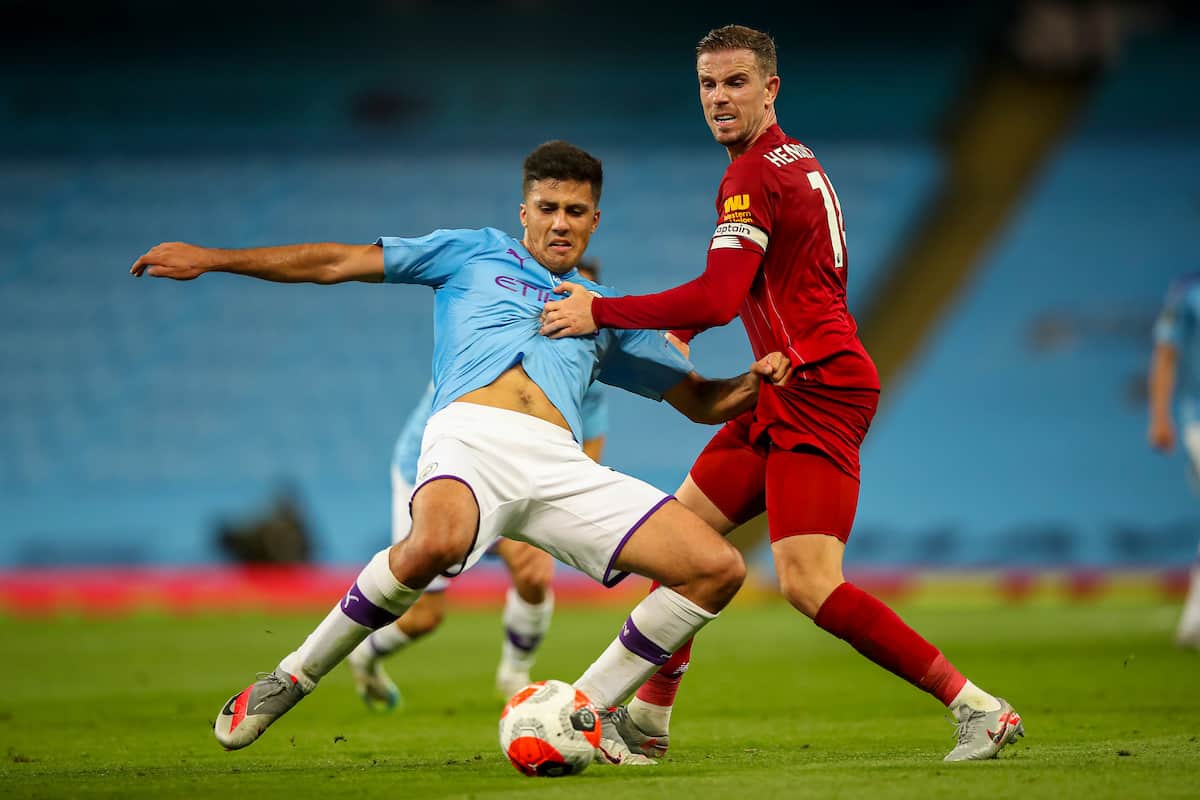 It’s one of the biggest games in the calendar for Liverpool in respect to their title ambitions and the next instalment presents an early chance to create a buffer between themselves and Man City.

The Reds will make the short trip to Manchester on Sunday for a game which has provided plenty of on and off-field drama in recent years.

Liverpool are, of course, the reigning champions having ended Pep Guardiola’s two-year hold on the Premier League title after a relentless campaign which saw them finish 18 points ahead of City.

For Jurgen Klopp’s side, the 2020/21 season has thrown up a myriad of hurdles to overcome in the early stages, most notably the long-term injury to defensive pillar Virgil van Dijk.

And yet they have picked up 16 of a possible 21 points having found ways to win when not at their best – where their latest run has seen them win the last five in all competitions.

City, meanwhile, have had some early season wobbles following on from a delayed finish to last season, with just 11 points acquired in six games having lost to Leicester and registered two draws against Leeds and West Ham – and they have a game in hand.

Although they have struggled to replicate the air of invincibility and consistency which they once possessed, it remains all-important to take points away from them at every opportune moment.

And ahead of the Reds’ clash with City, we take a look at some of the decisive decisions to be made and the recent records to turn around. 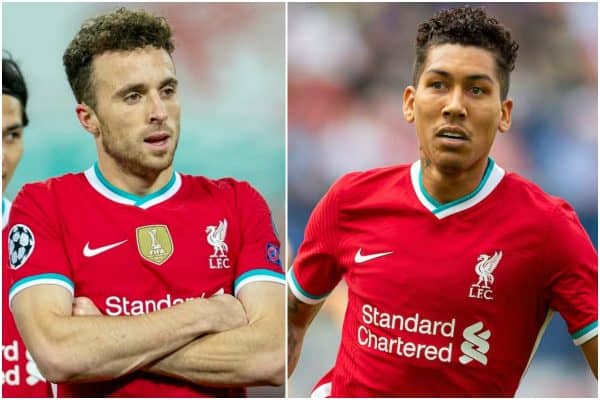 It’s the question on everyone’s lips with Diogo Jota the in-form man while Roberto Firmino has shown signs of fatigue and was rested in Italy while the No. 20 caught the eye with a dazzling hat-trick.

We’ve seen the new ‘fab four’ on the field from the off on one occasion already this season, at home to Sheffield United, but a trip to Man City doesn’t scream as the next game to try it.

It’s not hard to see why Jota could win the popular vote after a scintillating start to life at Anfield, but the electoral college is likely to swing for Firmino and his know-how in games such as this.

Prior to the game, Klopp was not in the mood to dive into some of the criticism which has come Firmino’s way, saying: “I can’t help these people, sorry. If they don’t see it I cannot help them.”

It will render neither of them as second-choice once the decision is handed down but in a game so often decided by the finest of margins, all eyes will be on Klopp’s team sheet come an hour before kick-off.

In the end, it is a welcome ‘dilemma’ to have as having a number of players knocking on the door for selection is only to the benefit of the team.

It’s not been the best of times for a senior centre-back at the club with a number of injuries post the October international break rendering Joe Gomez as the sole option in the heart of the defence.

To Liverpool’s credit and the ability of both Nat Phillips and Rhys Williams, who will still be needed throughout the season, they have navigated the challenge without a misstep.

Five successive victories, three clean sheets in the Champions League and just two goals conceded in that timeframe make for good reading, as does the return of Joel Matip.

Caution was opted for over the No. 32 in midweek and after over a week in full training, he is back in the mix at the most crucial of times for the trip to City.

It would be a gamble to give Phillips or Williams the nod despite their bright showings in recent weeks, and Matip will provide a timely boost.

Notably, it would be the first start for a Gomez and Matip pairing at centre-back, with the duo’s starting lineup appearances together to date having seen the former feature at right-back.

While not a team to look to aerial duels, especially with a 6’5″ frame to contend with, Matip’s experience and familiarity within the side will prove invaluable against a City side who have scored just one goal in each of their last three league outings.

Time to Turn Around Etihad Woes

The Etihad Stadium has not exactly been a happy hunting ground for Liverpool in recent memory with three defeats, a draw and one win across all competitions dating back to early 2017.

For the Reds, the aggregate scoreline reads 13-4 in favour of City on their home soil, with the only victory coming in the Champions League in 2018 where Liverpool emerged as 2-1 victors.

While two heavy defeats in the case of the 5-0 and 4-0 can be placed into the context of losing Sadio Mane to a red card in the former and the haze which was winning the league days earlier for the latter, taking four points from a possible 15 is far from ideal.

And now is the perfect time to turn their fortunes around at the ground and register their first win in the league since 2015, when Klopp’s men secured a 4-1 victory in the early days of his tenure.

Man City’s defeat to Leicester came on home soil and they have shown they are not as consistent as previous years and while neither team have found their stride, there is no better time than the present to inflict a further psychological blow.

With Van Dijk out of the picture, many assumed the Reds would not be able to respond in a positive fashion, but they have done just that in the five games which have followed and the water is now murky over the advantage rivals thought they may have.

It will not be an easy task as previous meetings home and away have shown, but Liverpool ridding themselves of their Etihad woes by leaving on a winning note will extend their lead over City to eight points and see them bounce into the international break.