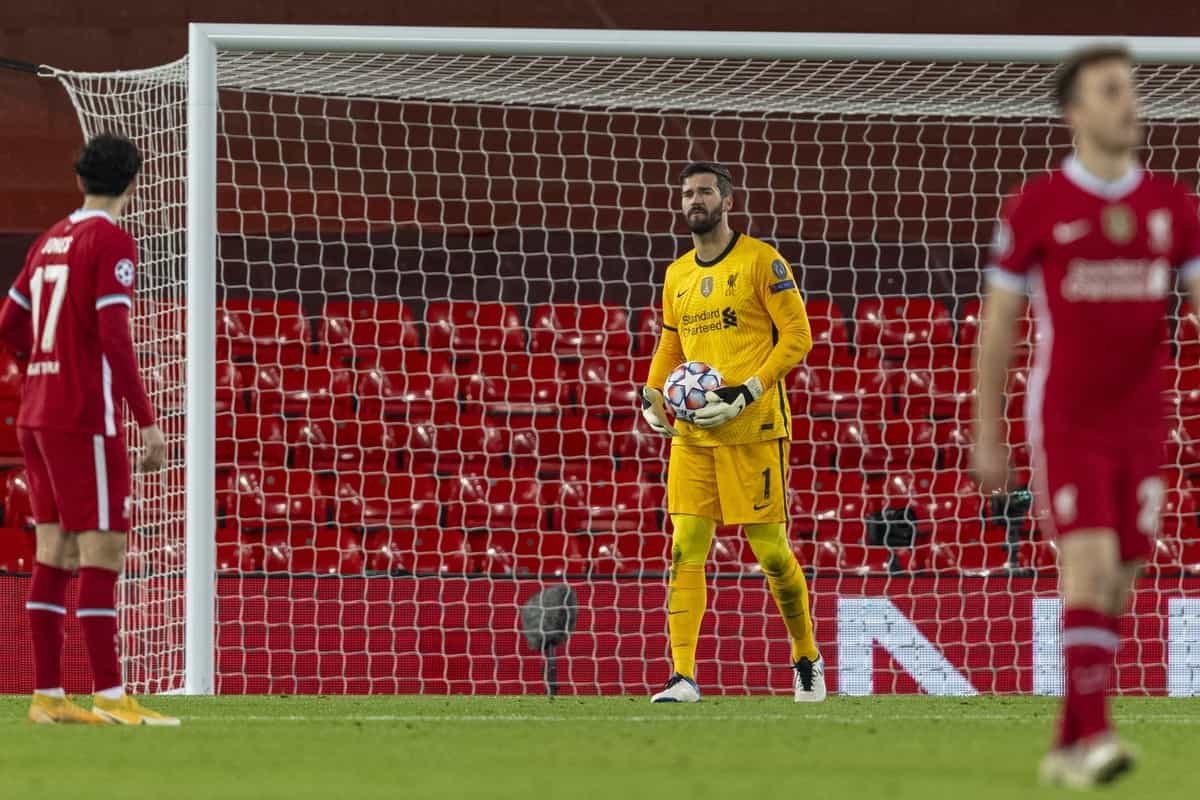 Liverpool were beaten 0-2 at home to Atalanta on Wednesday night, with the performance lacking and fringe players under-performing.

The Reds hosted the Serie A side in their Champions League Group D clash, with victory for Jurgen Klopp‘s men sending them into the last-16.

That never looked like materialising, however, as a much-changed Liverpool looked flat from the start, barely creating a chance across the 90 minutes.

After the break, Atalanta pulled away from the Premier League champions, with Josip Ilicic and Robin Gosens scoring for the visitors.

The result is no disaster, but nevertheless, it is not a night that Klopp will want to remember in a hurry.

It’s fair to say the match wasn’t a classic…

Well, that was chalk and cheese. It's been a long time since I've covered Liverpool in Europe where they went from sparking, to flat, against the same opponent, in quick succession. pic.twitter.com/dQTN06jiO7

Not sure I was expecting too much given the amount of lads missing but I was probably expecting more than this.

Loads of days off on that pitch tonight. Fair, the fixtures are thick and fast but turned up like they’d just win.

Well that was utter shite. Mad, I can’t think of one match that we didn’t have at least a moment under Klopp. Absolutely nothing tonight. #LFC

“We played with no desire and hunger.”

“Didn’t look like we wanted to win that and played as such.”

– RedSeven on the forums.

Tonight is like exiting the League Cup; you’d rather win but you couldn’t really be arsed, all the same.

The only good thing to come out of that 90 minutes was Liverpool not picking up another injury.

The three earlier wins, two away from home, gave us this a safety net for this game. If we got out of it injury free (which it looks like we have, touch wood), then it’s just one of them; a very rare blip. We were crap though.

Come on then, the last time Liverpool went a whole game without a shot on target at Anfield. Who has the stat?

Some were staying level-headed, though…

Not overly bothered by that, but I do think Klopp's starting line-up was neither one thing or the other. Frustrating not to put the group to bed, but we'll still qualify.

Bad night for #LFC but context always important. With the injuries we have and have had plus a tough start in PL & a tricky CL draw we are still top of the pile in both. Will get a few hits on the way this season but will move on quickly. No need to over analyse.

“No point in getting annoyed with tonight’s performance. We’re in a strong position in the group and really that was a game we can afford to lose.”

“Just a bad night at the office, we never do things the easy way.” – RedOpium on the forums.

This result was always a possibility with the injuries and changes. Senior players were amongst those who didnt play well, not just down to rusty fringe players or youngsters learning the game. No injuries, a stronger XI vs Brighton & LFC will still top the CL group.

Poor performance all round. Hard to think of anyone who played anywhere near the level they're capable of. Shake it off, learn from it and be better next time. Fair play Atalanta who deserved their big win

I feel so bad because of the goals he’s scored for us, but Origi just isn’t good enough for this football club.

Origi’s touch is heavier than Rooney when he used to return for pre-season.

“Once again Origi proving that he’s useless has been for a few years, no idea why he’s anywhere near the team!” – Andy Brown on Facebook.

“For me Klopp set the tone picking Origi.”

I really struggle what Divock Origi does on the pitch, he doesn’t offer anything anymore.

I’m gonna need Origi to walk off the pitch

Origi has been eating off those UCL goals against Barca and Tottenham for long enough. We need to bin him asap.

And a response at Brighton on Saturday was predicted by some…

Not often you say it, but #LFC deservedly beaten in the end tonight. Jurgen Klopp’s team selection clearly dictated by the schedule but he’ll be even more desperate to get the win at Brighton now to show the value of the big calls he made this evening.

The two brilliant away results gave us a massive safety net. Ideally we wouldn’t have needed it and could rotate even more in the last 2. But these nights don’t half to us often so they can be easily excused and forgotten. One thing that’s certain, Klopp ALWAYS gets a reaction.

Really off performance by us, thoughts on the match? #LFC

Hoping to rebound against Brighton!