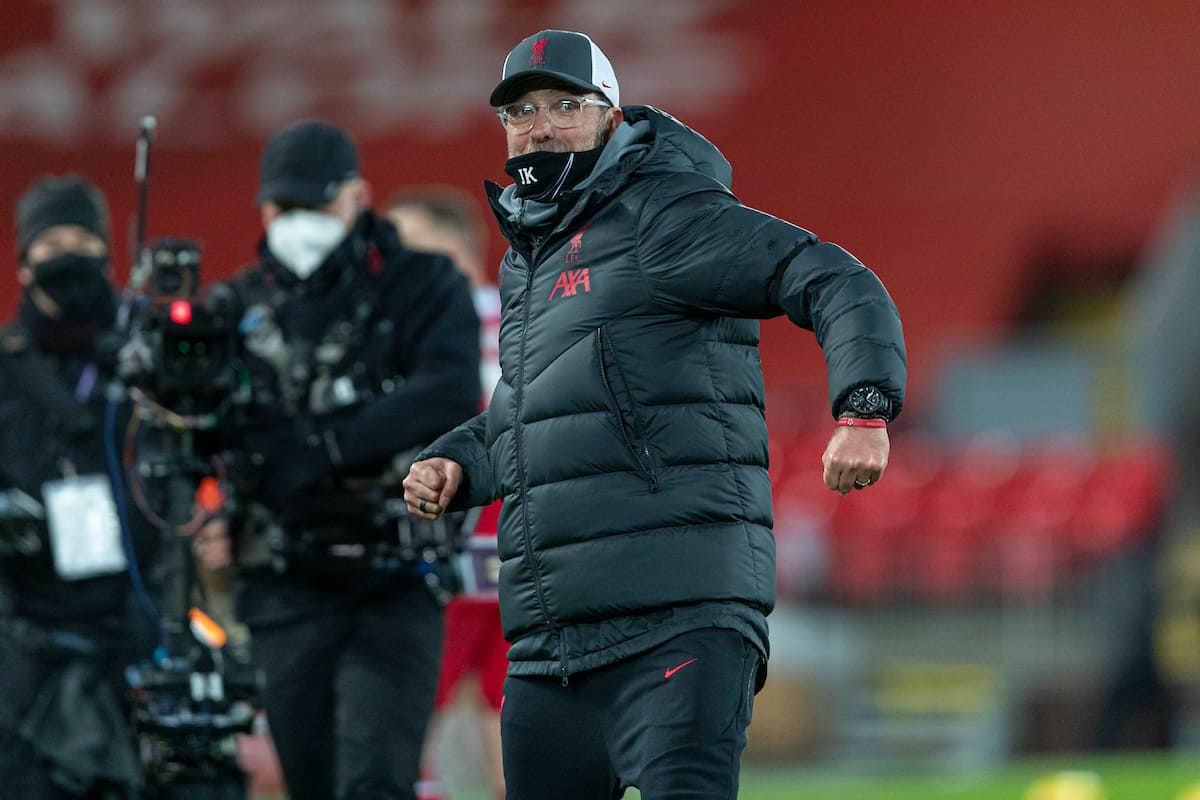 Tottenham came to town top of the table, but left after being beaten and usurped by a more adventurous side. Steven Scragg breaks down another classic Anfield 90 minutes.

Jose Mourinho is a complex character. His teams tend to be incredibly focused and well organised. Reliant upon pace and a counterpunch, they are built upon resolute defending; they are teams that tend to mix silk with steel in midfield and opt for a big personality up front. It is a pragmatic approach to football.

What Mourinho then does, is shroud his squad within a siege mentality. If he doesn’t view an individual or collective as being part of his project, he makes a deliberate enemy of them, a concept that is even applicable to some of his own players, while he makes those he sees as his chosen few feel like they’re ten feet tall.

It equates to a form of bullying.

Then you have the contradictions. Mourinho’s sense of do as I say, not as I do, is the stuff of legend. A man who once gouged the eye of a member of the opposing coaching staff, calling a rival manager as being out of order, can only be laughed at.

Changing of the guard 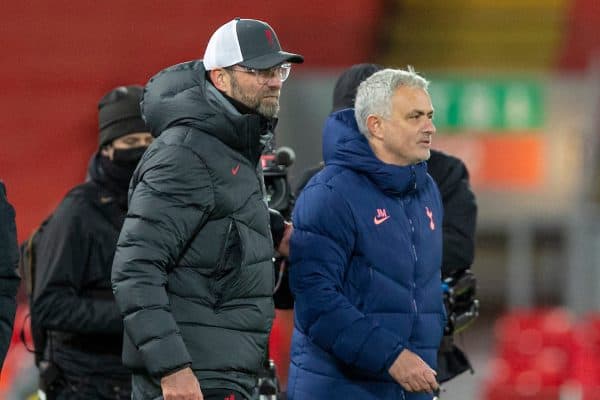 All jibes aside, there is more to Mourinho than parking the bus, and he is very good at the brand of football and psychology he elects to peddle.

In an era of expansive football, he has largely been viewed as yesterday’s man in recent seasons, a man with no answer to the free-thinking Jurgen Klopp and Pep Guardiola.

For those other ‘Big 6’ teams trying to play catch up with Liverpool and Manchester City, Chelsea have placed their faith in Lampard – a man who leans toward a more open version of Mourinho’s teachings – while Arsenal have aimed to spin off some of the Guardiola magic in the form of Mikel Arteta and, in Ole Gunner Solskjaer, Manchester United seem to be lost somewhere between trying to get in touch with their 1990s highs and sacking their manager in favour of Mauricio Pochettino.

Even on the outside of that ‘Big 6’ bracket, Leicester City employ Brendan Rodgers, and Everton’s manager is Carlo Ancelotti. Southampton are prospering under the progressive Ralph Hasenhuttl, while Nuno Espírito Santo paints attractive pictures at Wolves.

Tottenham are a year into a more pragmatic movement, however. They’ve gone against the common grain. The only other manager at the helm of a team in the top half of the Premier League, after the midweek round of games, that fully shares Mourinho’s ideals, is David Moyes. 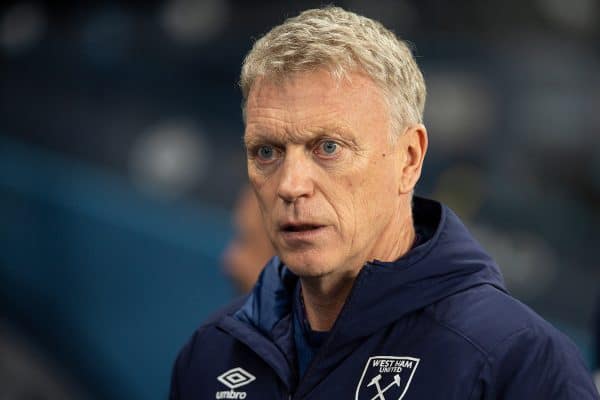 Mourinho is timing his run to perfection, however. The Tottenham hierarchy looked at the Premier League and saw that under Pochettino they were always going to be capable of some wonderful football, but they were never going to bridge the gap to becoming a team that can win the biggest prizes.

Just months beyond losing the Champions League final, they ditched expansion and swooped for a man who has made a career of bludgeoning his way to glory.

You can’t argue with Mourinho’s honours list. Tottenham looked at it and went for the gamble. When you’ve gone without a trophy since 2008, an inevitable descent into rancour with Mourinho is probably a price worth paying, if trophies can be won en route.

I completely get it, and for what it’s worth, I think the plan will work. Mourinho will eventually depart North London under a cloud, but he will deliver Tottenham a trophy or two beforehand.

What is working in Mourinho’s favour, is that expansive football is suffering a bit of a crisis of confidence.

Liverpool have reclaimed the top of the Premier League, but in no way have we hit the heights of the football we’ve played in previous seasons, so far.

Added to this, Guardiola is into unchartered territory at Eastlands. Now in his fifth season with Manchester City, never has he managed a team for this long before. His team have lacked consistency and should he fail to deliver either the Premier League or Champions League this time around, then the difficult questions will be posed. He might even become vulnerable.

Arsenal appear to be consuming themselves, while Old Trafford has returned to the 1980s. Lots of noise and self-aggrandisation when they do well, hide under a rock when it all goes wrong, with little on-pitch profit to be seen.

Ancelotti’s Everton and Rodgers’ Leicester will make intermittent pretty patterns, as will Bielsaball over at Leeds United, but their glass ceilings are to be found at fourth place. 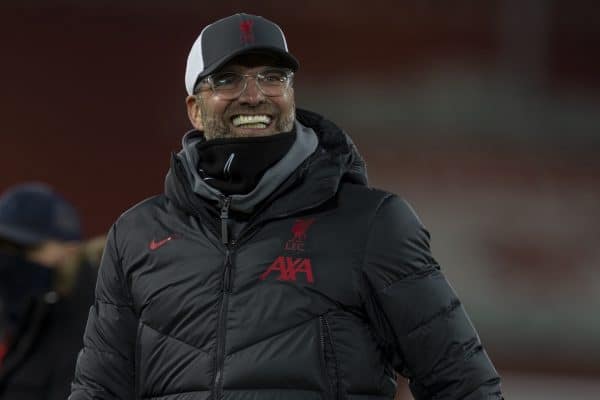 Tottenham though, are in the right place at the right time, as this season is ripe for a Machiavellian percentage player, the environment is perfect for a technical genius, armed with some impressive card tricks and a propensity for sleight of hand.

In Klopp however, much of Mourinho’s tried and trusted shadow puppetry simply won’t make an impact.

During the build-up to Wednesday’s game, while Mourinho dealt in talk of being sick and tired of Liverpool’s injuries being cited as often as they are, Klopp was busy killing Tottenham with kindness. It was a case of Mourinho’s barbs vs Klopp’s compliments.

After the game ended, with the aroma of Bobby Firmino’s late winning goal still swirling around Mourinho’s nostrils, Klopp met his counterpart’s assertion that the best team lost, by laughing in his face. No irony involved.

We had just witnessed a compelling game where two differing football ethos’ had met head-on. A game that wasn’t just a top of the table clash, but one that might prove, in the long run, to have been one that fought it out for the very soul of the season.

For the opening third of the game, Tottenham were pinned back, unable to break free of their own half. Our goal had a stroke of luck to it, yet it was a deserved one. We’d carved other chances without being ruthless enough with them. The visitors looked disorientated.

Son Heung-min scored a fine equaliser that VAR found no fault with. Exactly the type of goal that Mo Salah or Sadio Mane would have seen ruled out by the same method. From here, Tottenham had the clearer chances, until Firmino’s winner. A post was hit Steven Bergwijn, a header was fluffed by Harry Kane.

Tottenham were profligate with their hard-earned chances and paid a heavy price. Liverpool, meanwhile, attacked with zeal and will always fight to the last. Goals will come. The fear opposing teams must be gripped by in the last five minutes of games against us must be intense.

As things stand, Tottenham look set to be our most likely rival for the Premier League title this season.

I’d like to think, now we’re top of the table, that we won’t come down from here on in. We’re Liverpool though, and life isn’t that simple. Is it?

Yet, at some point, the Thursday night to Sunday afternoon post-Europa League routine will disagree with Mourinho’s side eventually, and with a League Cup semi-final theirs to grasp, plus Marine to face in the FA Cup, domestic cup commitments will debilitate.

All of which is layered on top of the psychological blow of having the top of the Premier League ripped from their grasp by the ruthlessness of champions.

It is going to be an interesting ride, and if Tottenham are the team to go toe-to-toe with us between now and May, then it will be a very different experience to dueling it out with Guardiola.